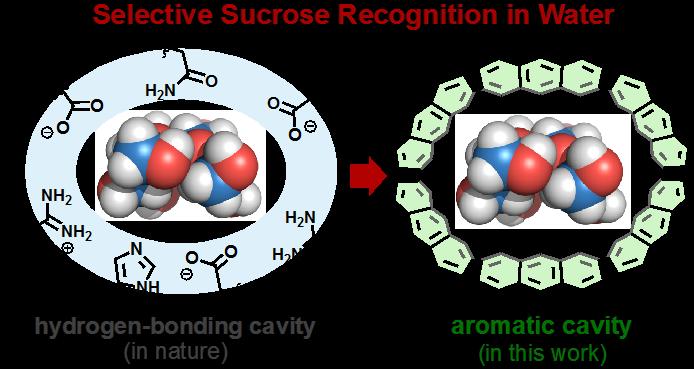 Conceptual cartoon of how a bioreceptor (left) and a Yoshizawa’s nanocapsule (right) bind sucrose in their cavities. Source: Science Advances

Scientists around the world are pursuing the goal of developing synthetic receptors capable of recognizing biologically important molecules. Although many attempts have been made to mimic the way that protein pockets detect sugar dissolved in water with hydrogen bonding interactions, few have succeeded, mainly due to the interfering nature of water molecules. Now, a Japanese team of researchers has proposed a brand new approach.

“Our unique recognition system is based on special interactions — known as CH-π interactions[term1] — between sucrose and the inner walls of our nanocapsule,” says Michito Yoshizawa, who co-designed the study with Masahiro Yamashina at Tokyo Institute of Technology (Tokyo Tech). “To our knowledge, nobody has harnessed the interaction for developing this type of recognition system before.”

With a diameter of one nanometer (a billionth of a meter), the spherical cavity of the capsule is just the right size to catch the nearly one-nanometer-long and spherical sucrose molecule. Building on the team’s previous research on molecular self-assembly, the capsule works by forming a cavity around the sucrose, which then becomes fully surrounded by multiple aromatic panels[term2] (see Figure 1).

By mixing the capsule, composed of two metal ions and four ligands[term3], with sucrose in water under mild conditions, the team obtained a sucrose-bound capsule with a high yield. Published in Science Advances, an open-access sister journal of Science, the product structure was confirmed using proton nuclear magnetic resonance and mass spectrometry methods. Yoshizawa adds: “The capsule is easy to produce and handle, and its stability is very high.”

In a series of experiments to explore how the capsule would respond to different kinds of sugar, the researchers made three observations: 1) the capsule does not interact with monosaccharides such as glucose and fructose, 2) among common disaccharides (for example, sucrose, lactose, maltose and trehalose), only sucrose was encapsulated, and thus 3) even in mixtures of two disaccharides (in so-called competitive binding experiments), the capsule bound sucrose with a 100% selectivity.

“It’s usually very difficult to tell these sugars apart. For example, sucrose, lactose and maltose have the same molecular formula, meaning that they have the same number of hydrogen, oxygen and carbon atoms — only their configuration is different,” says Yoshizawa. “Still, our nanocapsule was able to recognize subtle differences and exclusively capture sucrose.”

This finding could impact the food and chemical industries by helping with the search for even sweeter compounds. If such new compounds can be found and synthesized easily, artificial sweeteners could be produced more cost-effectively than existing methods.

In future, Yoshizawa says that it may be possible to develop “designer nanocapsules” of various shapes and sizes. Ultimately, these capsules could be used for the development of new biosensor technologies in the medical and environmental fields.