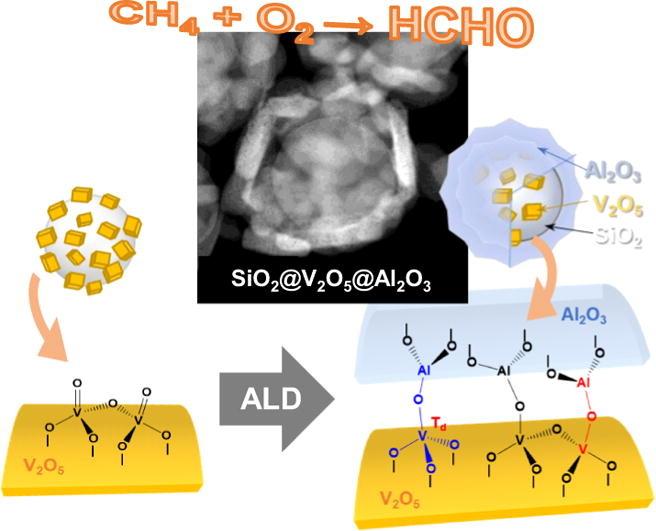 Researchers from the Ulsan National Institute of Science and Technology (UNIST) have developed a methane oxidase catalyst that consists of nanomaterials that enable a stable structure and high reactivity at high temperatures to efficiently convert more than twice as much methane to formaldehyde than current methods.

Similar to petroleum, methane can be converted into useful resources through chemical reactions. In recent years, particular attention has been placed on shale gas, the main ingredient in methane, as a source of natural gas.

However, because the chemical structure of methane is incredibly stable, it does not react easily to other substances, making the shale gas difficult to extract. Thus far, methane has primarily been used as a fuel for heating and transportation.

To cause a reaction that changes the chemical structure of methane, a temperature above 600 degrees Celsius and a catalyst having a stable structure and maintaining reactivity under high temperatures is required.

The nanomaterial catalyst includes a core-shell structure that consists of vanadium oxide nanoparticles that are surrounded by a thin aluminum film shell that protects the grain and keeps the catalyst stable. This structure will even remain stability and reactivity at high temperatures.

During testing, the vanadium oxide nanoparticles without the aluminum shell had a structural loss at 600 degrees Celsius, while losing catalytic activity. When the nanoparticles were added, the catalyst remained stable and increased the efficiency of converting methane to formaldehyde by more than 22 percent.

“The catalytic vanadium oxide nanoparticles are surrounded by a thin aluminum film, which effectively prevents the agglomeration and structural deformation of the internal particles,” Euiseob Yang, from the Department of Chemical Engineering at UNIST and the first author of this study, said in a statement. “Through the new structure of covering the atomic layer with nanoparticles, Thermal stability and reactivity at the same time.”

UNIST professor Kwang-jin Ahn said while they have made great strides in developing the catalyst, they plan to further improve this process.

“The high-efficiency catalyst technology has been developed beyond the limits of the technology that has remained as a long-lasting technology,” Ahn said in a statement. “The value is high as a next-generation energy technology utilizing abundant natural resources. We plan to expand the catalyst manufacturing technology and catalyst process so that we can expand our laboratory-level achievements industrially.

The study was published in the Journal of Catalysis.