A technology that has shielded some of NASA’s highest-profile space observatories from potentially harmful molecular contamination is now being evaluated as a possible solution for protecting the Smithsonian Institution’s cultural artifacts and natural-science specimens.

Under a Space Act Agreement with the Smithsonian Institution’s National Museum of Natural History, Nithin Abraham, a thermal-coatings engineer at NASA’s Goddard Space Flight Center in Greenbelt, Md., and museum conservators are testing the effectiveness of the patent-pending Molecular Adsorber Coating, or MAC. Goddard engineers originally created the technology to entrap outgassed molecular contaminants so that they couldn’t adhere to sensitive instruments and components.

Made of zeolite, a mineral widely used in water purification, and a colloidal silica that acts as a glue, MAC is highly permeable and porous — attributes that allow it to trap contaminants that outgas in a process similar to what creates the new car smell in vehicles. Because it doesn’t contain volatile organics, the coating itself doesn’t cause additional outgassing. Easy to use, the coating can be applied directly to the hardware itself or on varying-sized panels that are inserted inside instrument cavities and test chambers.

Under the one-year research effort begun last summer, Goddard and museum personnel are determining whether MAC can reduce the presence of mercury vapor and other contaminants that offgas from plant and mineral specimens. These contaminants are tainting specially designed metal cabinets at the Museum Support Center in Suitland, Md., a sprawling storage facility that holds more than 54-million collection items.

These offgassed chemicals pose health risks to humans and degradation to specimens, said Collections Program Conservator Catharine Hawks, who has used a wide range of techniques and materials to take up and hold vaporized contaminants in both exhibit and stored specimens. “Conservators are constantly faced with problems of volatile contaminants — either cross-contamination among collection materials or contaminants that come from materials used with collections,” she says. “Consequently, we’re always in need of technologies to provide protection.”Learning of the Goddard-developed coating, Hawks says she and other museum conservators thought it worthwhile to explore MAC’s effectiveness in artifact protection. Abraham agrees: “We thought this collaboration presented us with an interesting opportunity to explore how MAC would perform in terrestrial environments,” she says. “We have quite extensively tested the coating to mitigate outgassing in vacuum environments for space applications, but not in ambient conditions.” 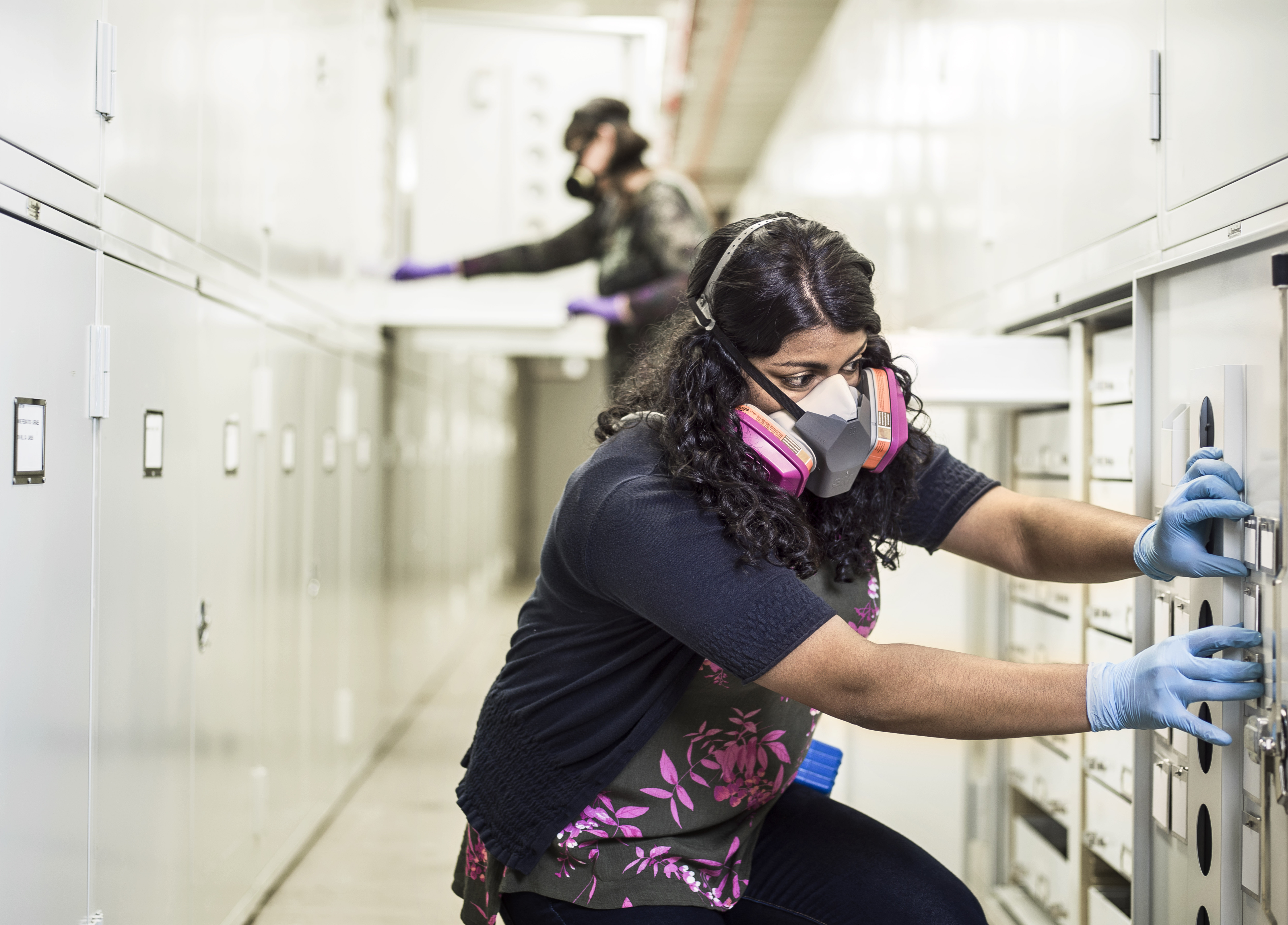 To date, NASA engineers have used the coating to entrap hydrocarbons, plasticizers, and silicones that outgas and spread easily inside thermal-vacuum chambers and other test facilities. To prevent these contaminants from affixing, Abraham and her team treated specially made panels with MAC and placed them in strategic locations inside these facilities. The James Webb Space Telescope, the Advanced Topographic Laser Altimeter System (ATLAS), the Global-scale Observations of the Limb and Disk (GOLD), and the Magnetospheric Multiscale Mission (MMS), among others, have all benefited from MAC, Abraham says.

However, its use hasn’t been restricted to ground-based vacuum chambers. NASA’s Ionospheric Connection Explorer, or ICON, mission, which is studying the dynamic zone in the atmosphere where Earth weather and space weather meet, makes use of the coating.

“This is the first flight application of MAC within an instrument cavity,” Abraham says. Several MAC-treated plates will mitigate on-orbit molecular outgassing within ICON’s sensitive far-ultraviolet instrument. In addition, NASA’s Global Ecosystem Dynamics Investigation, known as GEDI, also plans to fly the coating when it launches in November 2018.

The goal of the museum experiment initially focused on determining if more than 100 MAC-treated samples affixed to the doors of three storage cabinets could adsorb mercury vapor from both botanical and mercury-based mineral ores. Although the museum never used mercury-based chemicals to preserve its plant specimens, Hawks said many collectors and preparators used them widely for nearly two centuries. Given the fact that the Smithsonian’s collections come from institutions worldwide and, in some cases, are very old, mercury offgassing has become a persistent problem.

The more recent use of vapor-impermeable bags has helped mitigate the offgassing, Hawks says. However, before their use, the mercury vapor had already contaminated the cabinets and is proving resistant to cleaning. “We wondered if MAC panels could be used to take up the residual vapor that is coming from these surfaces,” she says. The experiment has since been expanded to determine exactly which contaminants MAC adsorbs in ambient conditions, where atmospheric offgassing of materials occurs.

After spending a year affixed to the doors, it’s not yet clear whether MAC is effective at trapping mercury vapor. “It’s been a challenging yet insightful process evaluating this,” Abraham says. Abraham’s team will collect all the samples by early August and is now testing earlier exposed samples to see what chemical constituents the coating did collect. However, initial analysis has indicated that the samples are trapping a number of other contaminants. She expects final results in a couple months.

“We really won’t know how well the MAC is working until after Nithin completes the analysis. Whether or not the MAC is successful for mercury, we’ll be very interested in knowing about any chemical species the technology adsorbs,” Hawks says.

Abraham is equally interested. The collaboration allowed her to study how well the technology works in ambient or non-vacuum conditions, and how she and her team could possibly tailor the coating to make it even more effective for both space and terrestrial applications. She also believes this work could lead to future museum collaborations, which could lead to additional technology improvements, to say nothing of the potential licensing opportunities with companies that manufacture cabinets for specimen storage.

“This was a definitely a worthwhile learning experience,” Abraham says, adding that the team plans to write a technical paper about the coating’s effectiveness once testing is complete. “We have gained valuable knowledge on better ways to test the coating and advance the technology for distinct applications.”