Before moving NASA’s James Webb Space Telescope, and to assure that it’s kept clean and safe, Webb got a very special wrapping treatment. The wrapping acts as a “mobile cleanroom,” safeguarding the technological marvel from contaminants.

All satellites and observatories are created in cleanrooms. Cleanrooms filter out harmful contaminants, as even a speck of dust or a fingerprint could severely damage the sensitive instruments. So, to move satellites from place to place, as necessary during construction and testing, they need to be placed in a mobile cleanroom.

The mobile cleanroom, also known as the In-Plant Transporter, looks like a big silver box. Nestled inside, and visible through the translucent wrapping, is the Webb flight spacecraft element, comprised of the spacecraft bus and sunshield.

The mobile cleanroom is, essentially, a giant sealed bag that is purged with clean, dry air injected from pressurized bottles though a flexible tube. A small leak is included in the design so that the container can maintain positive pressure by releasing clean air while blocking air inflow. This same idea is applied to clean tents and cleanrooms in buildings, which is evident when we open a door on a cleanroom and positive pressure inside the cleanroom forces air out in a gust and prevents dirty air from flowing in.

The spacecraft element recently was moved to a facility where it will undergo vibration and thermal-vacuum testing. In order to move it around, the spacecraft element is folded up, like it will be for launch.  Even in this “stowed” condition, it still is about as large as a full-size school bus standing on end, and so requires big equipment to move it from one place to another and keep it clean during final assembly and testing.

After all the vibration and vacuum testing is completed, the Webb spacecraft element will be re-wrapped and returned to a cleanroom at Northrop Grumman’s facility in Redondo Beach, California, where it will be assembled with the telescope element to form the full observatory that will fly in space. 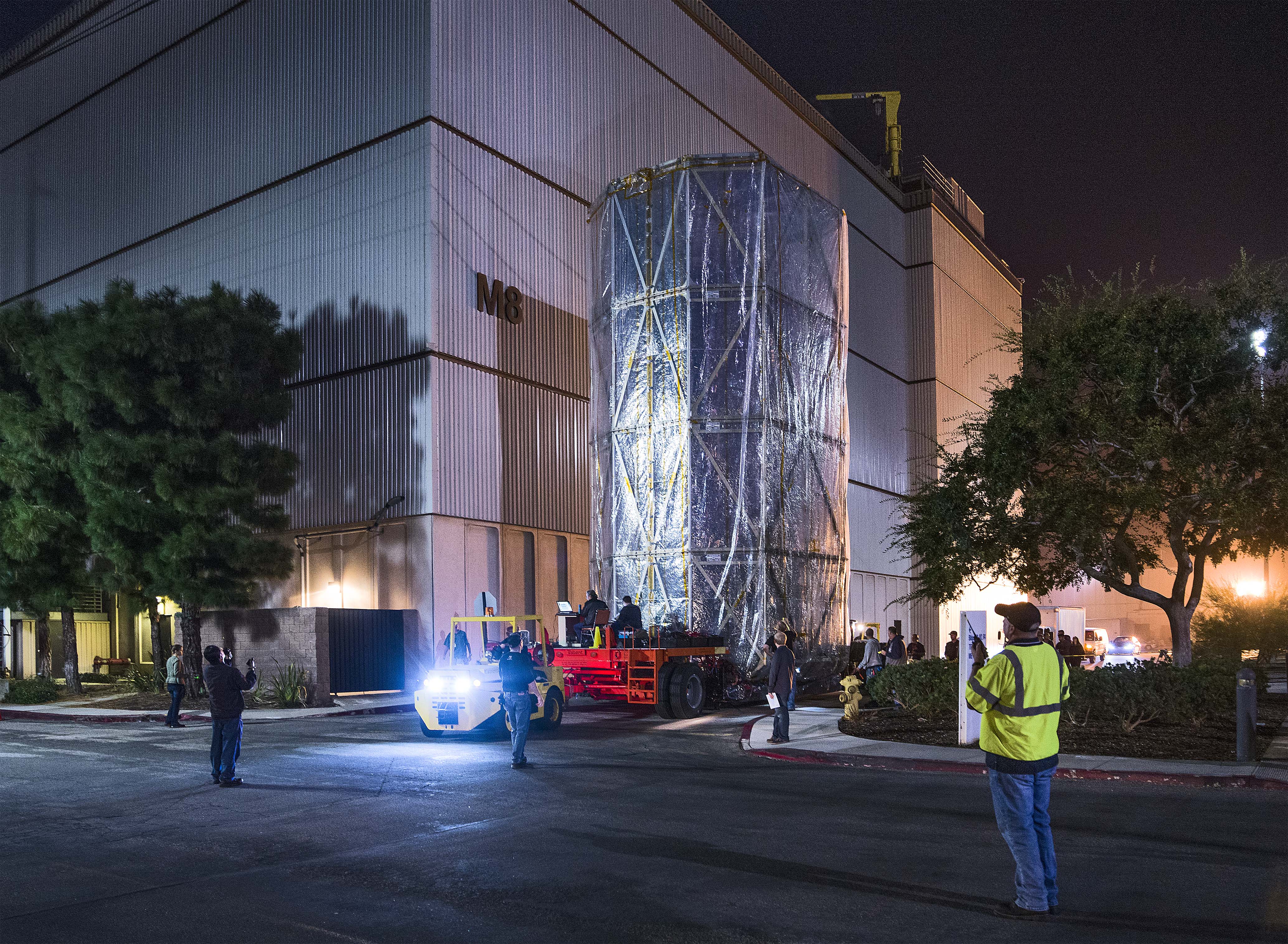 In this photo, the big silvery-looking box is the mobile cleanroom, which project personnel call the “In-Plant Transporter.” Nestled inside and visible through the translucent wrapping of the In-Plant Transporter is the Webb flight spacecraft element, which is the assembly of the spacecraft bus and sunshield. Here, the spacecraft element was being moved from the cleanroom where it was constructed to another building where it will undergo vibration and thermal-vacuum testing. Image: NASA/Chris Gunn

Once Webb launches in 2021, and is “opened” and functioning, Webb will be a present to scientists that helps them unwrap mysteries of the cosmos. It will bring countless discoveries to scientists and people around the world.

Webb will look far back in time to a period of cosmic history never seen before, seeking light from the early universe and watching how galaxies have evolved over time. It will study planets and other bodies in our solar system, and place it in context with other exoplanetary systems. Webb will study the physical and chemical properties of star systems and planet formation. It will also examine starlight filtered through exoplanetary atmospheres to learn about their chemical compositions.

Those are just some of the amazing things Webb will bring us after it’s unwrapped, launched and in orbit.