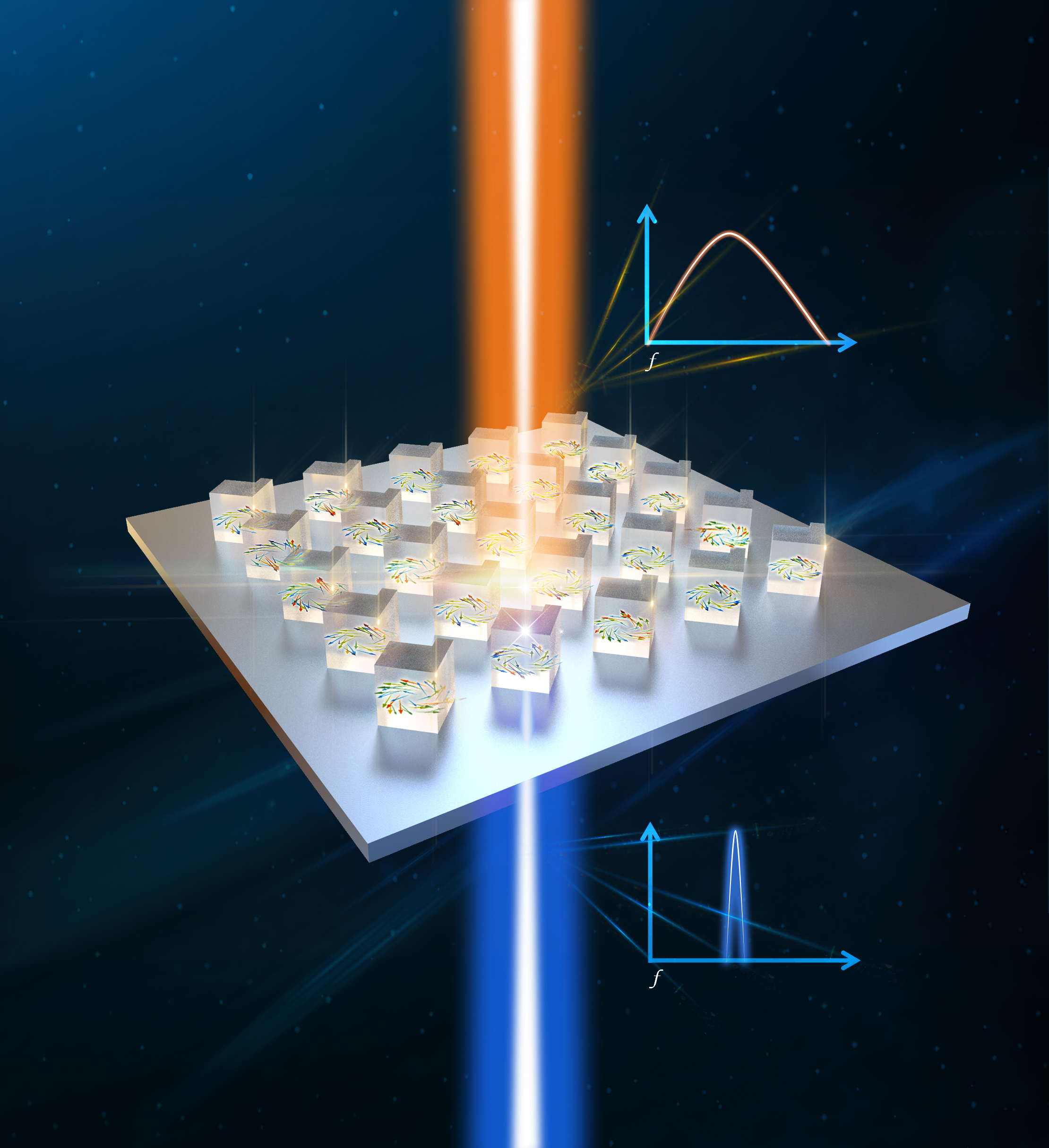 The broken-symmetry metasurface of cuboid resonators shows a spectrally broad incoming light wave. (The graph on top shows a broad spectrum.) After passing through the metasurface, the beam becomes spectrally narrow due to the sharp resonances of the broken symmetry metasurface. (The graph on the bottom shows a narrow spectrum.) The swirling pattern of arrows represents the electric field distribution of light trapped in the resonators. (Illustration courtesy of Sandia National Laboratories)

Formed by nanostructures that act as “atoms,” arranged on a substrate to alter light’s path in ways no ordinary material can achieve, these surrogate substances can manipulate an incoming light beam to enable the creation of more efficient versions of ubiquitous, valuable devices — optical filters, lasers, frequency converters and devices that steer beams, for example.

But extensive commercial use of metamaterials has been restrained by the limitations imposed by the materials comprising them. Metal-based metamaterials are “lossy” (lose energy) at shorter wavelengths and can operate effectively only at low frequencies, such as the radio frequencies used by radar, before being overwhelmed by their own absorption. Silicon doesn’t emit light and can transmit it only in a limited wavelength range because of its narrow working range (bandgap). So neither class of material can create a metamaterial that will operate in the infrared and optical ranges, where most military and commercial applications would take place.

Sandia National Laboratories researchers are helping lead the way to the use of III-V semiconductors as the building blocks of metamaterials. (III-V refers to elements in those columns in the periodic table.)  Sandia researchers have published technical papers, including three in the past year, on work featuring materials like gallium-arsenide and aluminum-arsenide, which are more efficient than metals for optical metamaterial applications, with wider bandgap ranges than silicon. The work is promising enough to have been featured on the covers of two technical journals.

“There is very little work worldwide on all-dielectric metamaterials using III-V semiconductors,” said Sandia researcher Igal Brener, who leads the Sandia work with researchers Mike Sinclair and Sheng Liu. “Our advantage is Sandia’s vast access to III-V technology, both in growth and processing, so we can move pretty fast.”

The new Sandia dielectric materials — a kind of electrical insulator — offer more than just efficiency. They lose little incoming energy and can even be fabricated in multiple layers to form complex, three-dimensional meta-atoms that reflect more light than shiny gold surfaces, usually considered the ultimate in infrared reflectivity. The III-V materials also emit photons when excited — something that silicon, which can reflect, transmit and absorb — can’t do.

Another advantage is their highly variable outputs, across the color spectrum so they might be used to extend the wavelength range of lasers or for generating “entangled photons” for quantum computing.

Sandia’s approach also is attractive for its relatively simple method of forming the artificial atoms, known as resonators, that are the guts of the metamaterial.

Created under the supervision of Liu, the meta-atoms are a few hundred nanometers in diameter and made of many actual atoms. One of Liu’s improvements was to oxidize these tiny groupings around their perimeters to create layered coatings with a low index of refraction, rather than use a more expensive, time-consuming “flip-chip” bonding process. The complexity of previous methods was an obstacle to cost- and time-efficiency. Other Sandia researchers had used a variant of his simplification previously to make lasers, but not metamaterials, he said.

The oxidized, low-index surface surrounds the high-index core “like in wintertime, you have a coat surrounding you,” Liu said. “To confine light, you need a high refractive-index contrast.” Put another way, interior light bumping into the low-indexed oxide surface is herded back by the refractive difference so it travels along the high-index core.

Liu’s Sandia colleague Gordon Keeler achieved controlled oxidation simply by putting III-V materials in a hot oven and flowing water vapor over the sample. “It will oxidize at a certain rate,” Liu says. “The more material, the longer it takes.”

The man-made meta-atoms are sculpted in place during a lithographic process that permits researchers to make any pattern they chose for the placement of the metamaterial components. “We use simulations to direct us,” Liu said. Spacing is determined to some extent by the size of the manmade atoms. 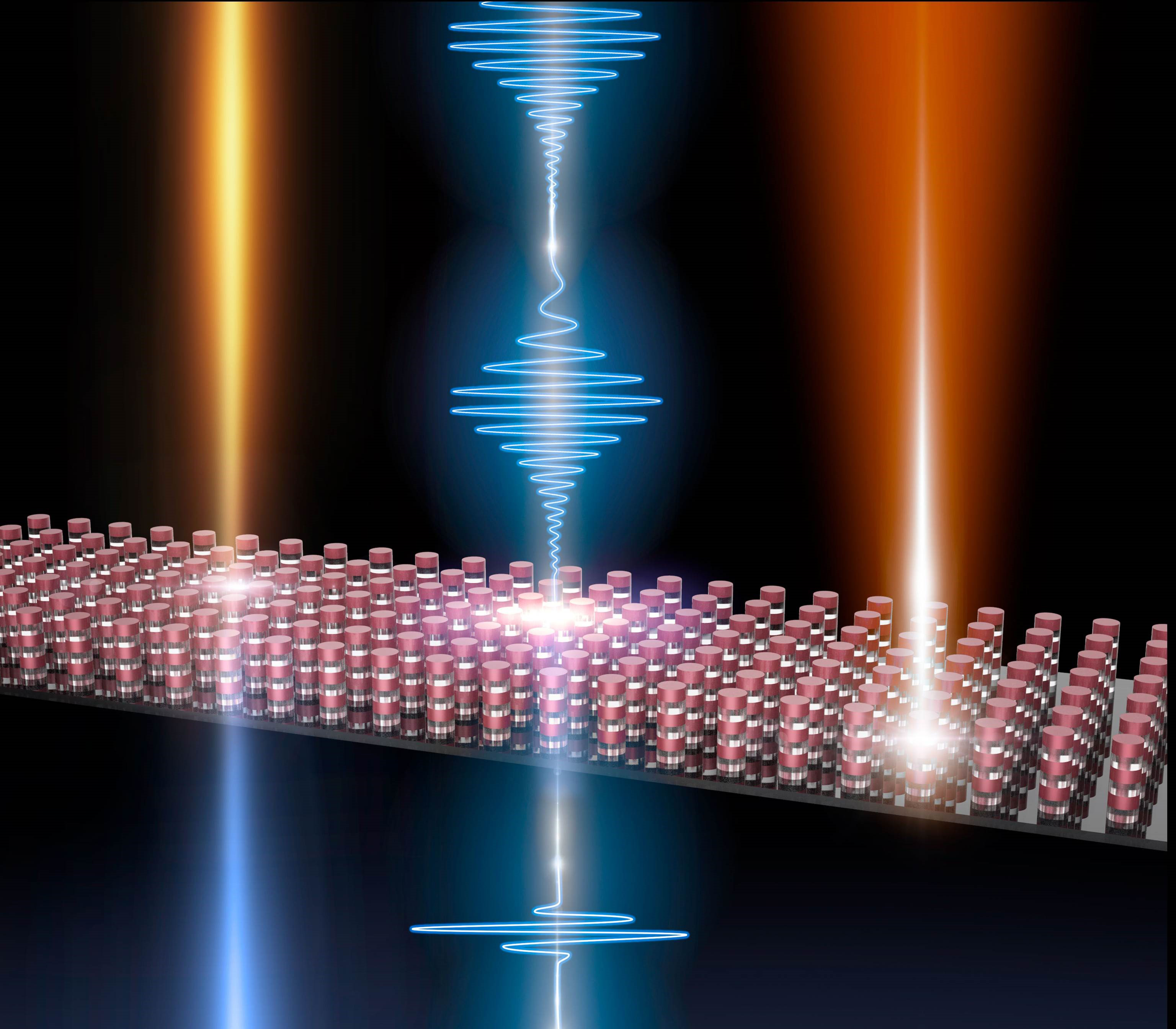 This three-resonator-thick III-V metasurface of cylindrical resonators illustrates three possible uses: The left light beam changes color as it passes through the metasurfaces, signifying that nonlinear harmonic generation is taking place that converts the light beam to a shorter wavelength. The blue trace in the middle shows a train of pulses passing through the surface. As they pass, the pulse width decreases due to pulse compression, which requires that the phase of the transmitted optical wave vary with the wavelength. The multilayer metasurfaces are able to achieve the correct phase variation — something not possible with single layer metasurfaces. The beam on the right signifies that these metasurfaces can act as efficient emitters of light. (Illustration courtesy of Sandia National Laboratories)

The researchers experimented with cylindrical and cubic nanostructures, reducing the symmetry of the latter to achieve even better properties.

“Cylinders are much easier to fabricate and typically can be used for conventional metasurfaces,” said Brener. “But broken-symmetry cubes are crucial to obtain very sharp resonances. That’s the key issue of the paper.”

The idea of intentionally reducing the symmetry of a cubic resonator nanostructure originated five or six years ago, said Sinclair, with a serendipitous design that happened to break the intentionally symmetrical shape of the meta-atoms when the team tried to mimic a particular manufacturing flaw.

“During a Laboratory Directed Research and Development [LDRD] Metamaterials Grand Challenge, when we were first fabricating cubic resonators in our effort to see if we could get beyond microwaves into infrared and optical metamaterials, we were playing with the shape of resonators to try to simulate the effect of lithography errors. In one simulation, we happened to cut a corner of the cube and all of a sudden very sharp reflection bands appeared,” Sinclair said.

Prior to that discovery, dielectric resonator metamaterials only showed broad bands that didn’t trap much energy. The researchers found the new sharp resonances allowed greater energy storage — beneficial for efficient frequency conversion, and perhaps even for light emission and lasing.

Exploration of the crimped resonator had to wait for a later project, sponsored by the Department of Energy’s Office of Science. Salvatore Campione, building on previous work by Lorena Basilio, Larry Warne and William Langston — all of Sandia — used electromagnetic simulations to unravel precisely how the cubes trap light. Sandia’s Willie Luk measured the cubes’ reflective properties. Another LDRD grant currently supports research into metamaterial lasing.

“We feel we’ve created a pretty flexible platform for a lot of different kinds of devices,” Sinclair said.

Three patents on aspects of the work have been submitted.

A large part of the work took place at the Sandia/Los Alamos Center for Integrated Nanotechnologies, a DOE Office of Science User Facility.