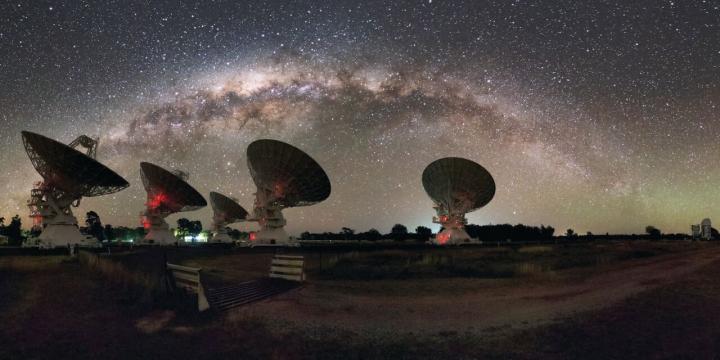 The neutron-star merger announced in October has solved one mystery – where gold comes from – but has also raised other questions, an international team reports today in the journal Nature.

The merger, dubbed GW170817, took place 130 million light-years away and was detected in August by the gravitational waves it created. Astronomers then followed it up with conventional telescopes.

The collision’s glowing wreckage generated radio waves, detected by international teams including an Australian one led by Associate Professor Tara Murphy (The University of Sydney and the ARC Centre of Excellence for All-sky Astrophysics).

Astronomers from the University of Sydney, Caltech, CSIRO and institutions around the world have monitored the merger site for months with three radio telescopes – the CSIRO Australia Telescope Compact Array, the Karl G. Jansky Very Large Array in the USA and the Giant Meter-wave Radio Telescope in India.

These bursts go off every few weeks, in any part of the sky. Each lasts less than two seconds.

“Theorists argued they were caused by colliding neutron stars,” said team member Associate Professor David Kaplan of the University of Wisconsin-Milwaukee. Neutron stars are the cores of regular stars that have exploded and contain about 1.4 times the mass of the Sun.

So the astronomers monitored the merger site with their radio telescopes for signs of such a jet.

“But we haven’t seen them,” said team member Dr Gregg Hallinan of Caltech.

“We haven’t seen a jet, so from the radio data we can’t say there’s a definite link between merging neutron star mergers and short gamma-ray bursts. The jury is still out.”

The astronomers saw the radio glow continuing to brighten more than 100 days after the cosmic crash detected in August. This suggests not an extremely fast jet but a slower, broader outflow of radio-emitting material – a ‘cocoon’ – probably matter thrown out by the explosion that’s been powered up by a jet hidden inside it.

“The cocoon scenario can explain the radio light curve of GW170817 as well as the gamma rays and X­rays. It’s the one most consistent with the data,” Associate Professor Murphy said.

But the jet might later emerge from its hiding place and rescue the model, she added.

While they continue to monitor the source the astronomers are puzzling over the ‘cocoon’ they’ve found.

“Cocoons may be a common outcome of neutron star mergers,” said Dr Keith Bannister from CSIRO.

“Now we know their tell-tale signs we can go looking for them.”

Dr Adam Deller (Swinburne University of Technology and OzGrav) predicts a bright future for the new field of gravitational-wave astronomy.

“By tying the information we gather across the electromagnetic spectrum to that gained from the gravitational wave detection, we can learn an enormous amount of detail about events like this one,” he said.