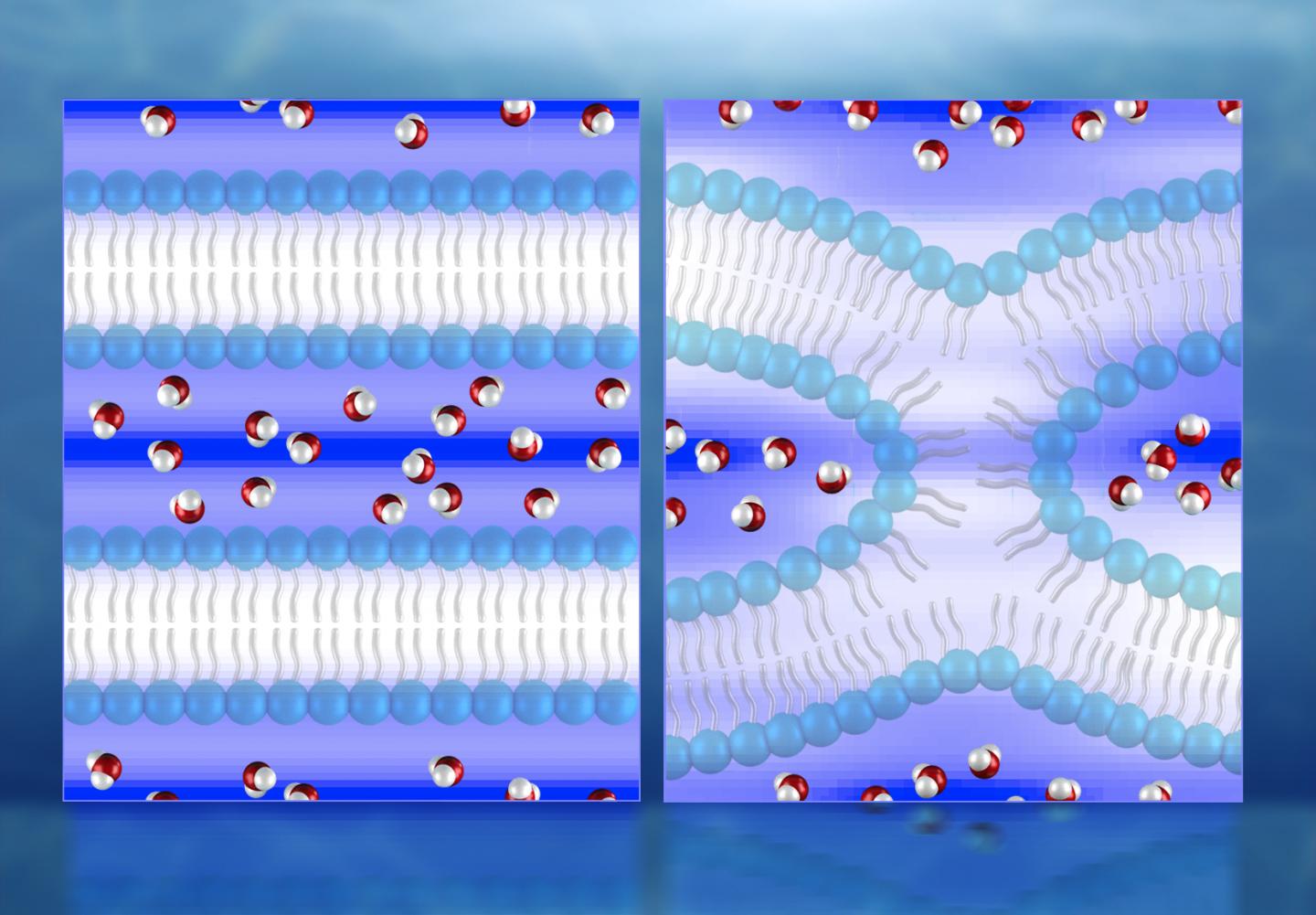 Illustration of neutron diffraction data showing water distribution (red and white molecules) near lipid bilayers prior to fusion (left) and during fusion. Mapping the water molecules is key to understanding the process of cell membrane fusion, which could help facilitate the development of treatments for diseases associated with cell fusion. Credit: ORNL/Jill Hemman

New 3D maps of water distribution during cellular membrane fusion are accelerating scientific understanding of cell development, which could lead to new treatments for diseases associated with cell fusion. Using neutron diffraction at the Department of Energy’s Oak Ridge National Laboratory, researchers have made the first direct observations of water in lipid bilayers used to model cell membrane fusion.

The research, published in Journal of Physical Chemistry Letters, could provide new insights into diseases in which normal cell fusion is disrupted, such as Albers-Schönberg disease (osteopetrosis), help facilitate the development of fusion-based cell therapies for degenerative diseases, and lead to treatments that prevent cell-to-cell fusion between cancer cells and non-cancer cells.

When two cells combine during fertilization, or a membrane-bound vesicle fuses during viral entry, neuron signaling, placental development and many other physiological functions, the semi-permeable membrane bilayers between the fusing partners must be merged to exchange their internal contents. As the two membranes approach each other, hydration forces increase exponentially, which requires a significant amount of energy for the membranes to overcome. Mapping the distribution of water molecules is key to understanding the fusion process.

“We used neutrons to probe our samples, because water typically can’t be seen by x-rays, and because other imaging techniques can’t accurately capture the extremely rapid and dynamic process of cellular fusion,” said Durgesh K. Rai, co-author and now a post-doctoral associate at the Cornell High Energy Synchrotron Source at Cornell University. “Additionally, the cold, lower-energy neutrons at EQ-SANS and Bio-SANS won’t cause radiation damage or introduce radicals that can interfere with lipid chemistry, as x-rays can do.”

The researchers’ water density map indicates the water dissociates from the lipid surfaces in the initial lamellar, or layered, phase. In the intermediate fusion phase, known as hemifusion, the water is significantly reduced and squeezed into pockets around a stalk–a highly curved lipid “bridge” connecting two membranes before fusion fully occurs.

“For the neutron scattering experiments, we replaced some of the water’s hydrogen atoms with deuterium atoms, which helped the neutrons observe the water molecules during membrane fusion,” said Shuo Qian, the study’s corresponding author and a neutron scattering scientist at ORNL. “The information we obtained could help in future studies of membrane-acting drugs, membrane-associated proteins, and peptides in a membrane complex.”