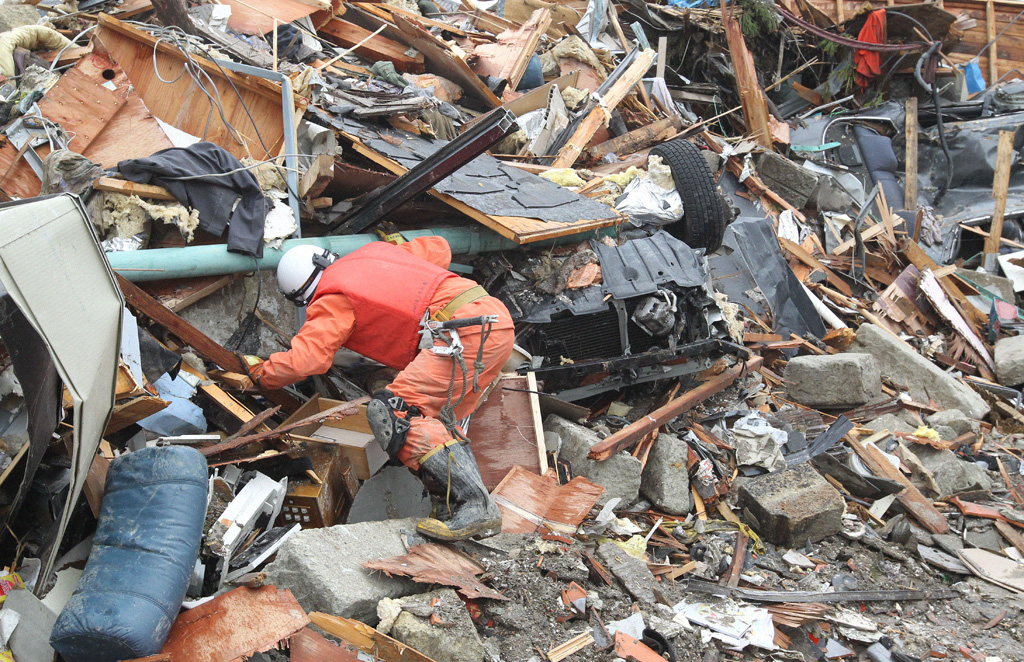 The Tohoku earthquake and tsunami that struck the coast of Japan on March 11, 2011 killed more than 15,000 people. Researchers at The University of Texas at Austin are leading efforts to develop computer models that can improve our understanding of the forces driving such devastating earthquakes. (Credit: RIA Novosti archive, image #882887/Iliya Pitalev/CC-BY-SA 3.0, https://creativecommons.org/licenses/by-sa/3.0/legalcode)

The research could help enhance the understanding of forces driving megathrust earthquakes—the world’s most powerful type of earthquake—and improve earthquake hazard assessment. The study was published in December in Earth and Planetary Science Letters (EPSL).

Lead author Thorsten Becker, a professor at the UT Jackson School of Geosciences and researcher at the University of Texas Institute for Geophysics, said that this was the first comprehensive study showing changes in the barely perceptible tremor activity before the Tohoku megathrust earthquake.

“The part of the crust that is close to the place that eventually ruptured changes stress state a couple of years before the event,” said Becker. “By demonstrating this, our work complements studies of crustal deformation and our understanding of the forces driving earthquakes.”

While the location of the tremors raises questions about their potential linkage to the quake, Becker said that it’s unknown if the two events relate at the moment. However, the seismic signature of the tremors is helping refine a computer model that could help untangle the connection. This new modeling technique allows scientists to create a four-dimensional image of the earth’s crust showing how forces pushing at the fault change over time.

Once the seismic data was inputted, the model matched observations of how the plate deformed in the years before and after the earthquake. This allowed the scientists to make inferences about the kind of forces taking place at the plate boundary, the point where one plate dives into the Earth’s hot, viscous mantle. In this semi-molten layer, solid rocks ooze and behave in unexpected ways, so understanding the dynamics of the layer could help identify the connection between pressure along a fault before and after a major earthquake.

The new research is significant because the model was originally developed using a different dataset: geodetic information about the shape of the Earth’s surface. By gaining similar results using different data sets—seismic waves and changes in the planet’s shape—scientists can be much more confident about the accuracy of earthquake models.

Becker believes that with the right research and support, advanced computer models can be used to study the physics of earthquakes and perhaps contribute to improved forecasts.

Currently, scientists can at best offer hazard maps showing known earthquake zones and a vague probability of an earthquake in the coming decades. Knowing more about when and where such a quake might strike, even within a few years, would represent a significant improvement on current earthquake forecasting and perhaps allow authorities and industry adequate time to prepare for such an event.

To this end, the authors hope their study will contribute to global efforts to improve earthquake hazard assessment such as the Modeling Collaboratory for Subduction RCN, a new UT-led research collaboration network funded by the National Science Foundation (NSF).

The study was supported by the NSF and the Japanese Ministry of Education, Culture, Sports, Science and Technology.