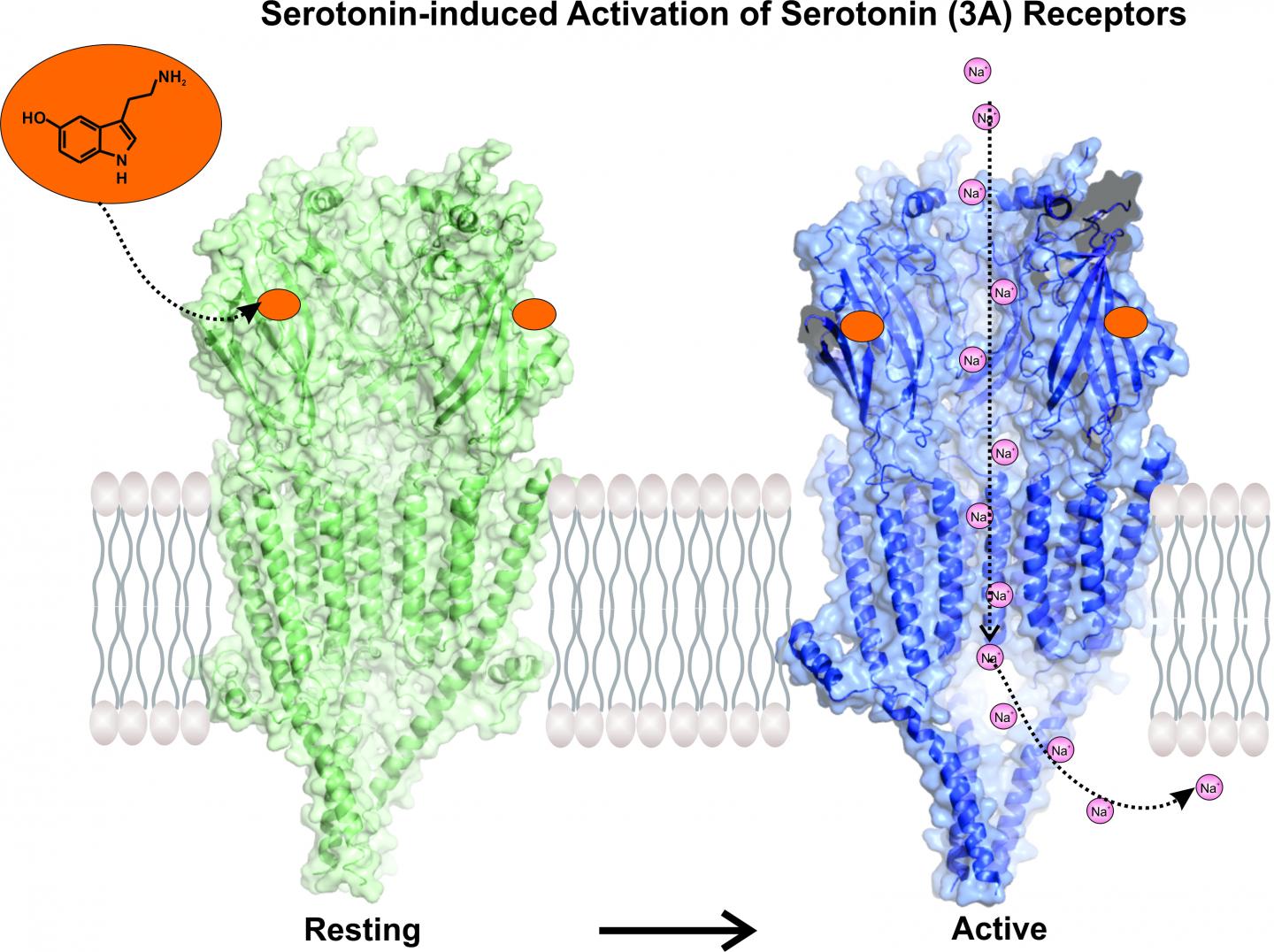 Serotonin (3A) receptors are common drug targets in the treatment of pain, gastrointestinal dysfunctions, and mood disorders yet little is known about their three-dimensional structure. Details about serotonin receptor structures could provide important clues to designing better drugs with less side effects. Now, a team of researchers from Case Western Reserve University School of Medicine have used high-powered microscopes to view serotonin activating its receptor for the first time. Images published in Nature reveal molecular details about the receptor that could improve drug design to treat a multitude of diseases.

Serotonin receptors sit in cell membranes throughout the body, including the brain, stomach, and the associated nervous system. Drugs that inhibit serotonin receptors help control post-operative nausea, support cancer therapies, and are used to treat gastrointestinal conditions like irritable bowel syndrome. These inhibitors also find application as anti-depressants, and promote attention and memory.

Broad application comes with side effects–in part due to suboptimal drug-receptor interactions, says study lead Sudha Chakrapani, PhD, associate professor of physiology and biophysics at Case Western Reserve University School of Medicine. “Successful design of safer therapeutics has been slowed because there is a limited understanding of the structure of the serotonin receptor itself, and what happens after serotonin binds to it. Our work is the first to describe how serotonin activates the full-length serotonin receptor at a level of detail to nearly the individual atom.”

Using Nobel Prize-winning microscope technology, Chakrapani’s team studied serotonin as it interacted with its receptor. Their images show serotonin attaching to the receptor and twisting open the channel. Open channels allow molecules to travel from outside the cell to inside. The researchers used simulations to watch as sodium molecules traveled through newly opened channels. The new study highlights distinct conformations of the serotonin receptor that would make a cell more or less permeable to certain molecules–a key insight for drug developers. It also shows which portions of the receptor are most critical for proper channel function.

The entire serotonin-receptor occurs in a space about a few billionths of a meter across. Microscopes have only recently evolved to capture such tiny molecules. Cutting-edge technology in the new study–cryo-electron microscopy–earned a 2017 Nobel Prize in chemistry. It uses high-powered microscopes to take snapshots of proteins in action, and compiles them into three-dimensional structural models. In the past year it has already helped Case Western Reserve researchers view structures for proteins central to kidney stones and other ailments. Chakrapani used “cryo-EM” last year to view the serotonin receptor alone, laying the foundation for the present study.