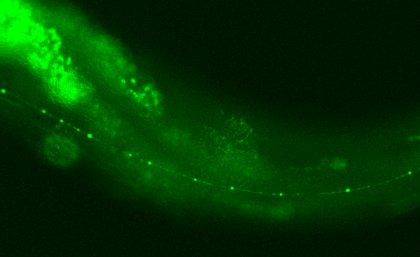 A discovery in a transparent roundworm has brought scientists one step closer to understanding why nerves degenerate.

University of Queensland researchers have identified a key molecule that protects the axons of nerve cells from degenerating.

“Using roundworms we identified the lin-14 molecule as being crucial to protecting the axon,” Dr Hilliard said.

“When this molecule is lacking, the axon spontaneously degenerates.”

Nerve axons are damaged in neurodegenerative conditions including Alzheimer’s disease and Parkinson’s disease.

The researchers studied roundworm Caenorhabditis elegans (C. elegans), a small organism about one millimetre long with only 302 neurons.

C. elegans was the first multicellular organism to have its genome sequenced.

Researcher Fiona Ritchie said it enabled researchers to study neurons on a molecular and genetic level.

“What was surprising is that the lin-14 molecule is not necessary only within the axon, but also needs to be present in the surrounding tissue,” she said.

“Our research highlights that complex connections between axons and their surrounding environment are critical for the survival of the axons later in life.”

“The next step is to better understand the interactions between axons and their surrounding tissue, as well as to look for similar molecules that mediate the same degenerative process in humans.”