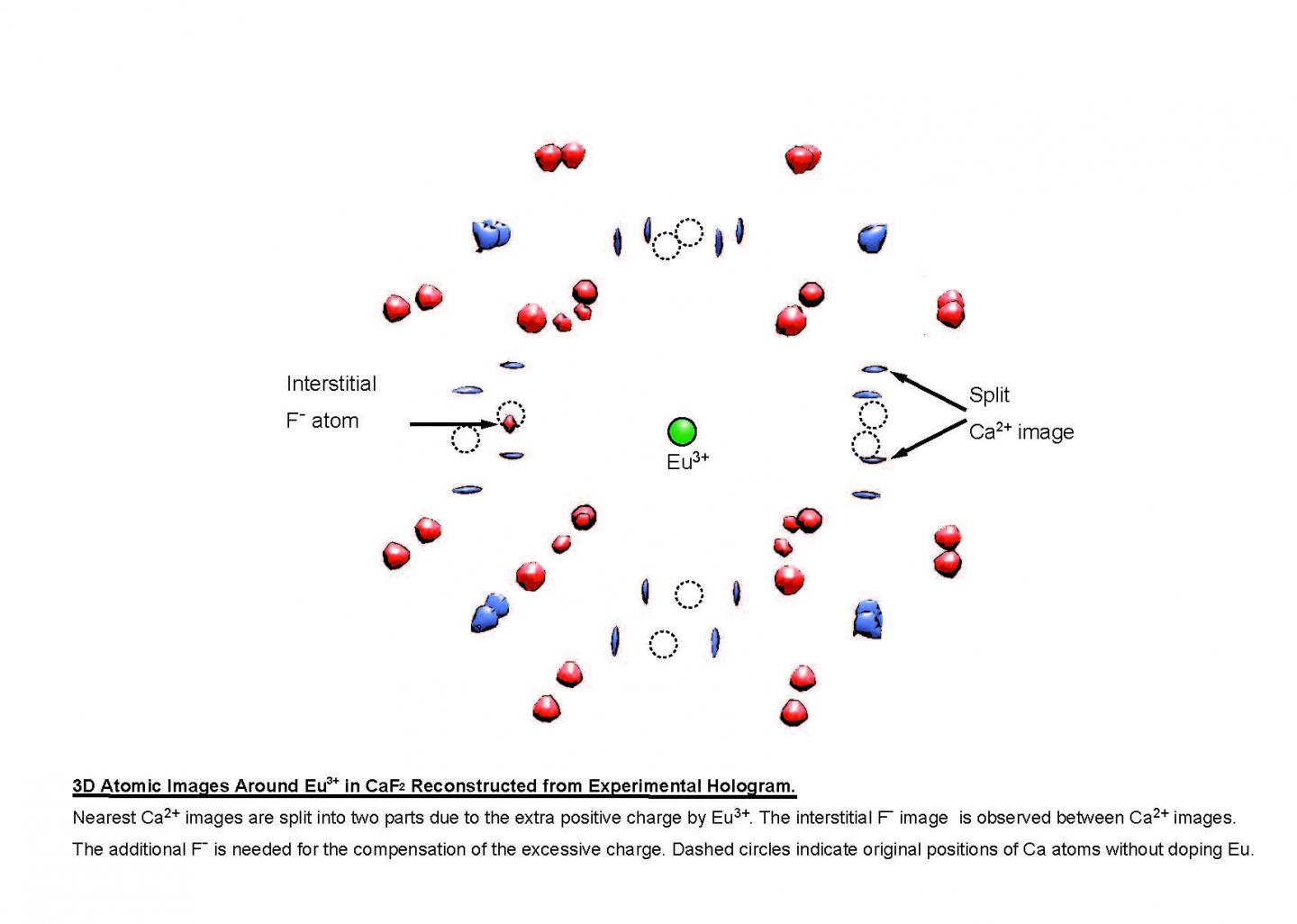 Nearest Ca2+ images are split into two parts due to the extra positive charge by Eu3+. The interstitial F- image is observed between Ca2+ images. The additional F- is needed for the compensation of the excessive charge. Dashed circles indicate original positions of Ca atoms without doping Eu.

People usually associate holograms with futuristic 3D display technologies, but in reality, holographic technologies are now being used to help study materials at the atomic level. X-rays, a high energy form of light, are often used to study atomic structure. However, X-rays are only sensitive to the number of electrons associated with an atom. This limits the use of X-rays for studying materials made up of lighter elements. Neutron measurements can often fill in the gaps in structures when X-ray measurements fail, but neutron beams are harder to make and have lower intensities than X-ray beams, which limits their versatility.

“We knew that neutron holography might be able to tell us more about the structure of a europium-doped calcium fluoride crystal,” says lead author Kouichi Hayashi. “Europium ions add extra positive charge to the crystal structure, and our neutron holograms showed how fluorine atoms arranged in the lattice to balance this excess charge. These kinds of structural problems are often encountered by materials scientists developing new electronic materials, and our method offers an exciting new tool for these researchers.”

The new holographic method works by firing neutrons with controlled speed at a sample, which in this case is the europium-doped calcium fluoride crystals. Neutrons are normally thought of as particles, but also have wave-like properties similar to light, depending on their speed. When the neutrons hit europium atoms, gamma rays are produced in a pattern controlled by the local structure. The gamma ray patterns, or holograms, measured from neutrons travelling at different speeds are combined to produce a three-dimensional representation of the europium atoms in the crystal.

Hayashi says, “Neutron sources are less intense than X-ray sources, but it is essential that we work around this issue to develop more effective methods for exploring structures with light elements. Our work here represents a step towards a full toolbox of commentary X-ray and neutron techniques for materials research.”