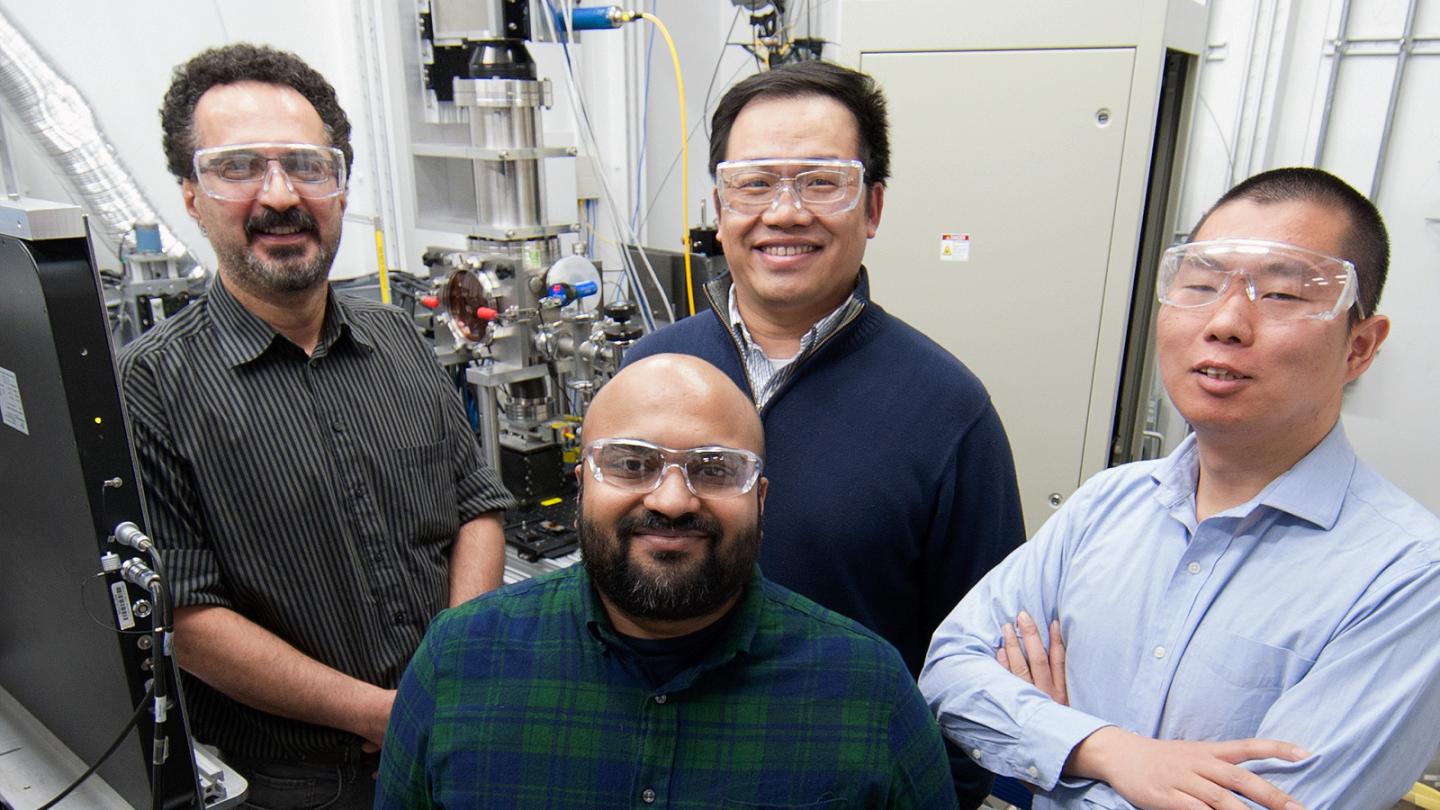 Argonne scientists who were co-authors on a recent paper about the 3D manufacturing process pose inside a hutch at Argonne’s Advanced Photon Source, in front of a specialty system that can simulate the Laser Powder Bed Fusion Process in a commercial 3D printer. Pictured, clockwise from top left, are Kamel Fezzaa, an APS beamline scientist; Tao Sun, an APS beamline scientist; Cang Zhao, an APS postdoc, and Niranjan Parab, an APS postdoc. Credit: Argonne National Laboratory

Additive manufacturing’s promise to revolutionize industry is constrained by a widespread problem: tiny gas pockets in the final product, which can lead to cracks and other failures.

New research published today in Science, led by teams from Carnegie Mellon University and the U.S. Department of Energy’s (DOE) Argonne National Laboratory, has identified how and when these gas pockets form, as well as a methodology to predict their formation — information that could dramatically improve the 3D printing process.

“The research in this paper will translate into better quality and better control in working with the machines,” said Anthony Rollett, a Professor of Materials Science and Engineering at Carnegie Mellon University and an author on the paper. “For additive manufacturing to really take off for the majority of companies, we need to improve the consistency of the finished products. This research is a major step in that direction.”

The scientists used the extremely bright, high-energy X-rays at Argonne’s Advanced Photon Source (APS), a DOE Office of Science User Facility, to take super-fast video and images of a process called Laser Power Bed Fusion (LPBF), in which lasers are used to melt and fuse material powder together.

The lasers, which scan over each layer of powder to fuse metal where it is needed, literally create the finished product from the ground up. Defects can form when pockets of gas become trapped into these layers, causing imperfections that could lead to cracks or other breakdowns in the final product.

Until now, manufacturers and researchers did not know much about how the laser drills into the metal, producing cavities called “vapor depressions,” but they assumed that the type of metal powder or strength of laser were to blame. As a result, manufacturers have been using a trial and error approach with different types of metals and lasers to seek to reduce the defects.

“We’re drawing back the veil and revealing what’s really going on,” Rollett said. “Most people think you shine a laser light on the surface of a metal powder, the light is absorbed by the material, and it melts the metal into a melt pool. In actuality, you’re really drilling a hole into the metal.”

By using highly specialized equipment at Argonne’s APS, one of the most powerful synchrotron facilities in the world, researchers watched what happens as the laser moves across the metal powder bed to create each layer of the product.

Under perfect conditions, the melt pool shape is shallow and semicircular, called the “conduction mode.” But during the actual printing process, the high-power laser, often moving at a low speed, can change the melt pool shape to something like a keyhole in a warded lock: round and large on top, with a narrow spike at bottom. Such “keyhole mode” melting can potentially lead to defects in the final product.

“Based on this research, we now know that the keyhole phenomenon is more important, in many ways, than the powder being used in additive manufacturing,” said Ross Cunningham, a recent graduate from Carnegie Mellon University and one of the co-first authors of this paper. “Our research shows that you can predict the factors that lead to a keyhole — which means you can also isolate those factors for better results.”

The research shows that keyholes form when a certain laser power density is reached that is sufficient to boil the metal. This, in turn, reveals the critical importance of the laser focus in the additive manufacturing process, an element that has received scant attention so far, according to the research team.

“The keyhole phenomenon was able to be viewed for the first time with such details because of the specialized capability developed at Argonne,” said Tao Sun, an Argonne physicist and an author on the paper. “Of course, the intense high-energy X-ray beam at the APS is the key.”

In 2016, the Argonne team, together with their research partners, captured the first-ever X-ray video of laser additive manufacturing at micrometer and microsecond scales. That study increased interest in the techniques and the kinds of problems that could be researched at Argonne’s APS.

“We are really studying the most basic science problem, which is what happens to metal when you heat it up with a high-power laser,” said Cang Zhao, an Argonne postdoc and the other co-first author of the paper. “At the same time, because of our unique experimental capability, we are able to work with our collaborators on experiments that are really valuable to manufacturers.”

The research team believes this research could motivate makers of additive manufacturing machines to offer more flexibility when controlling the machines and that the improved use of the machines could lead to a significant improvement in the final product. In addition, if these insights are acted upon, the process for 3D printing could get faster.

“It’s important because 3D printing in general is rather slow,” Rollett said. “It takes hours to print a part that is a few inches high. That’s OK if you can afford to pay for the technique, but we need to do better.”