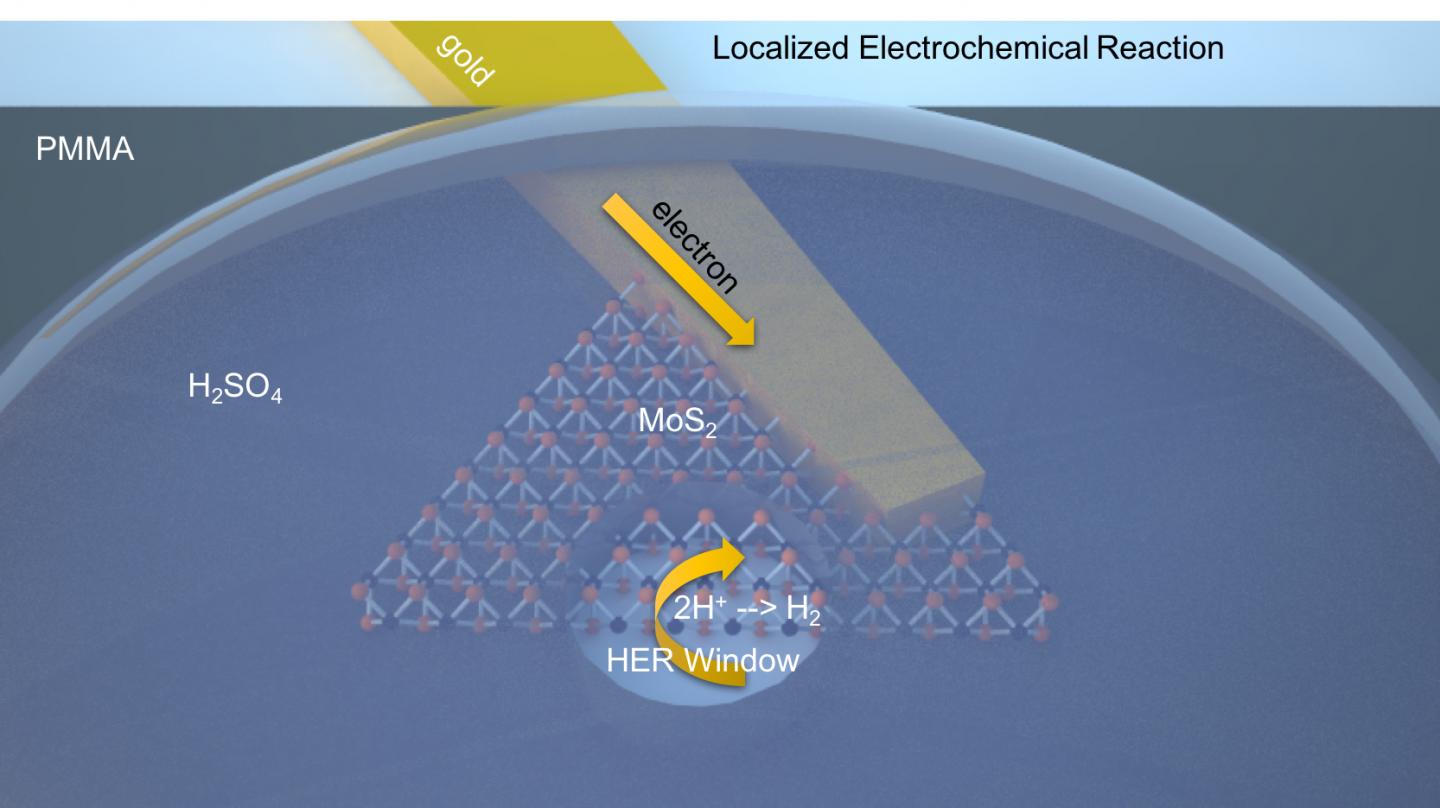 Rice University researchers have taken a deep look into atom-thick catalysts that produce hydrogen to see precisely where it’s coming from. Their findings could accelerate the development of 2-D materials for energy applications, such as fuel cells.

The Rice lab of materials scientist Jun Lou, with colleagues at Los Alamos National Laboratory, developed a technique to probe through tiny “windows” created by an electron beam and measure the catalytic activity of molybdenum disulfide, a two-dimensional material that shows promise for applications that use electrocatalysis to extract hydrogen from water.

Initial tests on two variations of the material proved that most production is coming from the thin sheets’ edges. The researchers reported their results this month in Advanced Materials.

Researchers already knew the edges of 2-D materials are where the catalytic action is, so any information that helps maximize it is valuable, Lou said.

“We’re using this new technology to identify the active sites that have been long-predicted by theory,” he said. “There was some indirect proof that the edge sites are always more active than the basal planes, but now we have direct proof.”

“The majority of the material is on the surface, and you want that to be an active catalyst, rather than just the edge,” Lou said. “If the reaction only happens at the edge, you lose the benefit of having all the surface area provided by a 2-D geometry.”

The lab tested molybdenum disulfide flakes with different crystalline structures known as “1T prime” (or distorted octahedral) and 2H (trigonal prismatic). “They’re basically the same material with the same chemical composition, but the positions of their atoms are different,” Lou said. “1T prime is metallic and 2H is a semiconductor.”

He said researchers have so far experimentally proved the more conductive 1T prime was catalytic along its entire surface area, but the Rice study proved that to be not entirely accurate. “Our results showed the 1T prime edge is always more active than the basal plane. That was a new discovery,” he said.

After making the flakes via chemical vapor deposition, Zhang used an electron beam evaporation method to deposit electrodes to individual flakes. He then added an insulating layer of poly(methyl methacrylate), a transparent thermoplastic, and burned a pattern of “windows” in the inert material through e-beam lithography. That allowed the researchers to probe both the edges and basal planes of the 2-D material, or just specific edges, at submicron resolution.

The 16 probes on the inch-square chip built at Los Alamos pulse energy into the flakes through the windows. When hydrogen is produced, it escapes as a gas but steals an electron from the material. That creates a current that can be measured through the electrodes. Probes can be addressed individually or all at once, allowing researchers to get data for multiple sites on a single flake or from multiple flakes.

Rapid testing will help researchers alter their microscopic materials more efficiently to maximize the basal planes’ catalytic activity. “Now there’s incentive to utilize the strength of this material — its surface area — as a catalyst,” Lou said. “This is going to be a very good screening technique to accelerate the development of 2-D materials.”