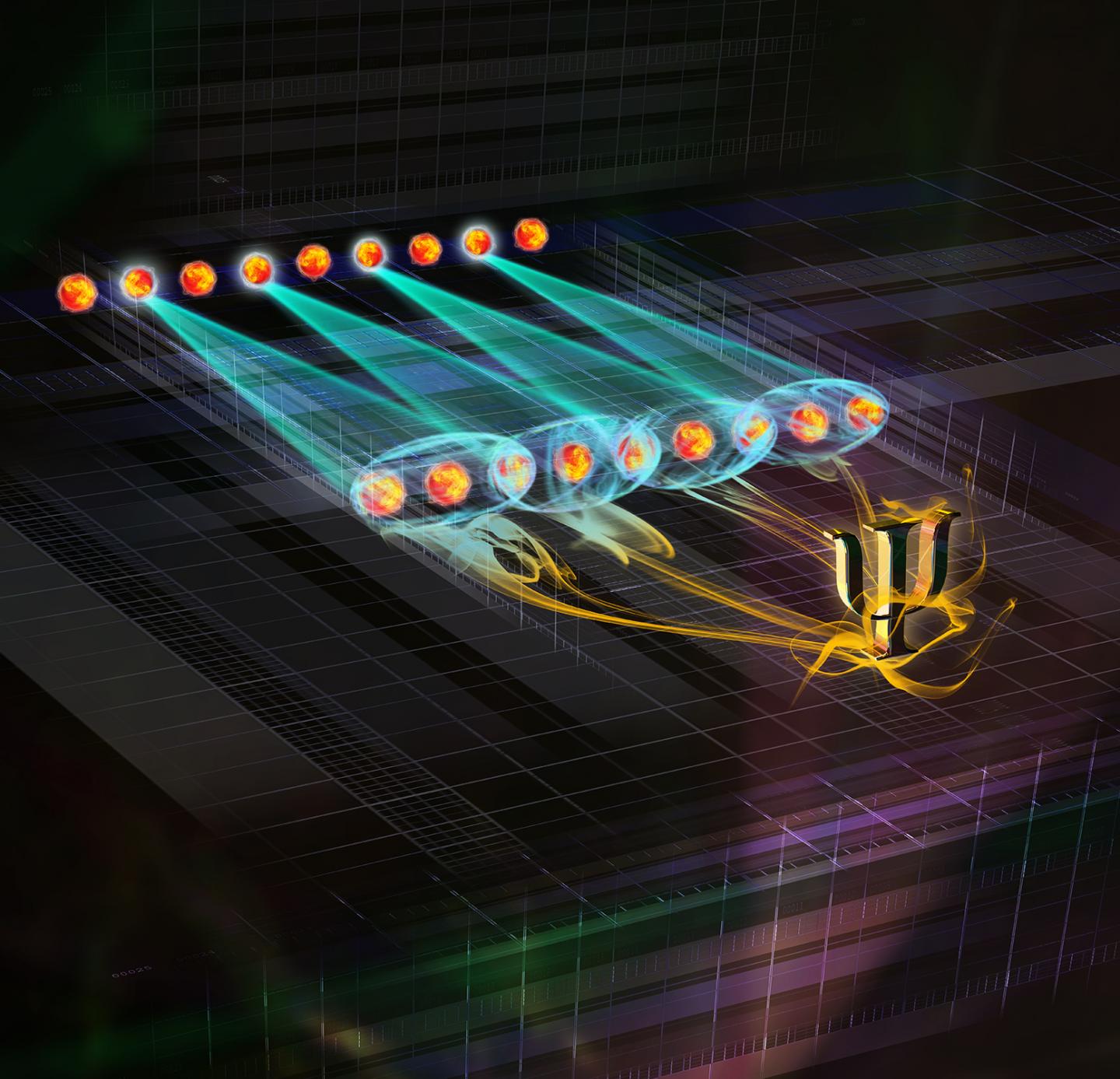 The image visualizes a string of trapped ions that start interacting with each other. A complex many-particle quantum state (psi)emerges as a result of these interactions. The state can be reconstructed by carrying out measurements on groups of neighboring ions.

Many phenomena in the quantum world cannot be investigated directly in the laboratory, and even supercomputers fail when trying to simulate them. However, scientists are now able to control various quantum systems in the laboratory very precisely and these systems can be used to simulate other quantum systems. Such Quantum Simulators are therefore considered to be one of the first concrete applications of the second quantum revolution.

However, the characterization of large quantum states, which is necessary to guide the development of large-scale quantum simulators, proves to be difficult. The current gold standard for quantum-state characterization in the laboratory – quantum-state tomography – is only suitable for small quantum systems composed of a handful of quantum particles. Researchers from the Institute of Experimental Physics at the University of Innsbruck and the Institute for Quantum Optics and Quantum Information of the Austrian Academy of Sciences have now established a new method in the laboratory that can be used to efficiently characterize large quantum states.

In ion traps, charged atoms (ions) are cooled to temperatures close to absolute zero and manipulated with the aid of lasers. Such systems represent a promising approach to performing quantum simulations that can go beyond the capabilities of modern supercomputers. The Innsbruck quantum physicists are amongst the world leaders in this field and can currently entangle 20 or more ions in their traps. In order to fully characterize such large quantum systems, they need new methods. For this, theorists around Martin Plenio from the University of Ulm, Germany, came to their aid. In 2010, the Plenio team proposed a new method for the characterization of complex quantum states called matrix-product-state tomography. Using this method, the state of a group of entangled quantum particles can be estimated precisely without the effort increasing dramatically as the number of particles in the group is increased. In collaboration with the teams around Martin Plenio from Ulm and Andrew Daley from the University of Strathclyde in Scotland, the Innsbruck experimental physicists around Christian Roos, Ben Lanyon and Christine Maier have now implemented this procedure in the laboratory.

As a test case, the physicists built a quantum simulator with up to 14 quantum bits (atoms), that was first prepared in a simple initial state without quantum correlations. Next, the researchers entangled the atoms with laser light and observed the dynamical propagation of entanglement in the system. “With the new method, we can determine the quantum state of the whole system by measuring only a small fraction of the system properties,” says START prize winner Ben Lanyon. The theorists around Martin Plenio took the characterization of the global quantum state from the measured data: “The method is based on the fact that we can theoretically describe locally-distributed entanglement well and can now also measure it in the laboratory.”

When the work group of Rainer Blatt realized the first quantum byte in 2005, more than 6,000 measurements were required for the characterization of the quantum state, taken over a period of ten hours. The new method requires only 27 measurements to characterise the same size system, taken over around 10 minutes. “We were able to show that this method can be used to identify large and complex quantum states efficiently,” says Christine Maier, a team member from Innsbruck. Now the scientists want to further develop the algorithms so that they can also be used flexibly by other research groups.

The new method allows the complete characterization of systems containing large numbers of correlated quantum particles and thus provides a comparison option for quantum simulations. “We can use the new technique to calibrate quantum simulators, by comparing the states that we find in the lab with the ones expected from analytical calculations,” explains Christian Roos. “Then we know if the simulator does what we want.” The new method offers physicians a tool for many applications and could become a new standard for quantum simulations.