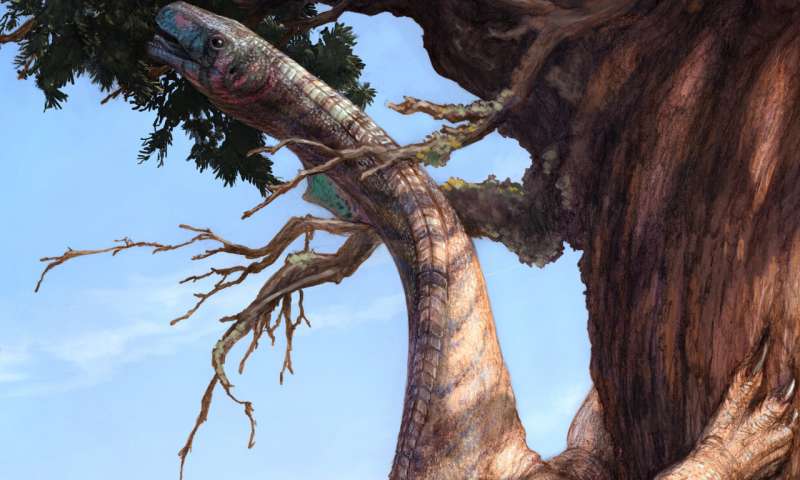 Artist’s interpretation of Sarahsaurus aurifontanalis. The dinosaur was about the size of a car and had powerful forelimbs with large claws. It lived during the Early Jurassic in North America. Credit: Brian Engh

By the time non-avian dinosaurs went extinct, plant-eating sauropods like the Brontosaurus had grown to gargantuan proportions. Weighing in as much as 100 tons, the long-neck behemoths are the largest land animals to ever walk the earth.

How they grew so large from ancestors that were small enough to be found in a modern-day petting zoo has remained a mystery. A new, in-depth anatomical description of the best preserved specimens of a car-sized sauropod relative from North America could help paleontologists with unraveling the mystery.

Adam Marsh, a paleontologist at Petrified Forest National Park, led the description of the dinosaur while earning his master’s degree from The University of Texas at Austin Jackson School of Geosciences. The findings were published on Oct. 10 in the journal PLOS ONE. Marsh co-authored the paper with his advisor, Jackson School Professor Timothy Rowe.

The dinosaur—called Sarahsaurus aurifontanalis— lived about 185 million years ago during the Early Jurassic. It could hold important clues about sauropods’ size because it belonged to the dinosaur grouping that preceded them. Its evolutionary placement combined with the exquisite preservation of the specimens is giving researchers a detailed look into its anatomy and how it relates to its larger cousins.

“Sarahsaurus preserves in its anatomy the anatomical changes that were happening in the Late Triassic and Early Jurassic that were occurring in the evolutionary lineage,” Marsh said. “It can help tell us how getting big happens.”

The description is based on two skeletons discovered in Arizona by Rowe in 1997. The bones belong to the Navajo Nation, which owns the land where the fossils were discovered, and are curated by the Jackson School Museum of Earth History Vertebrate Paleontology Collections. The bones are slightly crushed, and in some cases still linked together into body parts such as the hand and tail. The only major missing part is the skull.

“The specimens are well preserved in three dimensions and remarkably complete, which is very rare in the fossil record,” said collections Director Matthew Brown. “Such complete specimens help paleontologists better understand the fragmentary and incomplete fossils remains we typically find.”

Marsh describes Sarahsaurus as a “ground sloth-like” dinosaur. It stood upright, walked on its hind-legs and had powerful forelimbs with a large, curved claw capping the first finger of each hand. It had a lot in common with the earliest sauropod ancestors—like walking on two legs—but it was also starting to show features that would foreshadow how its massive relatives would evolve—such as an increase in body size and a lengthening of the neck vertebrae.

“It’s starting to gain the characters of getting large compared to the earliest members of the group,” Marsh said.

Size and neck-length are features that sauropods would take to extremes as they evolved. By studying these traits and others in Sarahsaurus, and seeing how they compare to those of other dinosaurs, scientists can help reveal how these changes occurred across evolutionary history and how different dinosaurs relate to one another.

For example, the anatomical review helped clarify the relationship between Sarahsaurus and two other sauropod relatives that lived in North America during the Early Jurassic. The researchers found that the three don’t have a common North American ancestor—instead they evolved from dinosaur lineages that came to North America independently.

Marsh is currently working on another study that could shed more light on how sauropods evolved. Led by Sterling Nesbitt, an assistant professor at Virginia Tech and research associate at the Jackson School’s vertebrate collections, the project involves tracking anatomical differences in dinosaur limb bones to determine which features relate to evolution and which relate to the age of an animal. Marsh said that the two Sarahsaurus skeletons examined for this paper are a great addition to the project.

“We’ve got two individuals from basically the same hole in the ground with different bumps and grooves on their femora,” Marsh said. “It lends itself really well to this comprehensive anatomical description and it’s going to be really important for comparisons of early dinosaur anatomy.”