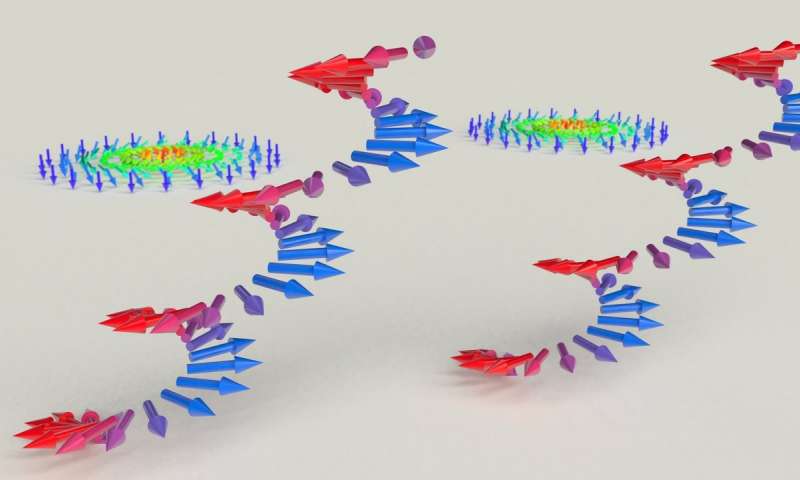 Magnetic skyrmions are magnetic swirls that may lead to new solutions combining low-energy consumption with high-speed computational power and high-density data storage, revolutionizing information technology. A team from Delft University of Technology, in collaboration with the University of Groningen and Hiroshima University, has discovered a new, unexpected magnetic state, which is related to these skyrmions. The findings open up new ways to create and manipulate complex magnetic structures in view of future IT applications.

A magnetic skyrmion is a quasiparticle, a magnetic swirl, which, once created, is highly stable and cannot collapse. Moreover, skyrmions are tiny and can travel through materials nearly unimpeded, much like tsunamis travel through the oceans. These unique properties make skyrmions promising building blocks for green IT applications, such as high density hard drives without any moving parts. Since their initial discovery almost 10 years ago, skyrmions have been found to be ubiquitous. In recent years, physicists have discovered new types of skyrmions, as well as new material classes that host skyrmions. However, all these systems show the same generic behaviour, which was therefore assumed to be universal.

Now, however, an international collaboration of experimental and theoretical physicists led by Delft University of Technology has discovered an entirely new state that does not fit into the universal scheme and may be used to manipulate skyrmions. “This state appears under the influence of high magnetic fields and low temperatures,” said Katia Pappas of Delft University of Technology. “Nobody, including us, had expected to find it there.”

The researchers obtained experimental confirmation for this new phase through the use of neutron scattering, magnetization and AC magnetic susceptibility measurements. Small-angle neutron scattering, first at the Laboratoire Léon Brillouin, France, and finally at Oak Ridge National Laboratory, in the USA, provided the crucial evidence. It revealed a change in the microscopic structure when magnetic spirals that are aligned along a magnetic field drift away from it when the magnetic field increases. “This is unexpected,” Pappas said. “It is as if a ball that lies on the ground starts levitating when its mass or the gravitational force increases.”

The theoretical explanation of this surprising result, provided by the Hiroshima and Groningen groups, is based on the strong sensitivity of the magnetic spirals to weak interactions of relativistic origin. Thus, a slight change in the balance of relatively weak interactions can have major consequences on the magnetic properties of these chiral magnets.

The findings, which have been published in Science Advances, open up new ways to create and manipulate complex magnetic structures and use these structures for green IT applications.