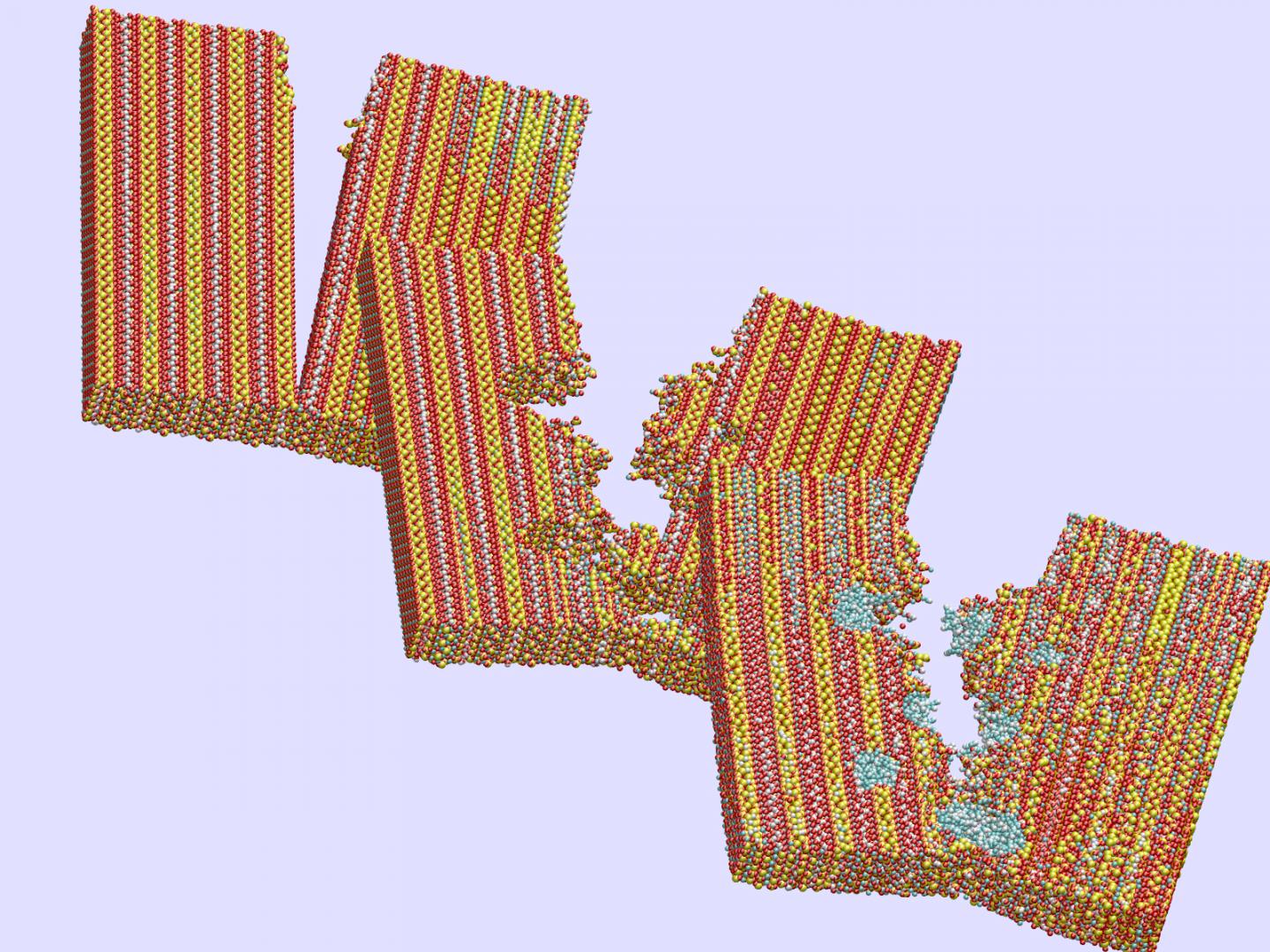 What does one need to strengthen or toughen concrete? A lot of nothing. Or something.

The “nothing” is in the form of microscopic voids and the “something” consists of particular particles embedded in the most common construction material on Earth. Rice University materials scientist Rouzbeh Shahsavari and postdoctoral researcher Ning Zhang analyzed more than 600 computer models of concrete’s inner matrix to determine that both voids and portlandite particles are significant players in giving the material its remarkable qualities.

The research appears this month in the Journal of the Mechanics and Physics of Solids.

Shahsavari and his team set out to provide new insights and to design guidelines and strategies to make the cement hydrate — known as calcium-silicate-hydrate (C-S-H) — at the heart of concrete more tunable from the molecules up. They found that while concrete may appear brittle at the macroscale, it incorporates ductile fracture mechanisms at the nanoscale that help to keep it from failing.

“C-S-H is the smallest building block in concrete, and we want to understand and control it to our advantage,” Shahsavari said. “Modeling how its molecules interact helps us understand its nanoscale structure, defects and fracture toughness. But this is very difficult to study through experiments alone because of the scale of the features we’re looking at.”

This latest in a series of studies from the Rice lab looks at how the interaction of either random air voids or random portlandite particles in C-S-H influence the mechanical qualities of strength, stiffness and toughness, especially where voids meet propagating cracks.

“Besides C-S-H, portlandite is another product of cement hydration, but it forms in lower quantities compared with C-S-H and mainly exists as sort of inclusions or isolated islands surrounded by the C-S-H matrix,” Shahsavari said. “Because portlandite has different crystalline features and mechanical properties than C-S-H, its presence and distribution can significantly impact the mechanics of C-S-H.”

Using molecular dynamics simulations, the researchers found that cracks tended to follow the path of least resistance and turn in the direction of either the nanovoids or portlandite particles they encountered. By deflecting or changing the geometry of a crack, the voids and particles sapped the crack of energy. Shahsavari said this likely contributes to concrete’s overall toughness.

“When it comes to cement hydrate’s strength and toughness — properties that are typically exclusive in man-made materials — random voids and portlandite particles play a key role by regulating a series of competing deformation mechanisms, such as crack growth, crack deflection, voids coalescence, internal necking, accommodation and geometry alteration of voids and particles,” Shahsavari said. “Our work decoded all such complex competing mechanisms.”

For C-S-H that is more amorphous than crystalline (as in tobermorite concrete), they found the addition of portlandite particles induced strong chemical reactions that increased the strength as well as the toughness of the product. They also determined that for all the variations tested, the smaller the mean diameter of both voids and particles, the stronger the material.

Since more than 30 billion tons of concrete are used each year and its manufacture contributes up to 10 percent of carbon dioxide emissions worldwide, the payoff from any small tweak is worth the effort, Shahsavari said.

“Our results provide, for the first time, new evidence of ductile fracture mechanisms in cement hydrate that are reminiscent of crystalline alloys and ductile metals,” Shahsavari said. “Given that crack growth and strength are an inherent property controlled by nanoscale deformation mechanisms, our findings can impact the mechanical properties of concrete at larger scales, opening up new opportunities and strategies to turn brittle cement hydrate into a ductile material. This would impact the modern engineering of durable concrete infrastructures and potentially other complex brittle materials.”