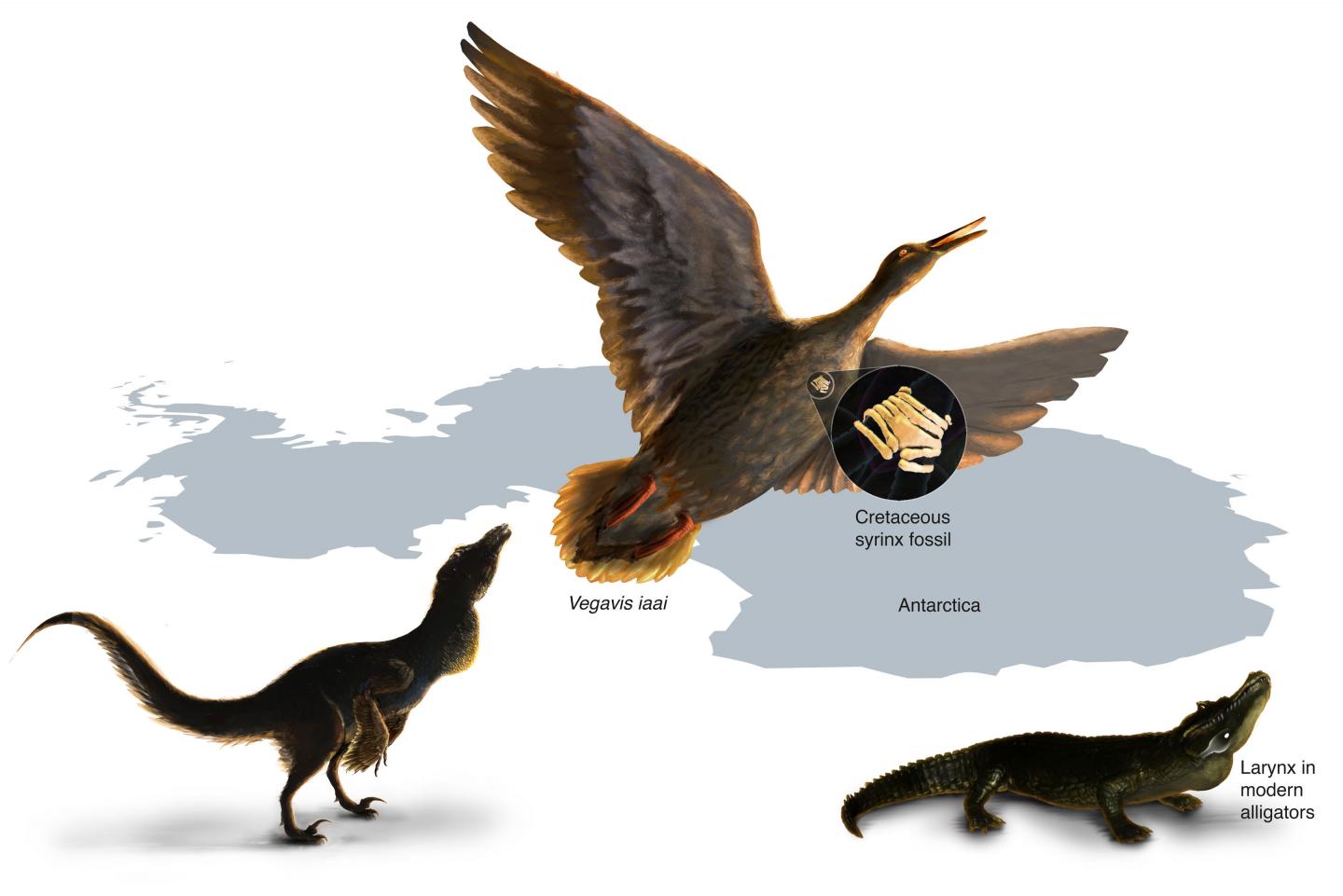 Study of the first fossil vocal organ from the Mesozoic provides insight into the evolution of bird calls and song. The fossil syrinx is from the late Cretaceous of Antarctica. Within dinosaurs there was a transition from a vocal organ present in the larynx (present in crocodiles) to one uniquely developed deep in the chest in birds. Source: Nicole Fuller/Sayo Art for UT Austin.

The oldest known vocal organ of a bird has been found in an Antarctic fossil of a relative of ducks and geese that lived more than 66 million years ago during the age of dinosaurs.

The discovery of the Mesozoic-era vocal organ–called a syrinx–and its apparent absence in nonavian dinosaur fossils of the same age indicate that the organ may have originated late in the evolution of birds and that other dinosaurs may not have been able to make noises similar to the bird calls we hear today, according to findings published in Nature on Oct 12. Birds are direct descendants of dinosaurs and are considered living dinosaurs by scientists.

“This finding helps explain why no such organ has been preserved in a nonbird dinosaur or crocodile relative,” said Julia Clarke, a paleontologist at The University of Texas at Austin Jackson School of Geosciences who discovered the fossil syrinx and led the analysis. “This is another important step to figuring out what dinosaurs sounded like as well as giving us insight into the evolution of birds.”

The syrinx is made of stiff, cartilage rings that support soft tissues that vibrate to produce the complex songs and calls of modern birds. Cartilage does not fossilize as well as hard tissues such as bone. But the high mineral content in the syrinx’s rings sometimes allows for fossilization. All other known examples of fossilized syrinxes occur in birds that lived well after nonavian dinosaurs went extinct.

The syrinx was found in a fossil of Vegavis iaai, a bird that lived during the Cretaceous. Clarke described the species in 2005. It was discovered on Antarctica’s Vega Island in 1992 by a team from the Argentine Antarctic Institute. However, it wasn’t until 2013 that Clarke noticed that the Vegavis fossil included a syrinx. During the past two years, the team searched the dinosaur fossil record for other examples of a syrinx, but so far has found none.

The asymmetrical shape of the syrinx indicates that the extinct species could have made honking noises via two sound sources in the right and left parts of the organ. The researchers also scanned syrinxes of other birds to compare with the Vegavis syrinx. This included 12 syrinxes from living birds and the next oldest fossilized syrinx, which had not yet been studied.

Franz Goller, a co-author and physiologist at the University of Utah, said the study is the beginning of the work to determine what the fossilized organ can tell us about the sounds of early birds.

“Here, we begin to outline how fossilizable characteristics of the syrinx may inform us about sound features, but we need a lot more data on living birds,” Goller said. “Remarkably, prior to this work, there is almost no discussion of these important questions.”

This study follows research that Clarke and other collaborators published in July 2016 that found some dinosaurs would likely have made closed-mouth vocalizations akin to ostrich booms that don’t require a syrinx. Together, the two studies have major implications for dinosaur sound-making throughout time, Clarke said.

In addition, the evolution of vocal behavior can give insights into other anatomical features, Clarke said, such as the appearance of bigger brains.

“The origin of birds is about so much more than the evolution of flight and feathers,” Clarke said.

To study sound production in more detail, part of the team is working with engineers to model sound-producing organs, a project funded by the Gordon and Betty Moore Foundation.