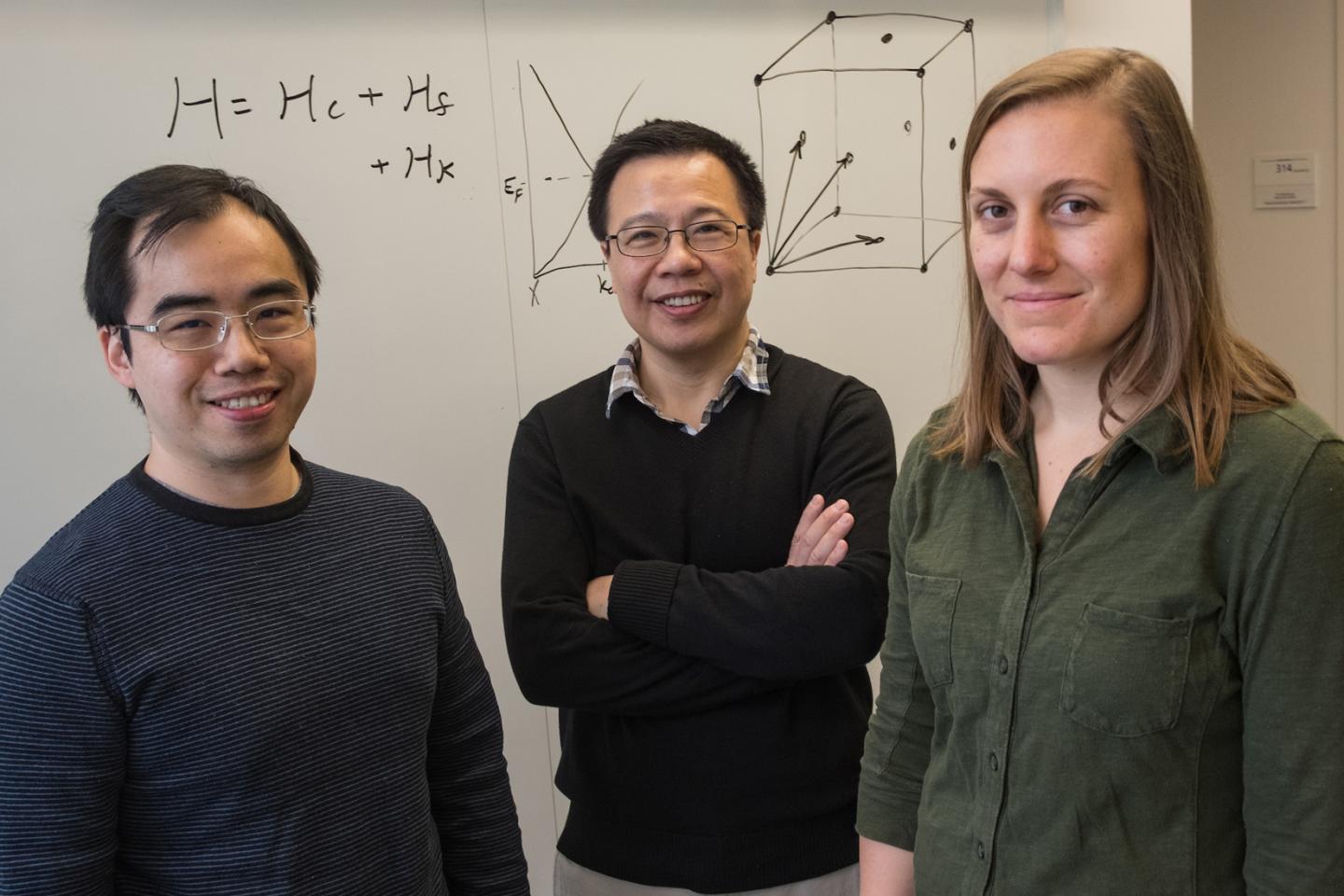 U.S. and European physicists searching for an explanation for high-temperature superconductivity were surprised when their theoretical model pointed to the existence of a never-before-seen material in a different realm of physics: topological quantum materials.

In a new study due this week in the Early Edition of the Proceedings of the National Academy of Sciences (PNAS), Rice University theoretical physicist Qimiao Si and colleagues at the Rice Center for Quantum Materials in Houston and the Vienna University of Technology in Austria make predictions that could help experimental physicists create what the authors have coined a "Weyl-Kondo semimetal," a quantum material with an assorted collection of properties seen in disparate materials like topological insulators, heavy fermion metals and high-temperature superconductors.

All these materials fall under the heading of "quantum materials," ceramics, layered composites and other materials whose electromagnetic behavior cannot be explained by classical physics. In the words of noted science writer Philip Ball, quantum materials are those in which "the quantum aspects assert themselves tenaciously, and the only way to fully understand how the material behaves is to keep the quantum in view."

These quirky behaviors arise only at very cold temperatures, where they cannot be masked by the overwhelming forces of thermal energy. The most celebrated quantum materials are the high-temperature superconductors discovered in the 1980s, so named for their ability to conduct electrical current without resistance at temperatures well above those of traditional superconductors. Another classic example is the heavy fermion materials discovered in the late 1970s. In these, electrons appear to be effectively hundreds of times more massive than normal and, equally unusual, the effective electron mass seems to vary strongly as temperature changes.

A generation of theoretical physicists dedicated their careers to explaining the workings of quantum materials. Si's work focuses on the collective behavior that emerges in electronic materials undergoing transformation from one quantum state to another. It is near such points of transformation, or "quantum critical points," that phenomena like high-temperature superconductivity occur.

In 2001, Si and colleagues offered a new theory that explained how electronic fluctuations between two entirely different quantum states give rise to such behaviors at quantum critical points. The theory has allowed Si and colleagues to make a host of predictions about the quantum behavior that will arise in particular types of material as the materials are cooled to the quantum critical point. In 2014, Si was tapped to lead the Rice Center for Quantum Materials (RCQM), a universitywide effort that draws upon the work in more than a dozen Rice groups across the schools of Natural Sciences and Engineering.

"We have been absolutely fascinated by strongly correlated materials," Si said of his own group. "Collective behavior such as quantum criticality and high-temperature superconductivity have always been the center of our attention.

"Over the past two years, several experimental groups have reported nontrivial topology in solid-state conducting materials, but it's an open question whether there are conducting states that have nontrivial topology and are, at the same time, strongly interacting. No such materials have been realized, but there's a lot of interest in looking for them."

In the PNAS study, Si said he and postdoctoral fellow Hsin-Hua Lai and graduate student Sarah Grefe were working with a set of models to examine questions related to quantum criticality and high-temperature superconductors.

"We really just stumbled upon a model in which, suddenly, we found that the mass had gone from like 1,000 times the mass of an electron to zero," Lai said. A signature characteristic of "Weyl fermions," elusive quantum particles first proposed by Hermann Weyl more than 80 years ago, is that they have zero mass.

Experimentalists have only recently provided evidence for the existence of solid-state conducting materials that qualify as hosting Weyl fermions. These materials share some of the characteristics of topological insulators, a type of quantum material that gained international attention following the awarding of the 2016 Nobel Prize in Physics, but are quite distinct in other ways. Traditionally, topological materials have only been defined in insulators, and electricity would flow only on the materials' surface and not through the bulk. The topological conductors, however, carry electricity in the bulk, thanks to the Weyl fermions.

"These topological conductors can be described within the textbook framework of independent electrons," Grefe said. "The central question, as challenging as it is fascinating, is this: What happens when the electron correlations are strong?"

In examining their work more closely, Si, Lai and Grefe demonstrated that their zero-mass fermions are intimately tied to both strong electron correlations and nontrivial topology.

"We quickly realized that these are Weyl fermions that originate from a quintessential strong-correlation physics called the Kondo effect," Grefe said. "We therefore dubbed this state a Weyl-Kondo semimetal."

The Kondo effect captures how a band of electrons, which are so strongly correlated with each other that they act as localized spins, behave in a background of conduction electrons.

Together with study co-author Silke Paschen, an experimental physicist at Vienna University of Technology who was spending six months at RCQM as a visiting professor when the discovery was made, Si, Lai and Grefe sought to identify the unique experimental signatures of the Weyl-Kondo semimetal.

"We found that the Kondo effect makes the Weyl fermions move with a velocity that differs by several orders of magnitude from the noninteracting case," Lai said. "This allowed us to predict that the electron correlations will enhance a particular quantity in the temperature dependence of the specific heat by a mind-boggling factor of a billion."

Si said this effect is huge, even by the standard of strongly correlated electron systems, and the work points to a larger principle.

"The Kondo effect in these kinds of materials occurs in the vicinity of magnetic order," Si said. "Our previous work has shown that high-temperature superconductivity tends to develop in systems on the verge of magnetic order, and this study suggests that some strongly correlated topological states develop there as well.

"This may well represent a design principle that will guide the search for a wide variety of strongly correlated topological states," he said.