Researchers at MIT and elsewhere have found a new way of using mid-infrared lasers to turn regions of molecules in the open air into glowing filaments of electrically charged gas, or plasma. The new method could make it possible to carry out remote environmental monitoring to detect a wide range of chemicals with high sensitivity.

The new system makes use of a mid-infrared ultra-fast pulsed laser system to generate the filaments, whose colors can reveal the chemical fingerprints of different molecules. The finding is being reported this week in the journal Optica, in a paper by principal investigator Kyung-Han Hong of MIT’s Research Laboratory of Electronics, and seven other researchers at MIT; in Binghamton, New York; and in Hamburg, Germany.

Hong explains that such filaments, as generated by lasers in the near-infrared part of the electromagnetic spectrum, have been widely studied already because of their promise for uses such as laser-based rangefinding and remote sensing. The filament phenomenon, generated by high-power lasers, serves to counter the diffraction effects that usually take place when a laser beam passes through air. When the power level reaches a certain point and the filaments are generated, they provide a kind of self-guiding channel that keeps the laser beam tightly focused.

But it is the mid-infrared (mid-IR) wavelengths, rather than the near-IR, that offer the greatest promise for detecting a wide variety of biochemical compounds and air pollutants. Researchers who have tried to generate mid-IR filaments in open air have had little success until now, however.

Only one previous research team has ever succeeded in generating mid-IR laser filaments in air, but it did so at a much slower rate of about 20 pulses per second. The new work — which uses 1,000 pulses per second — is the first to be carried out at the high rates needed for practical detection tools, Hong says. 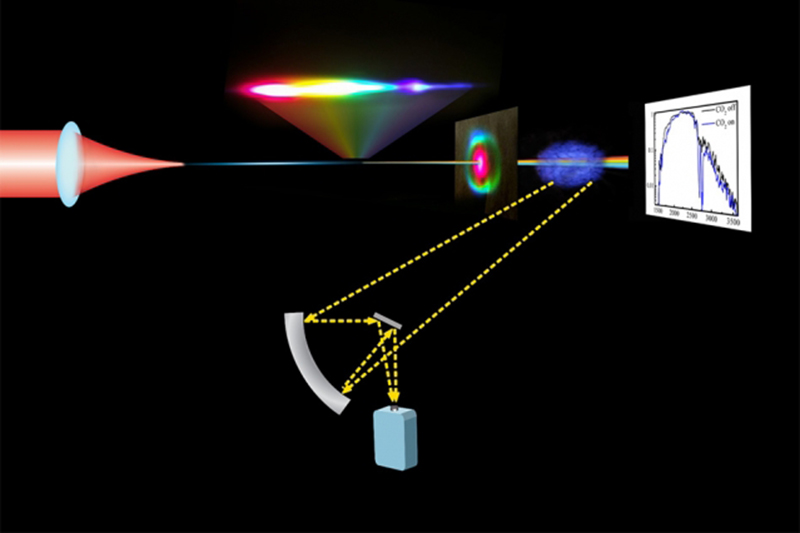 This diagram depicts the way a mid-infrared laser (red cylinder, left) can send a beam through the atmosphere that generates filaments of ionized air molecules (multicolored beam, center, shown with magnified view). These filaments, which can be kilometers long, help to keep the beam concentrated enough to generate mid-infrared light in air (blue cloud, right) that can reveal detailed chemical composition through spectral analysis (chart at right) of the light picked up by a mid-infrared detector (bottom). Image: Diagram courtesy of the researchers

“People want to use this kind of technology to detect chemicals in the far distance, several kilometers away,” Hong says, but they have had a hard time making such systems work. One key to this team’s success is the use of a high-power femtosecond laser with pulses just 30 femtoseconds, or millionths of a billionth of a second, long. The longer the wavelength, the more laser peak power is needed to generate the desired filaments, due to stronger diffraction, he says. But the team’s femtosecond laser, coupled with what is known as a parametric amplifier, provided the necessary power for the task. This new laser system has been developed together with Franz X. Kaertner in Hamburg and other group members for last several years. At these mid-IR wavelengths, Hong says, this device produces “one of the highest peak-power levels in the world,” producing 100 gigawatts (GW, or billion watts) of peak power.

It takes at least 45 GW of power to generate the filaments at these mid-infrared wavelengths, he says, so this device easily meets that requirement, and the team proved that it did indeed work as expected. That now opens up the potential for detecting a very wide range of compounds in the air, from a distance.

Using spectrally broadened mid-IR laser filaments, “we can detect virtually any kind of molecule you want to detect,” Hong says, including various biohazards and pollutants, by detecting the exact color of the filament. In the mid-IR range, the absorption spectrum of specific chemicals can be easily analyzed.

So far, the experiments have been confined to shorter distances inside the lab, but the team expects that there’s no reason the same system wouldn’t work, with further development, at much larger scales. “This is just a proof-of-principle demonstration,” Hong says.

This research “is one of the very first investigations of self-channeling of ultraintense mid-IR laser pulses in the air,” says Pavel Polynkin, an associate research professor of optical sciences at the University of Arizona, who was not involved in this work. “Whether there will be new and exciting applications, time will show.”

“I think there is an agreement in the ultrafast laser community that the exploration of the mid-infrared spectral domain is going to be a new frontier in ultrafast laser science,” Polynkin adds. “The extension of intense atmospheric propagation regimes into the mid-IR spectral range certainly holds a lot of promise to overcome the limitations associated with the very well-explored near-IR spectral range, namely the very unstable propagation dynamics in the near-IR. The authors tapped into a new domain of intense nonlinear optics. Without a doubt there will be follow-up work.”