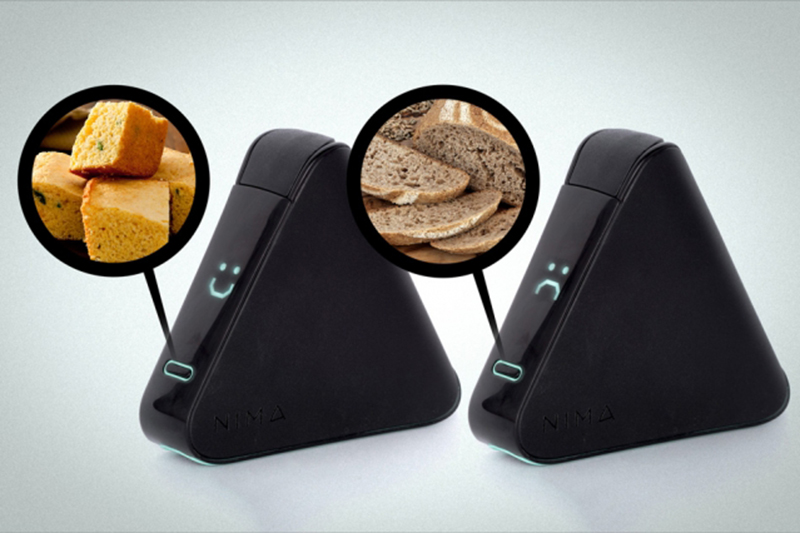 To use the Nima sensor, a new device that can detect gluten, diners put a pea-sized sample of food or liquid into a disposable capsule, and insert the capsule into the device, which mixes the food into a solution that detects gluten. In two to three minutes, a digital display appears on the sensor, indicating if the food sample does or doesn’t contain gluten. Image: Courtesy of Nima (edited by MIT News)

For people with celiac disease or gluten intolerances, dining out can be stressful. Even trace amounts of the protein — found in wheat, barley, and rye — in a whole plate of food can cause adverse reactions.

Nima’s sensor, also called Nima, is a 3-inch-tall triangular device with disposable capsules. Diners put a sample of food — about the size of a pea — or liquid into the capsule, screw on the top, and insert the capsule into the device, which mixes the food into a solution that detects gluten. In two to three minutes, a digital display appears on the sensor, indicating if the food sample does or doesn’t contain gluten.

Every time someone runs a test, the result is automatically sent to an app Nima has developed. The diner can enter information about where and what they ate, and whether the food contained gluten. Any Nima user can log in to see the results.

The aim is to create “a peace of mind at mealtime,” Sundvor says. By amassing data on food, he adds, the startup hopes to provide people with better information about what they eat. “Right now, we don’t know what’s in our food, whether it is allergens, pesticides, or other harmful chemicals,” he says. “There’s not a good way to get that data. We want to give people the ability to understand their food better and how it affects their health.”

Nima can sense gluten at 20 parts per million (ppm) or more, the maximum concentration for “gluten-free” foods as determined by the U.S. Food and Drug Administration.

Nima’s high sensitivity comes from the immunoassay inside the sensor, developed primarily by MIT chemical engineering alumnus Jingqing Zhang, who is now the lead scientist at Nima. The immunoassay contains custom antibodies that are highly sensitive to gluten molecules. When gluten is present, the antibody bonds to the gluten molecules, causing a color change in the immunoassay, which is captured by an optical reader. If any gluten is detected, the sensor will display an icon with a “gluten found” message. If the sample has less than 20 ppm of gluten, the sensor will display a smiley face.

Nima can detect gluten in foods that are labeled as “gluten-free” but may have picked up microscopic amounts of the protein during the production or cooking process. A steak may have been fried on the same grill as gluten-based foods, for example, or a salad dressing may contain trace amounts of wheat flour. The device can even detect if someone touched a piece of bread that contained gluten, before handling the food in question. “It’s the equivalent to finding a breadcrumb in an entire plate of food,” Sundvor says.

Moreover, Sundvor says, the device seamlessly integrates that chemistry with electronics and mechanics. “We’ve created this grinding, mixing, and extracting system, and together it works really well,” he says.

Nima was founded in 2013 as GlutenTech, when Yates, then an MIT Sloan School of Management student, dreamt up an idea for a portable gluten sensor. Seeking an engineer to bring the device to life, she met Sundvor, a recent MIT graduate who had studied mechanical engineering and product design.

Together, they set up shop at the now-defunct MIT Beehive, a startup incubator on MIT’s campus, with aims of filling “a huge consumer gap” in food-allergen testing, Sundvor says. Conventional at-home tests, he says, require equipment such as test tubes, pipettes, a mortar and pestle, and microscale. “You can’t bring test tubes to a restaurant,” he says.

Sundvor began working long hours in an MIT machine shop building a prototype, while Yates brought the idea around to her MIT Sloan classes. Of note was a particular pricing class, where students sketched out pricing and demand models for the product. “The result of that was that I found there’s a real opportunity here: There’s a need and a willingness to pay,” Yates says.

In spring 2013, GlutenTech entered the MIT $100K Entrepreneurship Competition with a proof-of-concept model, and they earned the Audience Choice Award in the Accelerate contest. That summer, the team entered the Global Founders Skills Accelerator (GFSA), a 12-week startup program held at the Martin Trust Center for MIT Entrepreneurship.

Participating in the $100K forced the team develop a business plan they could pitch to investors, Yates says. “It was a testing period to see, if we position ourselves in a certain way, will it resonate with investors?” she says.

“The GFSA was incredible,” Sundvor adds, “It gave us the opportunity to have a safe space to go full-out on this for three months, have mentors, and have just enough money to squeak by.”

By the time the GFSA Demo Day rolled around in September, GlutenTech had its first working prototypes — “which were so ugly,” Sundvor says, laughing.

The 9-inch-long aluminum tubes “looked like lightsaber handles,” Sundvor says. Inside the tubes were chemicals used in conventional food tests, and the system took about 10 minutes to detect gluten. When it did, a bright light flashed and a loud alarm went off. “We got many looks at restaurants,” Sundvor says. “But they worked and got us our first investors.”

Three years ago, GlutenTech moved headquarters from Boston to San Francisco, and changed its name to 6SensorLabs. This year, they renamed the startup as Nima. In three years, the startup has gained more than $14 million in capital venture funding.

Consumers are the startup’s first market. But as more individuals start using Nima, restaurants will have more data on their food to better serve patrons, Sundvor says. A couple of restaurants in San Francisco, in fact, are working with Nima on validating their gluten-free menu items.

Next year, Nima plans to release two new sensors, one for peanuts and one for dairy, which is “surprisingly sneaky,” Sundvor says. Bread at a restaurant, for instance, could have been fried in a pan with remnants of butter. “A lot of people are getting sick from dairy allergies, so that will be a big market,” Sundvor says.