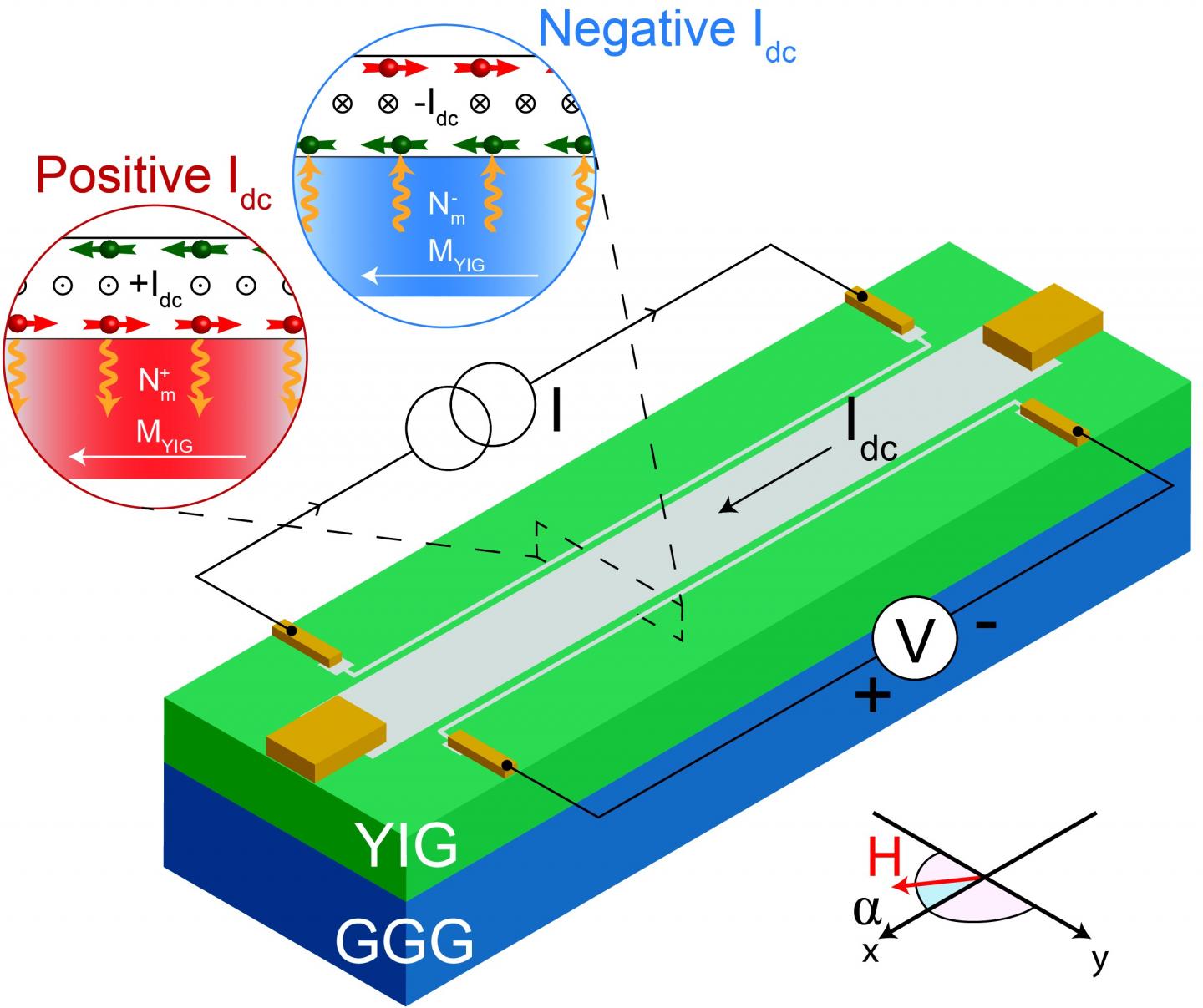 Schematic illustration of the magnon transistor. The device consists of a substrate of gadolinium gallium garnet (GGG), a thin film of yttrium iron garnet (YIG, the magnetic insulator) and platinum electrodes (the grey structure on the surface of the YIG). The narrow electrodes on the sides are used to inject or detect magnons, and the broad middle electrode is the modulator contact: By sending a dc current through the modulator, the magnon density in the magnetic insulator can be influenced. A positive DC current generates extra magnons, while a negative current reduces the magnon density. This causes the magnon current between the outermost electrodes to increase or decrease. Credit: Ludo Cornelissen / University of Groningen

University of Groningen physicists have managed to alter the flow of spin waves through a magnet, using only an electrical current. This is a huge step towards the spin transistor that is needed to construct spintronic devices. These promise to be much more energy efficient than conventional electronics. The results were published on 2 March in Physical Review Letters.

Spin is a quantum mechanical property of electrons. Simply put, it makes electrons behave like small magnetic compass needles which can point up or down. This can be used to transfer or store information, creating spintronic devices that promise several advantages over normal microelectronics.

In a conventional computer, separate devices are needed for data storage (often using a magnetic process) and data processing (electronic transistors). Spintronics could integrate both in one device, so it would no longer be necessary to move information between storage and processing units. Furthermore, spins can be stored in a non-volatile way, which means that their storage requires no energy, in contrast to normal RAM memory. All this means that spintronics could potentially make faster and more energy-efficient computers.

To realize this, many steps have to be taken and a lot of fundamental knowledge has to be obtained. The Physics of Nano Devices group of physics professor Bart van Wees at the University of Groningen’s Zernike Institute of Advanced Materials is at the forefront of this field. In their latest paper, they present a spin transistor based on magnons. Magnons, or spin waves, are a type of wave that only occurs in magnetic materials. ‘You can view magnons as a wave, or a particle, like electrons’, explains Ludo Cornelissen, PhD student in the Van Wees group and first author of the paper.

In their experiments, Cornelissen and Van Wees generate magnons in materials that are magnetic, but also electrically insulating. Electrons can’t travel through the magnet, but the spin waves can – just like a wave in a stadium moves while the spectators all stay in place. Cornelissen used a strip of platinum to inject magnons into a magnet made of yttrium iron garnet (YIG). ‘When an electron current travels through the strip, electrons are scattered by the interaction with the heavy atoms, a process that is called the spin Hall effect. The scattering depends on the spin of these electrons, so electrons with spin up and spin down are separated.’

At the interface of platinum and YIG, the electrons bounce back as they can’t enter the magnet. ‘When this happens, their spin flips from up to down, or vice versa. However, this causes a parallel spin flip inside the YIG, which creates a magnon.’ The magnons travel through the material and can be detected with a second platinum strip.

‘We described this spin transport through a magnet some time ago. Now, we’ve taken the next step: we wanted to influence the transport.’ This was done using a third platinum strip between injector and detector. By applying a positive or negative current, it is possible to either inject additional magnons in the conduction channel or drain magnons from it. ‘That makes our set up analogous to a field effect transistor. In such a transistor, an electric field of a gate electrode reduces or increases the number of free electrons in the channel, thus shutting down or boosting the current.’

Cornelissen and his colleagues show that adding magnons increases the spin current, while draining them causes a significant reduction. ‘Although we were not yet able to switch off the magnon current completely, this device does act as a transistor’, says Cornelissen. Theoretical modelling shows that reducing the thickness of the device can increase the depletion of magnons enough to stop the magnon current completely.

But there is another interesting option, explains Cornelissen’s supervisor Bart van Wees: ‘In a thinner device, it could be possible to increase the amount of magnons in the channel to a level where they would form a Bose-Einstein condensate.’ This is the phenomenon that is responsible for superconductivity. And it occurs at room temperature, contrary to normal superconductivity, which only occurs at very low temperatures.

The study shows that a YIG spin transistor can be made, and that in the long run this material could even produce a spin superconductor. The beauty of the system is that spin injection and control of spin currents is achieved with a simple DC current, making these spintronic devices compatible with normal electronics. ‘Our next step is to see if we can realize this promise’, concludes Van Wees.