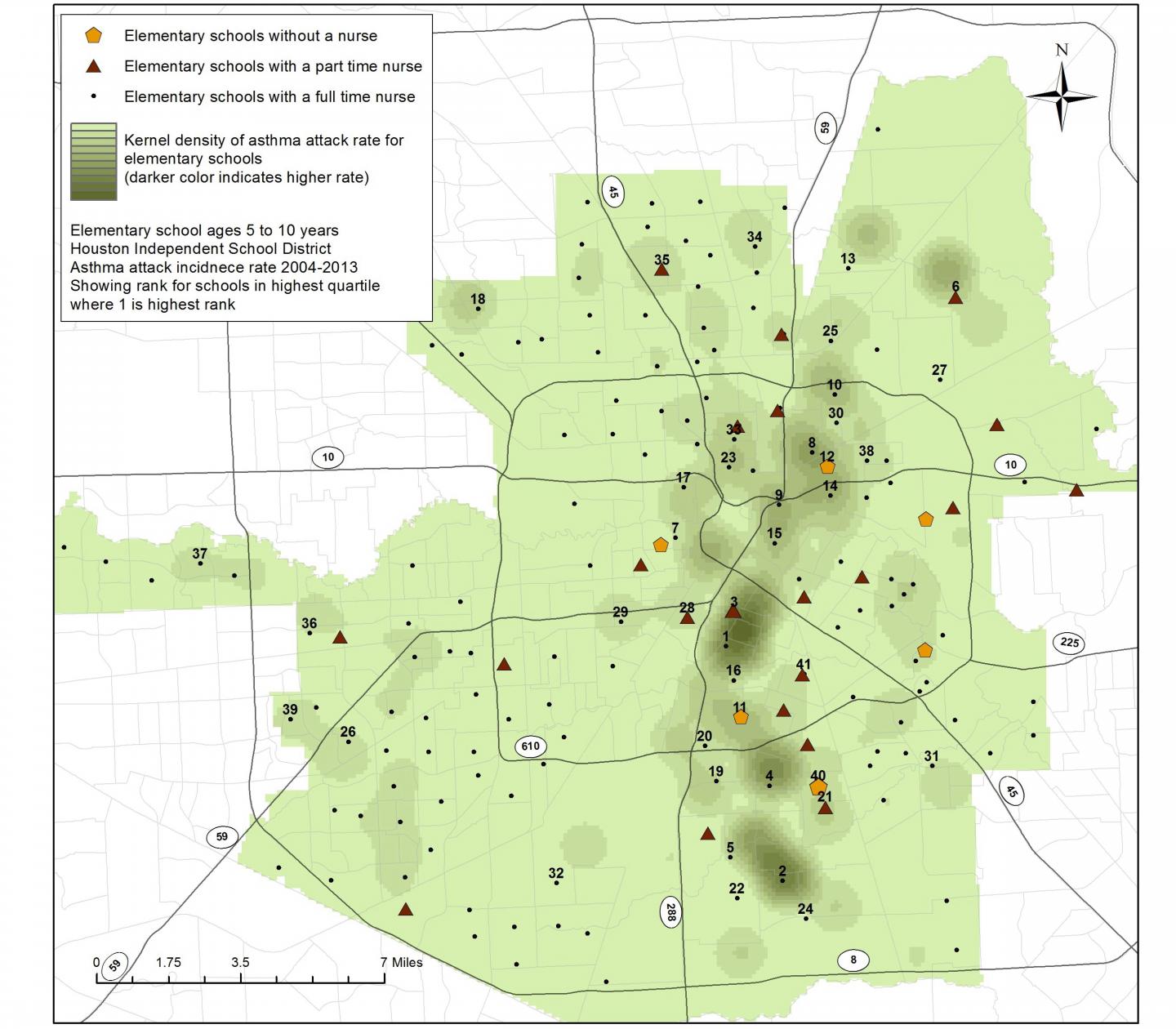 A map produced for a study in the Journal of School Health shows where ambulances responded to elementary school zones in Houston from 2004 to 2013, as well as school nurse assignments. The study by Rice University researchers in collaboration with the city and Houston Independent School District details where and when students with asthma were most likely to suffer attacks that required emergency treatment over a 10-year span. Source: Laura Campos/Rice University

“Preventable” asthma attacks among schoolchildren cost millions in health care dollars over 10 years, according to a new study by the city of Houston, Rice University and the Houston Independent School District (HISD).

The revelation is part of a project that seeks to minimize risk to students by showing where, when and how often emergency medical crews were called to treat “uncontrolled” asthma attacks at public schools in Houston and at students’ homes.

When asthma is not controlled either by medication or mitigated by strategies that protect children from triggers that place them at risk, an asthma attack is more likely to happen, according to the researchers. High ozone or nitrogen dioxide levels in the atmosphere can trigger attacks outdoors. Smoke, cleaning products and other household items can trigger them indoors.

The most effective solution may be ensuring that school staff, especially nurses, know which students are at risk, when to shield them from triggers and how to respond when attacks occur, the researchers said.

Several years ago, the team led by Rice statisticians Katherine Ensor and Loren Raun and Houston Public Health Authority David Persse set out to map regions with high air-quality risks and their proximity to HISD schools and compare them with ambulance data collected by the city’s emergency medical services from 2004 to 2013. In partnership with Gwen Johnson, health and medical services nurse manager at HISD, that led to a more comprehensive look at how well schools support students with asthma.

The data listed 1,826 ambulance-treated asthma attacks for children age 5 to 18, with details on where and when those incidents occurred. The researchers’ maps showed a strong link between asthma incidents where an ambulance was needed for treatment and a swath of HISD schools on Houston’s east side.

The number of cases was five times higher for elementary students, three times higher for middle school students and twice that for high school students in the highest-case school zones compared with all other school zones in the city, the researchers reported. They noted students with asthma who are poor or African-American but attend schools with full-time nurses miss 23 percent fewer days than their counterparts in schools with part-time nurses.

At an estimated cost of as much as $10,000 per response, including transportation, emergency room and hospital costs, the researchers said it would be worthwhile for Houston and other cities to focus policies and program interventions to help students manage asthma.

“We identify the cases by school zone, but the ambulance may not come to the school,” said Raun, who also works with Houston’s Health Department. “A child can start feeling asthma symptoms building while at school, go home and wake up in the middle of the night unable to breathe.

“So ambulances aren’t often called to the school, but school nurses are the key to monitoring children at risk of attacks,” she said. “They see them on a regular basis, know who’s at risk and can be the first line of defense, but they have to have an asthma action plan on file, and it has to be correct and up-to-date to treat the child effectively.”

Rice and the city are helping HISD nurses on the front lines. Using Rice algorithms, the Health Department automatically emails nurses to warn them when outdoor air quality could trigger an attack. “We know the conditions that historically cause asthma attacks,” Raun said. “The nurses let their faculty members know when the condition of outdoor air poses a risk and have a list of actions that should be taken to reduce the chance of an attack.”

Rice also hosts workshops for school nurses to discuss strategies and the Health Department is running a pilot program backed by the Centers for Disease Control and Prevention to build communications among the department, school nurses, health care providers and health insurers.

“It’s all about integrating the care we are already individually providing to the child so that our services can be more effective,” Raun said. The pilot incorporates Health Department community workers who visit the homes of children with asthma to help parents with medication or to identify triggers in the home and help the school nurse, health care provider and health plan provider communicate.