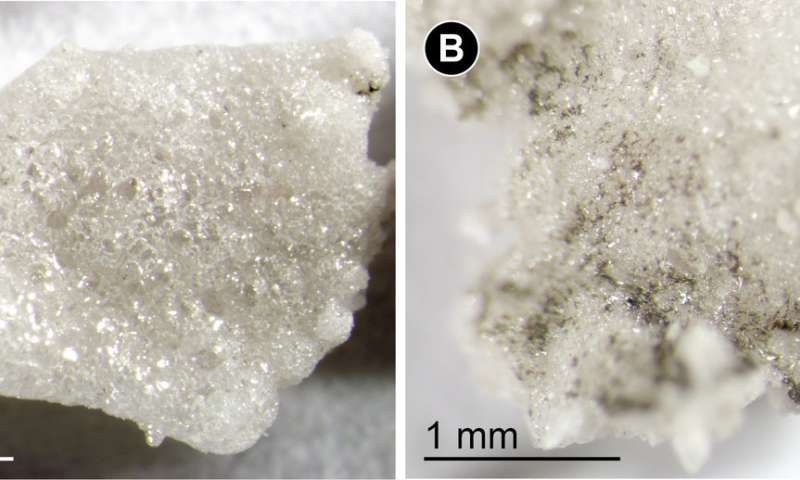 Experiments using a high-powered projectile cannon show how impacts by water-rich asteroids can deliver surprising amounts of water to planetary bodies. The research, by scientists from Brown University, could shed light on how water got to the early Earth and help account for some trace water detections on the Moon and elsewhere.

“The origin and transportation of water and volatiles is one of the big questions in planetary science,” said Terik Daly, a postdoctoral researcher at Johns Hopkins University who led the research while completing his Ph.D. at Brown. “These experiments reveal a mechanism by which asteroids could deliver water to moons, planets and other asteroids. It’s a process that started while the solar system was forming and continues to operate today.”

The research is published in Science Advances.

The source of Earth’s water remains something of a mystery. It was long thought that the planets of the inner solar system formed bone dry and that water was delivered later by icy comet impacts. While that idea remains a possibility, isotopic measurements have shown that Earth’s water is similar to water bound up in carbonaceous asteroids. That suggests asteroids could also have been a source for Earth’s water, but how such delivery might have worked isn’t well understood.

“Impact models tell us that impactors should completely devolatilize at many of the impact speeds common in the solar system, meaning all the water they contain just boils off in the heat of the impact,” said Pete Schultz, co-author of the paper and a professor in Brown’s Department of Earth, Environmental and Planetary Sciences. “But nature has a tendency to be more interesting than our models, which is why we need to do experiments.”

For the study, Daly and Schultz used marble-sized projectiles with a composition similar to carbonaceous chondrites, meteorites derived from ancient, water-rich asteroids. Using the Vertical Gun Range at the NASA Ames Research Center, the projectiles were blasted at a bone-dry target material made of pumice powder at speeds around 5 kilometers per second (more than 11,000 miles per hour). The researchers then analyzed the post-impact debris with an armada of analytical tools, looking for signs of any water trapped within it.

They found that at impact speeds and angles common throughout the solar system, as much as 30 percent of the water indigenous in the impactor was trapped in post-impact debris. Most of that water was trapped in impact melt, rock that’s melted by the heat of the impact and then re-solidifies as it cools, and in impact breccias, rocks made of a mish-mash of impact debris welded together by the heat of the impact.

The research gives some clues about the mechanism through which the water was retained. As parts of the impactor are destroyed by the heat of the collision, a vapor plume forms that includes water that was inside the impactor.

“The impact melt and breccias are forming inside that plume,” Schultz said. “What we’re suggesting is that the water vapor gets ingested into the melts and breccias as they form. So even though the impactor loses its water, some of it is recaptured as the melt rapidly quenches.”

The findings could have significant implications for understanding the presence of water on Earth. Carbonaceous asteroids are thought to be some of the earliest objects in the solar system—the primordial boulders from which the planets were built. As these water-rich asteroids bashed into the still-forming Earth, it’s possible that a process similar to what Daly and Schultz found enabled water to be incorporated in the planet’s formation process, they say. Such a process could also help explain the presence of water within the Moon’s mantle, as research has suggested that lunar water has an asteroid origin as well.

The work could also explain later water activity in the solar system. Water found on the Moon’s surface in the rays of the crater Tycho could have been derived from the Tycho impactor, Schultz says. Asteroid-derived water might also account for ice deposits detected in the polar regions of Mercury.

“The point is that this gives us a mechanism for how water can stick around after these asteroid impacts,” Schultz said. “And it shows why experiments are so important because this is something that models have missed.”