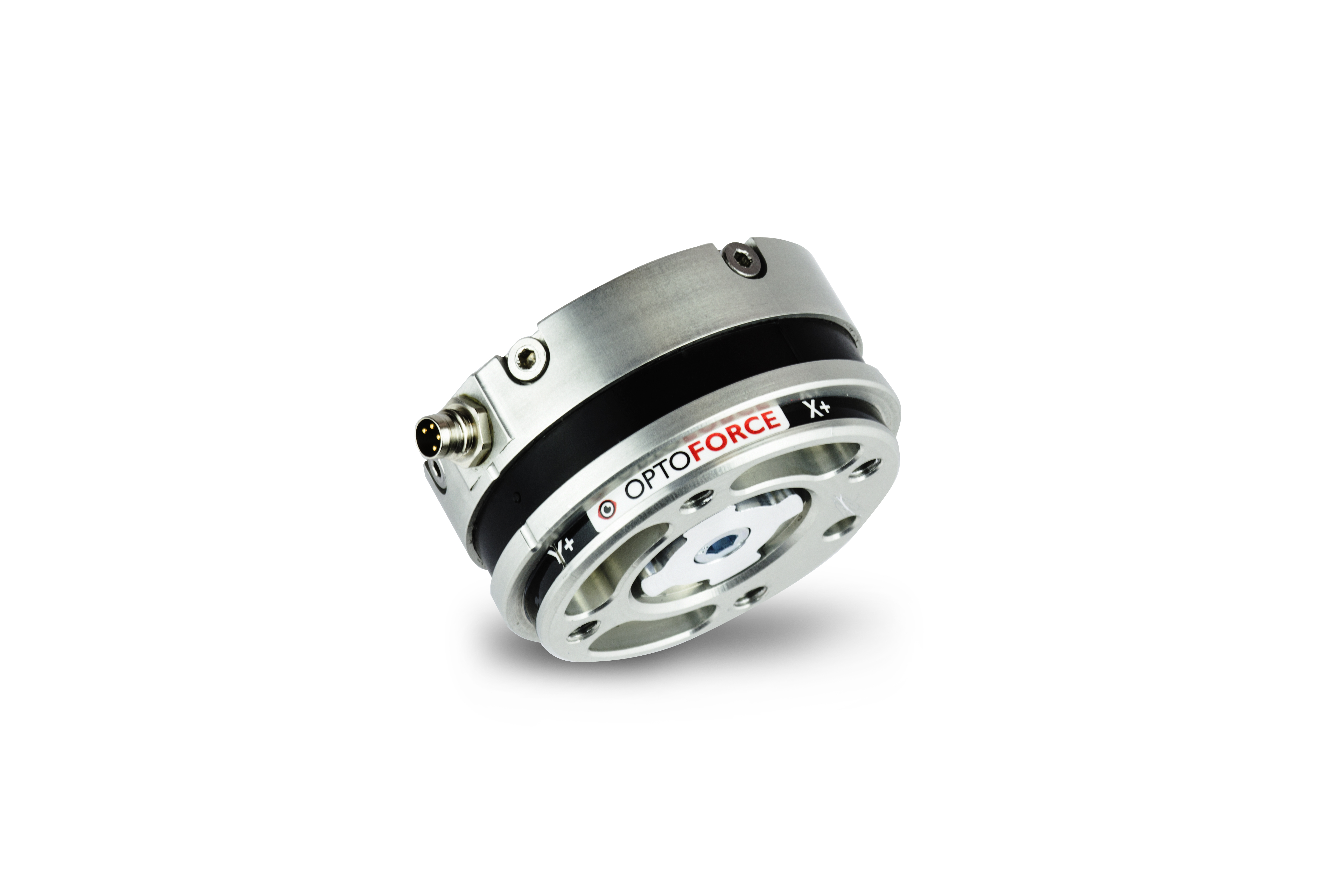 In 2012, two inspiring Ph.D.’s, Ákos Tar and József Veres, were studying bionics and robotics in the same class in college. The two started a project to build a two-legged robot. During this research and development, one of the focus areas was to develop the senses of the robot to create its ability to touch and feel objects to measure forces on its leg along the X-Y-Z axes. This led them to the development of a layered structure in which silicone would actually change its form under a greater load and made measurement possible in all directions.

Since that time, OptoForce has become a market leader in helping to bring multi-axial force and torque control with optical technology to a wide range of businesses and industries relying on industrial automation and robotics for their operations.

Today, OptoForce equips industrial robots with a sense of touch so that more tasks can be automated, freeing production from redundant, tedious tasks that are needed, and helping businesses save significant time and money.

The company, based in Budapest, Hungary with customers and distributors located around the world, recently announced the opening of its U.S. office to help companies across the U.S. and Canada.

Here are some of the company capabilities.

Optical force sensing measures deformation and deducts the applied load. Strain gauge technology has been the most prominent on the market since its inception in 1938. The principles haven’t changed much since that time, and so the primary limitations such as brittle structure, expensive manufacturing and heavy weight, has been constraining widespread application. Optical, silicone-based-force sensors, which were first commercially available from OptoForce, are now opening up new possibilities in automation for companies around the world.

3-Axis Force Sensing: OptoForce sensors have only one structure for measuring deformation along the 3-axes (X, Y, Z). In optical force sensors, photodiode measures the amount of reflected light, originally emitted by the LED. By comparing the measured values on the photodiodes, the acting forces can be precisely reconstructed, not just by the magnitude but also the direction

6-Axis Force/Torque Sensing: Six-axis sensors can measure the lateral forces along with the torques around the X, Y and Z vectors. An array of the three-axis sensors can be used to construct a six-axis force/torque sensor as well.

The OptoForce six-axis Force/Torque Sensors provide six degrees of freedom force and torque measurement and are designed for industrial automation applications that require human hand dexterity. The sensors are made to fit most of the currently used industrial robot arms and were developed so that integration with various interfaces is simple.

More specifically, the following applications are examples of where robotics can take advantage of OptoForce’s sensors:

Presence Detection: The OptoForce Force Torque Sensor, along with the OptoForce Move application, fine tunes a Universal Robot’s protective stop function, so that even the smallest counterforces – that are smaller than 10 N – can be perceived.

Center Pointing: The Center Point solution provides for an easy-to-find center point, even if the object has moved away from the original position.

Hand Guiding: It is possible to move the robot by hand on all 6 axes or by locking the movement of any selected axes for precise positioning. This is an easy-to-use for guiding the robot in a fast and precise way.

Path Recording: Using the Path Recording function of the OptoForce Hand Guide Toolbar can create a program within minutes so that any complex path can be easily recorded.

Polishing (Plastic and Metal): With this solution, you can remove the parting lines of plastic objects fast and easy. OptoForce’s polishing application provides high quality polishing, even with forces under 10 Newtons.

Box Insertion:The Box Insertion solution helps to insert items; for example, inserting a battery inside an electronic device with speed, accuracy, and simplicity.

Pin in the Hole:With this solution, robots can precisely fit or insert mating parts with very high tolerances. This solution helps to find the hole and place any pin into it in a fast and precise manner.

Stacking/Destacking:A force controlled application enables the stacking and de-stacking of products without needing to know the exact thickness and the height of the stack.

Palletizing: The force controlled application also allows the robot to stack products onto pallets. This can be quite advantageous for items that are hard to work such as cardboard boxes.

OptoForce sensors are being used by various companies on numerous projects around the world. A few real-world examples of where the sensors are being used include: a plastic parting line removal; an obstacle detection for a major car manufacturing company; and a center point insertion application for a car part supplier, where the task of the robot is to insert a mirror, completely centered, onto a side mirror housing.

The 6-Axis Force/Torque Sensors are available in two models:  Model HEX-E and Model HEX-H. The main difference between the two is that the HEX-E has higher precision, while the HEX-H has lower deformation.

The Advantages of OptoForce Force/Torque Sensors

OptoForce’s HEX-E and HEX-H are sold through a global network of distributors primarily to systems integrator companies. The HEX-E and HEX-H hardware and software helps to shorten the systems integration time, as users have less programming to do when using the sensors, as well as the significant time savings derived from automating precision-oriented tasks.

During the research and development of its sensors, OptoForce took great strides to advance the capability of its sensors in contrast to existing sensors on the market:

Robust and Durable: Businesses generally have found it quite frustrating in robotics that many sensors tend to be fragile, and easy-to-break. OptoForce sensors represent – regardless of the application – durability and robustness. On numerous occasions, customers have stated that they have broken multiple, highly valuable F/T sensors manufactured by others over the years because of overload and higher impact forces. However, OptoForce has developed a highly deformative property of silicone to ensure its sensors guarantee precise measurements all the way up to 200% overload. Even after total deformation during 600% overload, the silicone regains its original form and is able to measure forces with the same precision, without any hint of permanent damage. This is because these sensors were built to resist sudden shocks.

Resolution: OptoForce’s sensors possess much greater resolution than other competitive offerings with a 0.1N or 0.001Nm.

Pricing/Value: Leveraging modern technological advances, the company has built sensors and can offer businesses a strong price and value for money. Its low prices give access to highly precise force/torque sensors to the marketplace.

A Variety of Solutions: Depending on the application, there is a wide range of uses for both the 3 and 6 axis OptoForce sensors.

Ákos Dömötör is the CEO of OptoForce. Ákos leads all strategic initiatives at OptoForce in helping customers save production time and money by equipping their robots with a sense of touch to automate tasks.  He can be reached at akos.domotor@optoforce.com.