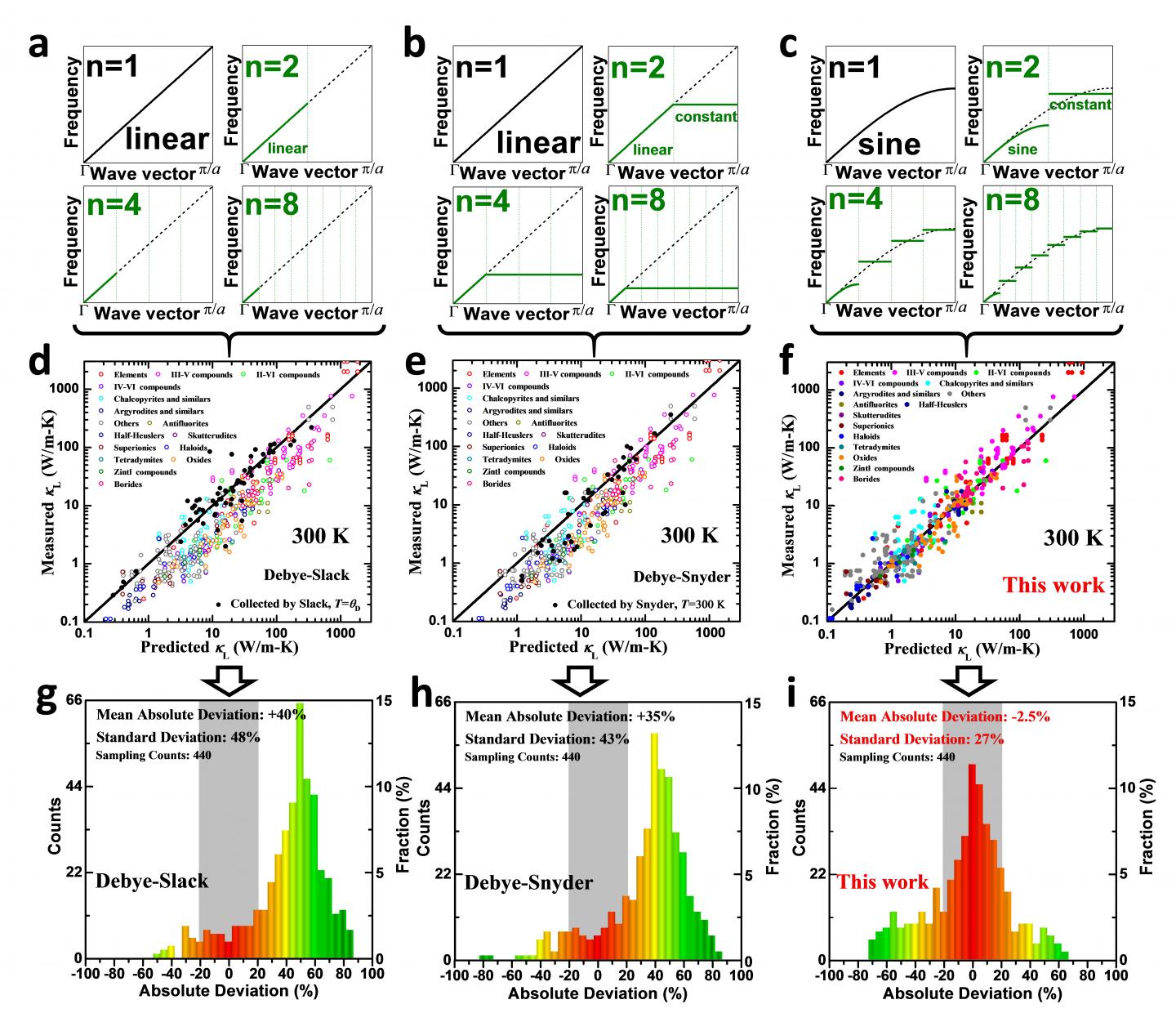 Comparison on phonon dispersion (a, b and c), measured lattice thermal conductivity versus prediction (d, e and f) and the corresponding error analyses (g, h and i) for Debye-Slack model (a, d and g), Debye-Snyder model (b, e and h) and the one developed in this work considering the periodic boundary condition (c, g and i) for crystalline solids.

Lattice thermal conductivity strongly affects the applications of materials related to thermal functionality, such as thermal management, thermal barrier coatings and thermoelectrics. In order to understand the lattice thermal conductivity more quantitatively and in a time- and cost-effective way, many researchers devoted their efforts and developed a few physical models using approximated phonon dispersions over the past century.

Most of these models use a linear phonon dispersion, proposed by Debye in 1912 based on an acoustic-elastic-wave assumption (Fig. 1a), while other models either involve fitting parameters on phonon dispersion or lack detailed equations for phonon transport properties. The linear phonon dispersion of Debye offers many simplifications on phonon transport properties, and was the most common approximation in the past century. The linear dispersion of Debye successfully predicts the T3 dependence of the heat capacity at very low temperatures and heat capacity approaches the Dulong-Petit limit at high temperatures. However, the nature of periodicity on atomic arrangements leads to a periodic boundary condition for lattice vibrations in solids (Fig. 1b), which actually creates lattice standing waves at Brillouin boundaries (Fig. 1c). This does not satisfy the acoustic-elastic-wave assumption of Debye, as proposed by Born and von Karman (BvK) in 1912–the same year that Debye proposed the linear dispersion.

This work takes into account the BvK boundary condition, and reveals that the product of acoustic and optical dispersions yields a sine function. In the case of which the mass (or the force constant) contrast between atoms is large, the acoustic dispersion tends to be a sine-function. This sine type dispersion indeed exists in both the simplest and the most complex materials. Approximating the acoustic dispersion to be sine, the BvK boundary condition subsequently reduces the remaining optical branches to be a series of localized modes with a series of constant frequencies. While first-principles calculations enable a more detailed phonon dispersion, a development of rationalized phonon dispersion for a time- and cost-effective prediction of phonon transport is significant due to the time-consuming and computationally expensive for first-principles calculations.