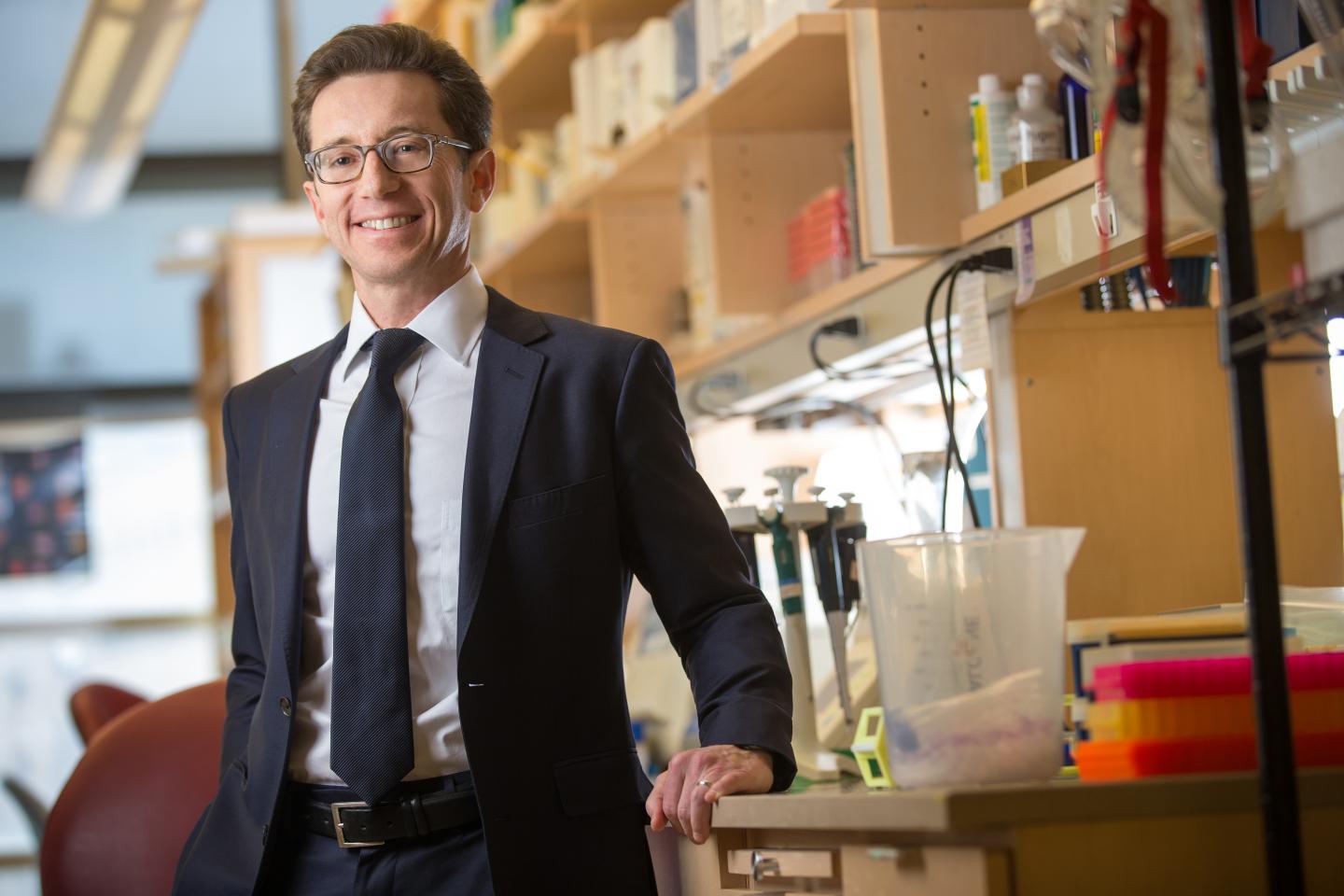 A team of researchers led by Jonathan Stamler, MD, of Case Western Reserve University School of Medicine and University Hospitals Cleveland Medical Center, has discovered a pathway for enhancing the self-repair efforts of injured kidneys. The finding may pave the way for new drugs to stop or even reverse the progression of serious kidney disease in humans — and other potentially lethal conditions of the heart, liver, and brain as well. Credit: Harrington Discovery Institute

A team of researchers led by Jonathan Stamler, MD, of Case Western Reserve University School of Medicine and University Hospitals Cleveland Medical Center, has discovered a pathway for enhancing the self-repair efforts of injured kidneys The finding may pave the way for new drugs to stop or even reverse the progression of serious kidney disease in humans–and other potentially lethal conditions of the heart, liver, and brain as well.

Kidneys filter waste and excess fluid from the blood, excreting the unsafe molecules in urine. As kidneys are injured or fail, waste builds up, potentially resulting in death.

The newly-discovered pathway involves reprogramming the body’s own metabolism in order to save damaged kidneys. Normally, a process called glycolysis converts glucose from food into energy, which is necessary for life to continue. But the new discovery shows that when tissue is injured, the body can switch the process in to one of repair to damaged cells.

Until now, the mechanisms by which the body switches between energy generation (for maximal performance) and repair (in injury) were poorly understood. Moreover, the body rarely maximizes the potential for repair, usually favoring energy production.

In the new findings, published online today and in the November 29th issue of Nature, the science team discovered how to intensify the switching process, resulting in a cascade of tissue-repair molecules that successfully stopped progression of kidney disease in mice.

“When injured, the body slows down use of sugar for energy, using it for repair instead,” said Stamler. “We show that we can control and amplify this process by shunting glucose away from energy generation into pathways that protect and repair cells. By giving a ‘lift and push’ to the body’s own self-healing we improve lifespan of injured animals. We can think of it as a blueprint for new lines of future therapy against injured and damaged tissue.”

Normally, when cells break down fat, sugars, and proteins into glucose, the three substances are converted into intermediate products that move into the mitochondria, the powerhouse of cells, providing fuel for life. Stamler’s team reports that things work very differently in injured tissues: in the kidneys for example, the body triggers a “Plan B,” converting the glucose into new molecules that carry out cell repair instead.

Stamler and colleagues found that a protein called PKM2 controls whether fuel (glucose) is used to power the cell or shift into repair mode. Disabling PKM2 resulted in a significant increase in cell-repair and a concomitant decrease in energy-generation. “After injury or disease, the body tries to disable the PKM2 protein in order to divert glucose into recovery mode. In our research, we amplified its inhibition. This resulted in significant protection against kidney injury in mice.”

A key molecule in the process is nitric oxide (NO). It was already known that NO protects kidneys and other tissue. NO is the active ingredient in nitroglycerine used for addressing heart disease so it was assumed that NO worked by dilating blood vessels. But the research team found that NO attached to a critical molecule called Co-enzyme A–known as a metabolite–linked to the glycolysis and energy production. Co-enzyme A binds to and transports NO into many different proteins, including PKM2, “turning them off.” This determines whether the kidney cells are using their pathways for energy or repair.

In addition to finding that adding NO to PKM2 activates repair, Stamler’s team found that a protein called AKR1A1 subsequently removes the NO from PKM2, re-activating a robust energy-generating process. This reversal, after healing is complete, allows glucose to be converted efficiently into fuel. “This helps explain why people regain the capacity to do strenuous activity after they recover from an injury or illness,” said Stamler. When the research team disabled AKR1A1, the kidneys remained in repair mode and were highly protected from disease.

Thirty million people–15 percent of the adult population–are estimated to have kidney disease in the United States. Causes include medical conditions such as high blood pressure and diabetes, as well as chemotherapy and dyes used in cardiac catherization.

Therefore, the goal is to develop drugs to inhibit PKM2 or AKR1A1. This could open up new healing possibilities for millions of people worldwide suffering from numerous conditions, injuries, and diseases, including heart disease, stroke, brain trauma and kidney disease.