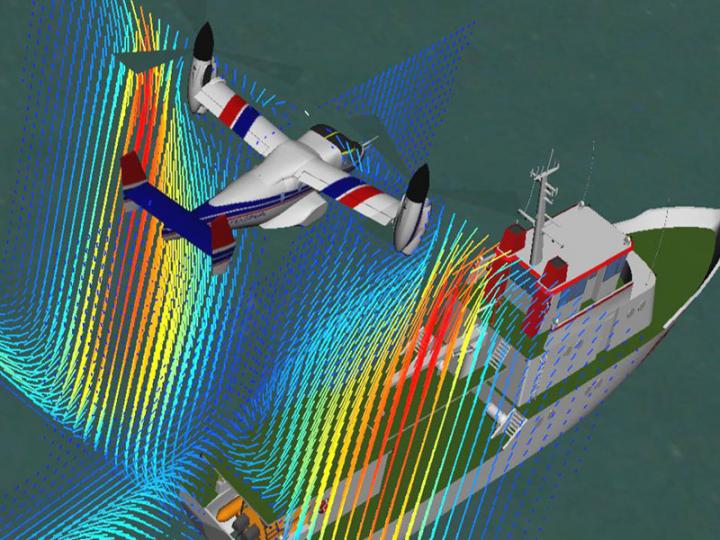 This is a simulation of a helicopter-landing on a ship. Source: Chair of Helicopter Technology / TUM

Missions at sea, in mountainous regions or close to skyscrapers are extremely risky for helicopter pilots. The turbulent air flows near oil rigs, ships, cliffs and tall buildings can throw a helicopter off balance and cause a crash. To provide pilots with optimal preparation for these challenging conditions, engineers at the Technical University of Munich (TUM) are developing new simulation software.

Providing helicopter pilots with the best possible preparation for extreme situations: That is the goal of the new simulation software being developed by researchers working at TUM's Chair of Helicopter Technology. For the first time, real-time computational analysis will be implemented for both fluid mechanics and flight dynamics. "Until now, flight simulators have not adequately reflected the reality of flying in close proximity to large objects," says Dr. Juergen Rauleder. "The problem is that, when it comes to wind conditions and the response of the helicopter, existing programs follow a rigid pattern. That means that local variations and changing conditions are not taken into account - unless the entire flow environment is known in advance."

But it is the unforeseen air flows that can be the most treacherous: For example, a moving ship causes air turbulence and sudden local shifts in wind speed known by specialists as "ship airwake flow". It changes continually through wave action and fluctuating inflow conditions. In addition, turbulence occurs near the deck, the bridge and other ship structures. As a helicopter approaches the ship, there is interference between these air currents and the flow produced by the rotors. Conditions near a mountain slope or next to high buildings are similarly complicated. In all of these cases, the helicopter's flight characteristics are influenced by complex and overlapping aerodynamic effects.

Stress for pilots and machines

Dealing with those situations takes a lot of skill and practice, both of which can currently be acquired only through on-the-job training. To become adept at landing on a ship in heavy seas, for example, a student pilot has to repeat this tricky situation dozens of times with an experienced flight instructor. That's the only way to gain the necessary experience to compensate for the complex interplay of air flows through perfectly timed adjustments to the pitch of the rotor blades.

"Conventional training is expensive, risky and very stressful for student pilots. It also imposes heavy demands on the aircraft: Because the first attempts usually result in rather hard landings, the dampers and landing gear take quite a beating," explains Rauleder.

Flow fields and flight dynamics all in one

His team has now developed a simulation program that combines flow mechanics and flight dynamics in real time: "The numerical model is extremely flexible and does not depend on stored flow data. We only have to enter the external conditions such as topography, global wind speeds and the helicopter type. During the simulation, our algorithms use that data to continuously compute the interacting flow field at the virtual helicopter's current location," the engineer explains.

The new program also lets pilots instantly "feel" the impact of the local air flows on the helicopter. This allows them to try out the effects of their control movements in a stress-free situation: perfect preparation for a soft landing that is easy on the aircraft. The potential of this method has attracted international interest, including from the U.S. Office of Naval Research, which is contributing funding under the auspices of its basic research program.

The TUM researchers have successfully validated the new real-time simulation with established reference models. All that is left to do is the biggest test of all: the reality check. To find out whether the virtual models actually reflect conditions at sea, the engineers are cooperating with researchers at the U.S. Naval Academy, the George Washington University and the University of Maryland.

The specialists in Washington have measured air flows on a ship using hundreds of sensors. To check the flight dynamics, the TUM team will also be using in-flight data collected by the German Aerospace Center (DLR). "The validation of the models and testing of our simulation environment by experienced pilots in our research simulator is enormously important for our developments," says Rauleder. "That's the only way we can ensure that the simulator training provides student pilots with optimal preparation for tough missions."