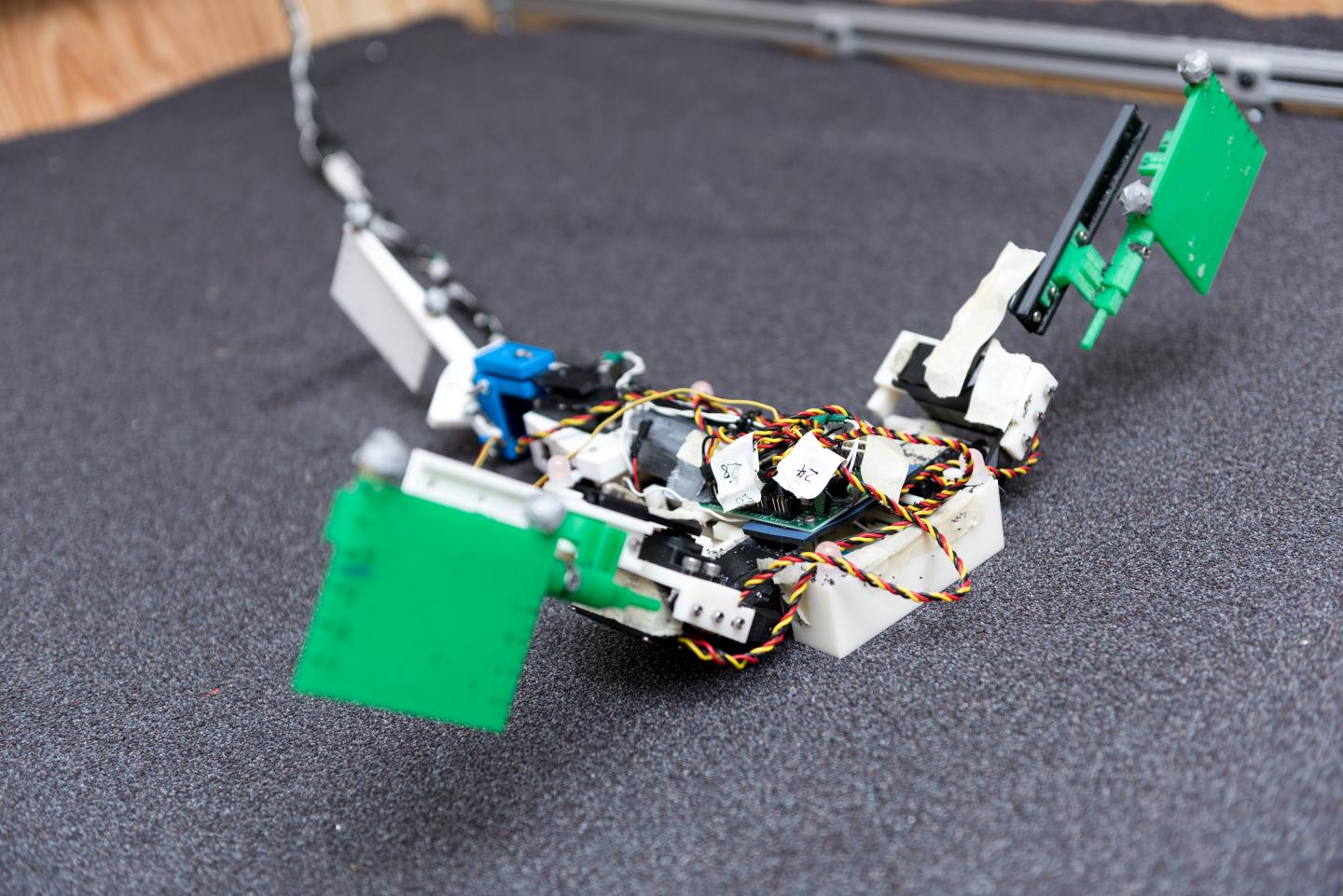 Could a tail have allowed ancient vertebrates to make the transition from water to land?

The study tested the hypothesis that coordinated tail movement played an important role in evolution of terrestrial vertebrates. The researchers found that, for the first critical step out of an aqueous environment and onto a riverbank or mudflat, stabilizing the body with a tail provided substantial benefits.

The effort, supported by the National Science Foundation (NSF), the Army Research Office and the Army Research Laboratory, brought together experts in physics, biology, robotics and mathematics who explored the question through a variety of experimental methods.

Daniel Goldman, an associate professor in the Georgia Tech School of Physics and the principal investigator on the NSF award that supported the work, says he has long been obsessed with the question of how the first creatures moved onto land.

“I was interested in evolutionary biology from a natural history perspective: imagining the grand scope of life on Earth and trying to understand how animals lived hundreds of millions of years ago and in this case, trying to understand how major transitions in behavior happened.” Goldman said. “For me this has been a nice integration of my interests applied to a question which I just think is fascinating: what did the earliest animals do when they were trying to crawl around on land?”

To answer the question, he and his collaborators took a three-pronged approach.

First, they explored the behavior and body mechanics of the African mudskipper — an amphibious fish that lives in tidal areas near shore and uses its front fins and tail to move on land with a “crutching” motion. The mudskipper is one of a handful of living organisms considered to be potentially close in body structure to the first terrestrial vertebrates.

In co-author Richard Blob’s lab at Clemson University, researchers recorded the movements of mudskippers in an environment akin to riverbanks where early land-dwellers may have emerged to see how they behaved.

“We found when mudskippers are using their tail on a sufficiently inclined sandy slope they do pretty well and when they don’t, they don’t do well,” Goldman said.

Next, the researchers developed a simplified, mudskipper-like version of a robot, which they call “MuddyBot,” on which they could systematically vary the angle and movements of the robot’s flipper-like limbs and tail. They used MuddyBot to find out which coordinated motions of limb and tail were most effective on granular surfaces of different inclines. They call this approach “robophysics” — a novel way to understanding the behavior of long-lost species.

Finally, they used a mathematical and engineering method called “geometric mechanics” (developed in the 1980s by physicist and Nobel Prize winner Frank Wilczek and his student Alfred Shapere) to analyze all the possible ways the MuddyBot can move in space and on different surfaces. This helps determine what types of movement may or may not have allowed the creature to pull itself up onto a sandy or muddy slope. This process also involved developing a better understanding of the physics of sand and the way that a granular medium can compress or slip when something tries to move on it.

The variety of approaches provided the teams with quantitative evidence to support the idea that the first locomotors may have had tails and may have used a crutching motion to move out of the water.

“Insight from these experiments led us to hypothesize that propulsive use of the tail, an appendage that has received relatively little attention in previous studies of the invasion of land, may have been the critical adaptation that allowed these early walkers to gain ground on challenging substrates,” says Benjamin McInroe, a co-author on the paper and then an Georgia Tech undergraduate (now a Ph.D. student at the University of California, Berkeley) who analyzed the mudskipper data provided by the Clemson team.

“Professor Goldman and his collaborators are combining physics and engineering prototyping approaches to understand the physical principles that allow animals to move in different environments,” said Krastan Blagoev, program director in the NSF Division of Physics. “This novel approach to living organisms promises to bring to biological sciences higher predictive power and at the same time uncover engineering principles that we have never imagined before.”

The team’s well-documented and analytic-rich findings only chart the critical first step out of the aqueous environment and not the full progression up a riverbank and onto level ground. After that first step, things get even more complicated because sand flows in a way that scientists don’t yet have the physics to describe.

“Even this ridiculously seemingly simple little crutching motion with coordinated tail use confronts our ignorance in three or four different disciplines: biology, paleontology, robotics, and mathematics,” said Goldman. “That’s a summary of how far away we are from really understanding it.”

Instead of being discouraged by this fact, the realization motivates Goldman.

“That’s the great joy in all this,” he says. “Just looking at these simple problems, there’s a huge amount of insight to be had from applying new tools.”

The research provides a rigorous approach to studying evolutionary questions in the future by combining animal, robotic and mathematical approaches. It even may improve designs for robots that can move on sand or loose dirt and help in search and rescue missions — a focus of Howie Choset’s work at Carnegie Mellon University.

“Our computer modeling tools allow us to visualize, and therefore better understand, how the mudskipper incorporates its tail and flipper motions to locomote,” says Howie Choset, a professor in the Robotics Institute at Carnegie Mellon University. “This work also will advance robotics in those cases where a robot needs to surmount challenging terrains with various inclinations.”

It is impossible to say for sure yet if the earliest locomotors used a crutching behavior like the mudskipper, Goldman says. For that reason, the team is now making robots to test some alternative possibilities, including robots with bodies like salamanders that move with a diagonal gait.

“It really is exciting to imagine that some of these models that we’re cooking up in the lab in these relatively simple robots could have anything to say about something that happened 360 million years ago,” he says, “and to be able to demonstrate that these questions, which seem so simple on first blush, actually require deep insights into the fundamentals of all sorts of disciplines including physics, biology and robotics.”