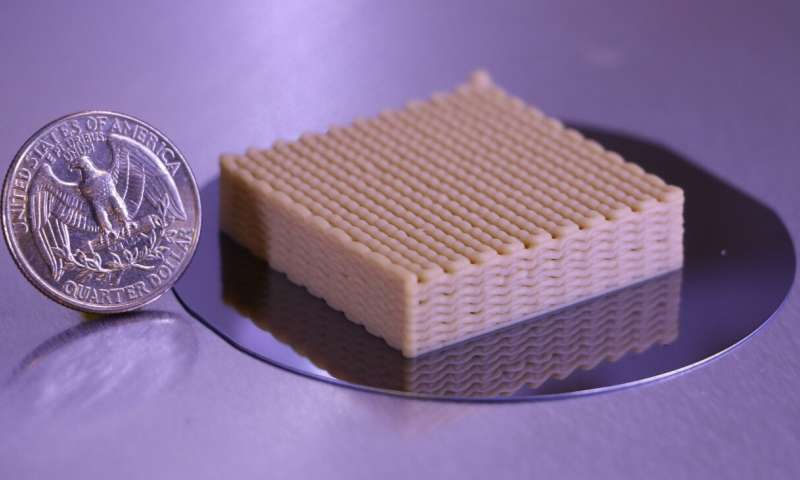 A research team from the U.S. Department of Energy’s Lawrence Livermore National Laboratory (LLNL) was able to use the new ink to 3D print live cells that are able to convert glucose to ethanol and carbon dioxide gas (CO₂), which increases catalytic efficiency.

“This is the first demonstration for 3D printing immobilized live cells to create chemical reactors,” engineer Eric Duoss, a co-author on the paper, said in a statement. “This approach promises to make ethanol production faster, cheaper, cleaner and more efficient. Now we are extending the concept by exploring other reactions, including combining printed microbes with more traditional chemical reactors to create ‘hybrid’ or ‘tandem’ systems that unlock new possibilities.”

In the study, the researchers freeze-dried live Saccharomyces cerevisiae—biocatalytic yeast cells—into porous 3D structures, allowing the cells to convert the glucose to ethanol and CO₂ efficiently.

“Compared to bulk film counterparts, printed lattices with thin filament and macro-pores allowed us to achieve rapid mass-transfer leading to several-fold increase in ethanol production,” LLNL materials scientist Fang Qian, the lead and corresponding author on the paper, said in a statement. “Our ink system can be applied to a variety of other catalytic microbes to address broad application needs.

“The bioprinted 3D geometries developed in this work could serve as a versatile platform for process intensiﬁcation of an array of bioconversion processes using diverse microbial biocatalysts for production of high-value products or bioremediation applications,” she added.

The researchers also found that if genetically modified yeast cells are used, they could produce highly valuable pharmaceuticals, chemicals, food and biofuels.

In the past, researchers have proven that living mammalian cells bioprinted into complex 3D scaffolds could be used for a number of applications, including tissue regeneration, drug discovery and clinical implementation.

Currently, the common industrial practice is to use microbes to convert carbon sources into chemicals that have use in the food industry, biofuel production, waste treatment and bioremediation. Rather than using inorganic catalysts, live microbes have several advantages including mild reaction conditions, self-regeneration, low cost and catalytic specificity.

“There are several benefits to immobilizing biocatalysts, including allowing continuous conversion processes and simplifying product purification,” chemist Sarah Baker, a corresponding author on the paper, said in a statement. “This technology gives control over cell density, placement and structure in a living material.

“The ability to tune these properties can be used to improve production rates and yields. Furthermore, materials containing such high cell densities may take on new, unexplored beneficial properties because the cells comprise a large fraction of the materials.”