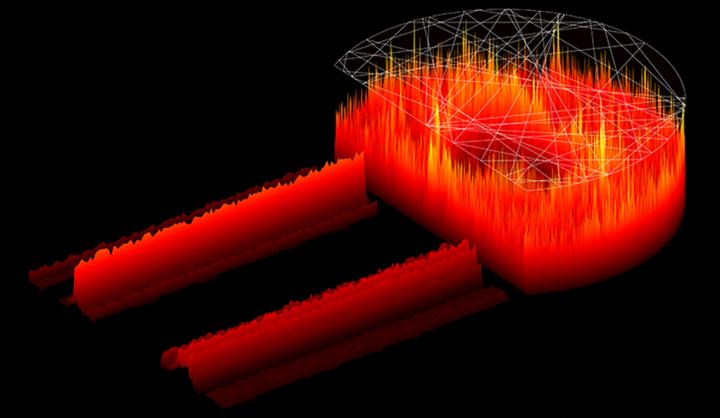 In high-powered lasers, which are used in materials processing, large-scale displays, laser surgery and LiDar (a form of radar that uses lasers), laser instabilities often occur that limit their usage. This instability poses no problems for simple applications such as laser pointers, but becomes a serious issue for lasers operating at high power.

The scientists have developed a unique D-shaped laser that is able to regulate the light emission patterns and eliminate such laser instabilities to potentially reduce the degree of fluctuations in the laser output.

The team’s findings were published online yesterday in Science.

To suppress the instability, the international research team decided to fight fire with fire. NTU Associate Professor Wang Qijie, who was part of the NTU team involved in the international research, explained, “Traditional lasers emit fluctuations in light waves that limit their usefulness. To prevent them from forming, we created an irregular-shaped laser cavity that causes light to bounce off the walls of the cavity in an unpredictable manner that however results in a stable light stream. It’s like using chaos to deal with chaos.”

The research was done on a semiconductor laser that can be found in devices such as barcode scanners and laser printers, but the joint research team believes their findings could be extended to other types of high-powered lasers, including gas lasers and solid-state lasers.

Most traditional laser devices take on a cuboid shape, with mirrors placed parallel to each other on both ends to allow light to bounce back and forth between the mirrors.

This seemingly uniform bouncing however leads to laser instability, especially in high-powered lasers, creating irregular peaks and troughs as light is emitted from the laser. These varying peaks could deteriorate the formation of images. (See Annex for a video on laser instability produced by a conventional laser)

Yale professor Hui Cao, the principal investigator who led the international study, said previous strategies to reduce such interference have usually involved reducing the power of the laser. “As a result, none of the previous approaches are scalable to the power levels required for practical applications,” said the Frederick W. Beinecke Professor of Applied Physics at Yale. Professor Ortwin Hess, Co-Director of the Centre for Plasmonics and Metamaterials in Imperial College London, is the other principal investigator of the study.

To tackle this “chaos”, Prof Wang led Zeng Yongquan and Hu Xiaonan, his two PhD students at the time, to build a D-shaped laser cavity. The NTU researchers joined the international research team two years ago.

Inside the D-shaped laser device, light is forced to bounce off mirrors along the irregular shape walls, making it travel in a disorderly manner. However, this seemingly chaotic method results in a stable pattern of light emission. (See Annex for a video of how the new D-shaped laser tackles laser instability)

Assoc Prof Wang said imaging applications such as next generation high-tech microscopes, laser projectors and biomedical imagery are the end goal for the joint research team.

“We have found that a D-shaped laser cavity is easy to fabricate, and is effective in significantly reducing the problematic laser instabilities. Our next step will be to find out if there are other cavity shapes that could make the laser more efficient,” he said.