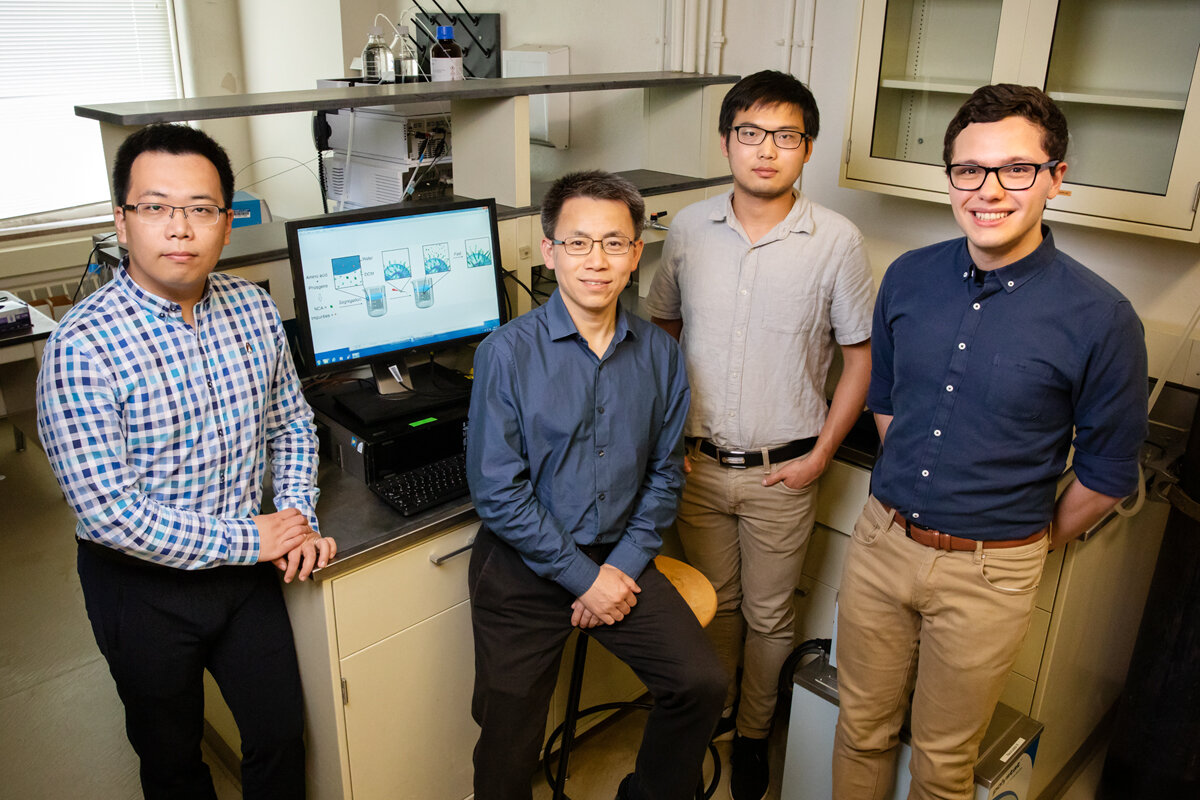 From left, postdoctoral researcher Ziyuan Song, professor Jianjun Cheng and graduate students Tianrui Xue and Lazaro Pacheco, developed a new method that streamlines the construction of amino acid building blocks that can be used in a multitude of industrial and pharmaceutical applications. Credit: L. Brian Stauffer

The process of chaining together the amino acids needed to build the new protein molecules for drug and biomaterial development is often very long and complex for scientists.

However, a research team from the University of Illinois at Urbana-Champaign has created a faster, easier and cheaper technique to produce new amino acid chains called polypeptides, using a streamlined process to purify amino acid precursors while simultaneously building the chains.

Enzymes called ribozymes join amino acids in biological cells to form proteins in a process that requires water, salt and several other molecules to complete. This process is extremely difficult to duplicate in the lab, requiring researchers to use purified N-carboxyanhydride (NCA) molecules as a precursor to build polypeptide chains without water or impurities, which induce monomer degradations and chain terminations.

In the new system, the researchers mimicked the function of ribozyme to build chains, and at the same time they removed any other molecules that could potentially contaminate the system, enabling them to build polypeptide chains without using pure NCAs.

“I worked on NCA purification for several years and found it very painful, because the process required water-free conditions and was technically challenging,” postdoctoral researcher Ziyuan Song said in a statement. “That’s why there aren’t many research groups working in this field. With this method, we can get more people to join and find more applications.”

The researchers used a water/dichloromethane biphasic system with macroinitiators anchored at the interface and extracted the impurities into the aqueous phase in situ, where the localized macroinitiators allow for NCA polymerization at a rate which outpaces water-induced side reactions.

The new process is seen as a major advancement from previous methods to produce polypeptides with separate, laborious and time-consuming processes that often require clean rooms and essential starting materials that minimize side reactions.  Synthesizing and purifying NCAs could take several days. Then in a separate process, building the actual polypeptide chains can take anywhere from several hours to multiple days.

“The field has never grown big, in part because synthesizing polypeptides is so complicated,” University of Illinois materials science and engineering professor Jianjun Cheng, who led the new research, said in a statement. “NCA has a lot of impurities that are difficult to remove. Until now, the synthesis of high-quality polypeptides required ultrapure NCAs.”

The researchers see their new technique being particularly useful in chemistry, biology and industrial applications, where protein chains can be used to assemble useful molecules.

“Previously, the field required specialized chemists like us to make these building blocks,” Cheng said. “Our new protocol allows anyone with basic chemistry skills to build the desired polypeptides in a few hours.”

The researchers now plan to scale up their process and examine more chemical and biological applications possible with their synthetic process.