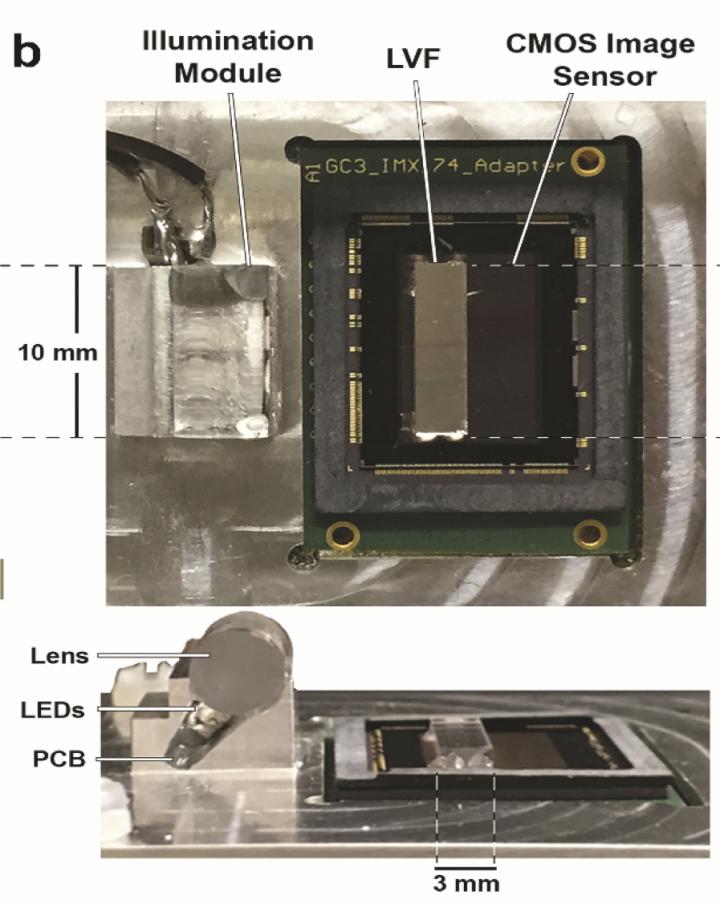 Top view and side view of the compact spectrometer for the smartphone science camera, comprised of an image sensor chip with a linear variable filter attached over the surface. Source: Micro and Nanotechnology Lab, University of Illinois at Urbana-Champaign

The latest versions of most smartphones contain at least two and sometimes three built-in cameras. Researchers at the University of Illinois would like to sell mobile device manufactures on the idea of adding yet another image sensor as a built-in capability for health diagnostic, environmental monitoring, and general-purpose color sensing applications.

Three years ago, the National Science Foundation provided a pair of University of Illinois professors with a grant to develop technology called “Lab-in-a-Smartphone.” Over that time, the research teams of Brian Cunningham, Donald Biggar Willett Professor of Engineering, and John Dallesasse, associate professor of electrical and computer engineering, have published papers detailing potential ways the mobile devices could provide health diagnostic tests and other measurements normally performed in a laboratory setting.

Their latest efforts demonstrate that mobile devices incorporating their sensor can provide accurate measurements of optical absorption spectra of colored liquids or the optically scattered spectra of solid objects. In other words, a mobile device incorporating the lab-in-a-smartphone “science camera” could accurately read liquid-based or paper-based medical tests in which the end result is a material that changes from one color to another in the presence of a specific analyte.

The team successfully demonstrated a very compact inexpensive system that performs optical spectroscopy in a form factor that can fit inside the body of a phone. It uses inexpensive components and the same kind of LEDs being used for flash illumination in phones. By adding a special component attached on top of a conventional smartphone image sensor, they were able to measure the light absorption of liquids, and the scattering spectrum of solids.

“We have had several projects where we looked to use the sensing capabilities of smartphones and mobile devices for point-of-use biomedical tests or tests that could be performed away from the laboratory,” Cunningham explained. “But in all the projects that we’ve worked on so far, there has been a cradle or some instrument that the phone has to be in contact with to perform the measurement.”

However, their latest paper, “Integrated spectroscopic analysis system with low vertical height for measuring liquid or solid assays” published in Sensors and Actuators B details how a smartphone could directly be placed over a cartridge containing the liquid to measure the specific color of the liquid. The results could then be directly sent electronically to a physician, who could make a diagnosis and suggest a remedy without a patient needing to see that physician in person.

“To make it work, smartphone manufacturers would add a camera for science purposes,” Cunningham said. “The pixels of the additional image sensor would have a linear variable filter glued on top of it that transforms the camera into a spectrometer. Since the component would be an integral part of the phone, the information generated by it can be seamlessly integrated with other information about the patient, and the test being performed, while interacting with a cloud-based smart service system that provides immediate actionable feedback.”

To prove the concept, they accurately measured the liquids of a fetal fibronectin enzyme-linked immunosorbent assay (ELISA), a protein whose concentration is used to help determine the likelihood a pregnant woman would give birth prematurely. Kenny Long, an MD/PhD student in bioengineering, whose research has focused on clinical application of medical technologies, led that effort.

“Without our approach, it is possible to roughly measure the color of an object using the red, green and blue pixel intensities in a smartphone image,” Cunningham said. “However, you get more rich information when you measure the whole spectrum and can extend the detected wavelengths into the infrared.”

More specifically, this technology uses illumination from a bank of light emitting diodes (LEDs), which is gathered into a cylindrical plastic rod. The rod collimates the light and sends it to a test point in front of the camera. The system allows only one wavelength to pass through to the camera at a time, but the selected wavelength is linearly variable across the width of the camera. The component used in the system, called a Linear Variable Filter (LVF), looks like a ~2×8 mm2 thin piece of glass that is glued on top of the camera’s pixels, so it performs wavelength separation without using vertical space, like conventional spectrometers do.

“We developed an LVF spectrometer by simply gluing the filter component over the pixels of a conventional image sensor,” said Cunningham. “It is a wavelength transmission filter that is graded from the left side to the right side, to allow blue light through on the left and red light through on the right, and every other wavelength in between. If you shine one wavelength through the entire filter, light will only pass through to the image sensor at one location. When many wavelengths pass through at one time, the image sensor’s pixel intensities represent a spectrum of the light”

The technology has specific impact on developing countries or rural areas, where getting to a doctor’s office is can be challenging. The same methodology demonstrated in the paper can be applied to quantitatively detecting biomarkers for nutrition, cardiac health, sepsis, cancer, pregnancy, infectious disease, drugs of abuse, hormones, and many others.

Cunningham has had several conversations with smartphone manufacturers on his discoveries over the past few years and understands that to convince them to add yet another camera to a phone, there must be compelling consumer applications. To that end, their publication shows that the component can measure the spectrum of light scattered off solid surfaces, to observe subtle differences, using colored paper and pH test strips as representative examples.

“In addition to measuring health diagnostic tests, the sensor could measure all sorts of fun things too,” Cunningham said. “For instance, it could be used to measure the color of everyday objects, such as your shirt or for matching the color of the sky to the paint color in your living room. It would be very useful for graphic artists, photographers, architects, and citizen scientists.”

Fundamentally, though, he is hoping to take advantage of a landscape where phone companies are already thinking about using their devices for mobile health.

“I think mobile health is going to mean medical diagnostic tests for nutrition or wellness, a service that the major smartphone companies can help provide,” Cunningham said. “They are looking for ways that healthcare can fold in with their capabilities. We’re hoping to find companies that are interested in differentiating their phone from others by having this capability.”