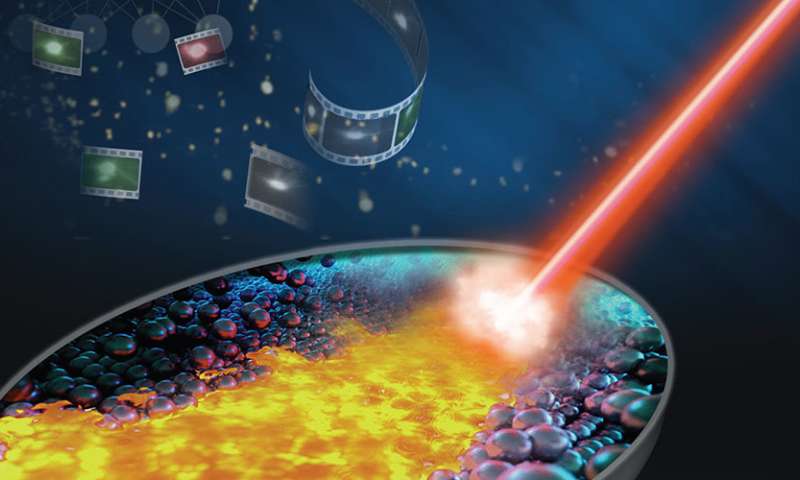 Lawrence Livermore National Laboratory researchers have developed machine learning algorithms capable of processing the data obtained during metal 3D printing in real time and detecting within milliseconds whether a 3D part will be of satisfactory quality. Credit: Jeannette Yusko and Ryan Chen/LLNL

For years, Lawrence Livermore National Laboratory engineers and scientists have used an array of sensors and imaging techniques to analyze the physics and processes behind metal 3-D printing in an ongoing effort to build higher quality metal parts the first time, every time. Now, researchers are exploring machine learning to process the data obtained during 3-D builds in real time, detecting within milliseconds whether a build will be of satisfactory quality.

In a paper published online Sept. 5 by Advanced Materials Technologies , a team of Lab researchers report developing convolutional neural networks (CNNs), a popular type of algorithm primarily used to process images and videos, to predict whether a part will be good by looking at as little as 10 milliseconds of video.

“This is a revolutionary way to look at the data that you can label video by video, or better yet, frame by frame,” said principal investigator and LLNL researcher Brian Giera. “The advantage is that you can collect video while you’re printing something and ultimately make conclusions as you’re printing it. A lot of people can collect this data, but they don’t know what to do with it on the fly, and this work is a step in that direction.”

Often, Giera explained, sensor analysis done post-build is expensive and part quality can be determined only long after. With parts that take days to weeks to print, CNNs could prove valuable for understanding the print process, learning the quality of the part sooner and correcting or adjusting the build in real time if necessary.

LLNL researchers developed the neural networks using about 2,000 video clips of melted laser tracks under varying conditions, such as speed or power. They scanned the part surfaces with a tool that generated 3-D height maps, using that information to train the algorithms to analyze sections of video frames (each area called a convolution). The process would be too difficult and time-consuming for a human to do manually, Giera explained.

University of California, Berkeley student and LLNL researcher Bodi Yuan, the paper’s lead author, developed the algorithms that could label automatically the height maps of each build and used the same model to predict the width of the build track, whether the track was broken and the standard deviation of width. Using the algorithms, researchers were able to take video of in-progress builds and determine if the part exhibited acceptable quality. Researchers reported that the neural networks were able to detect whether a part would be continuous with 93 percent accuracy, making other strong predictions on part width.

“Because convolutional neural networks show great performance on image and video recognition-related tasks, we chose to use them to address our problem,” Yuan said. “The key to our success is that CNNs can learn lots of useful features of videos during the training by itself. We only need to feed a huge amount of data to train it and make sure it learns well.”

Paper co-author and LLNL researcher Ibo Matthews leads a group that has spent years collecting various forms of real-time data on the laser powder-bed fusion metal 3-D-printing process, including video, optical tomography and acoustic sensors. While working with Matthews’ group to analyze build tracks, Giera concluded it wouldn’t be possible to do all the data analysis manually and wanted to see if neural networks could simplify the work.

“We were collecting video anyway, so we just connected the dots,” Giera said. “Just like the human brain uses vision and other senses to navigate the world, machine learning algorithms can use all that sensor data to navigate the 3-D printing process.”

The neural networks described in the paper could theoretically be used in other 3-D printing systems, Giera said. Other researchers should be able to follow the same formula, creating parts under different conditions, collecting video and scanning them with a height map to generate a labeled video set that could be used with standard machine-learning techniques.

Giera said work still needs to be done to detect voids within parts that can’t be predicted with height map scans but could be measured using ex situ X-ray radiography.

Researchers also will be looking to create algorithms to incorporate multiple sensing modalities besides image and video.

“Right now, any type of detection is considered a huge win. If we can fix it on the fly, that is the greater end goal,” Giera said. “Given the volumes of data we’re collecting that machine learning algorithms are designed to handle, machine learning is going to play a central role in creating parts right the first time.”