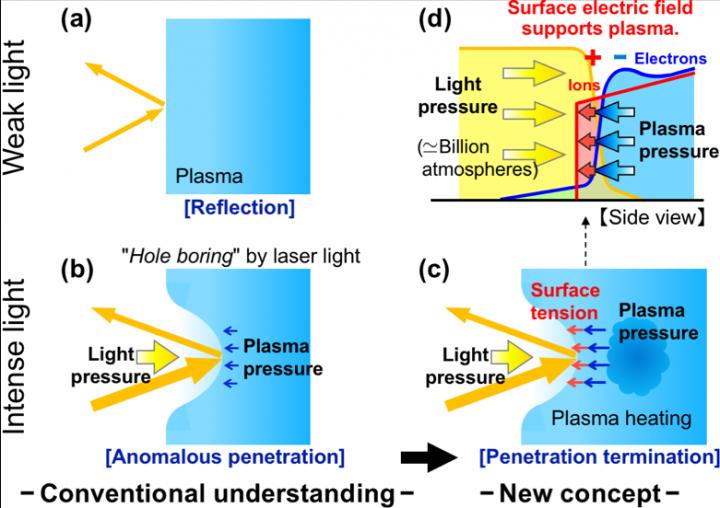 The interaction of high-power laser light sources with matter has given rise to numerous applications including; fast ion acceleration; intense X-ray, gamma-ray, positron and neutron generation; and fast-ignition-based laser fusion. These applications require an understanding of energy absorption and momentum transfer from the high-intensity lasers to plasma particles.

A group of Japanese researchers led by Osaka University has proposed that substances heated with high-power lasers produce an ultrahigh pressure plasma state, comparable with those found at the centers of stars, and that the surface tension of the plasma can push back light. Since lasers with energies capable of heating material sufficiently to create this pressure had not been available to date, the process had not been considered. Their work published in Nature Communications describes their theory and supporting simulations.

They derived the limit density for laser hole boring, which corresponds to the maximum plasma density laser light can reach. They found that after reaching the density limit, the surface plasma starts to blowout towards the laser, even if the laser irradiates the plasma continuously.

The researchers’ theory explains the transition to blowout in terms of a balance relationship between the pressure of the laser light and that of the surface plasma. The theory provides a guideline in controlling electron energy which is important for applications such as ion acceleration and pair plasma creation.

“We also derived the time scale for the transition from hole boring to blowout, showing that our findings will be applicable for multi-picosecond laser experiments,” lead author Natsumi Iwata says. “We hope our work will provide a grounding for application focused research, for example laser initiated nuclear fusion.”