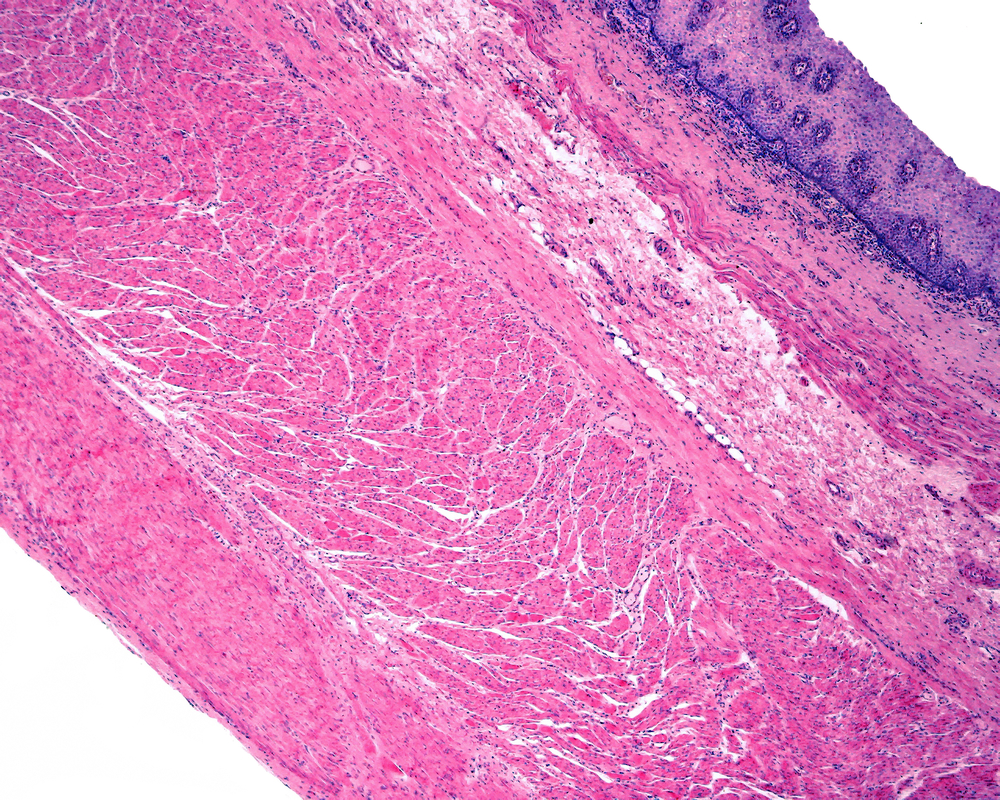 A new treatment method may someday allow patients with long-gap esophageal atresia—a rare birth defect in which part of the esophagus is missing— a to receive treatment without interrupting their everyday lives. Researchers from the Boston Children’s Hospital have developed an implanted and programmable medical robot that can gradually lengthen tubular organs by applying traction forces—stimulating tissue growth in stunted organs without interfering with organ function or causing apparent discomfort.

The motorized device—which is covered by a smooth biocompatible, waterproof skin—is attached with two attachment rings only to the esophagus and sewn into place with sutures to allow a patient to move freely.

A programmable control unit outside the body applies adjustable traction forces to the rings, slowly and steadily pulling the tissue in the desired direction.

The researchers tested the device on the esophagi of pigs, where the distance between the two rings was increased by small, 2.5-millimeter increments each day for eight to nine days.

The pigs showed no signs of discomfort and were able to eat normally with the device applying traction to its esophagus.

On the tenth day, the segment of esophagus had increased in length by 77 percent on average. Further examination showed a proliferation of cells, while the organ also maintained its normal diameter.

“This shows we didn’t simply stretch the esophagus—it lengthened through cell growth,” Pierre Dupont, Ph.D., the study’s senior investigator and Chief of Pediatric Cardiac Bioengineering at Boston Children’s, said in a statement.

Long-gap esophageal atresia is currently treated with an operation that uses sutures anchored on the patient’s back to gradually pull on the esophagus.

However, patients must be paralyzed in a medically induced coma and placed on mechanical ventilation in the intensive care unit for one to four weeks to prevent the esophagus from tearing.

The long period of immobilization can also cause medical complications, such as bone fractures and blood clots.

“This project demonstrates proof-of-concept that miniature robots can induce organ growth inside a living being for repair or replacement, while avoiding the sedation and paralysis currently required for the most difficult cases of esophageal atresia,” Dr. Russell Jennings, the surgical director of the Esophageal and Airway Treatment Center at Boston Children’s Hospital, and a co-investigator on the study, said in a statement. “The potential uses of such robots are yet to be fully explored, but they will certainly be applied to many organs in the near future.”

The next step will be to test the robotic system in a larger animal model of short bowel syndrome, which is much more common than long-gap esophageal atresia. Short bowel can be caused by necrotizing enterocolitis in the newborn, Crohn’s disease in adults, or a serious infection or cancer requiring a large segment of intestine to be removed.

“Short bowel syndrome is a devastating illness requiring patients to be fed intravenously,” Dr. Peter Ngo, a co-author on the study, said in a statement. “This, in turn, can lead to liver failure, sometimes requiring a liver or multivisceral [liver-intestine] transplant, outcomes that are both devastating and costly.”

I think we need to be specific you wouldn’t use this device to treat any esophagus issue, it is for this specific rare condition and other tubular growth-related conditions.