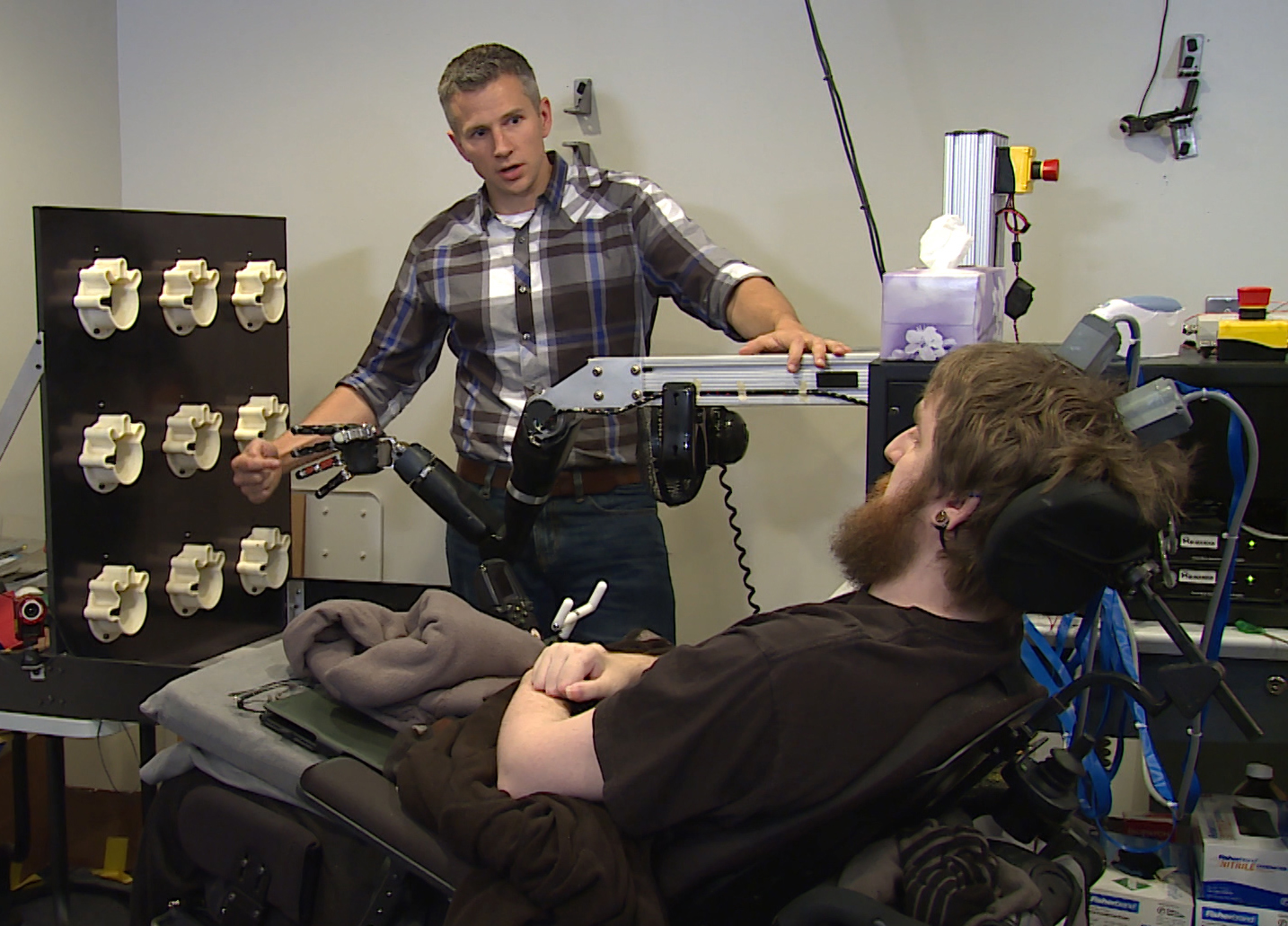 However, thanks to a robotic arm controlled by his brain, Copeland was recently able to feel a tingling sensation in his fingers last spring that eventually led to a hand shake and fist bump with Obama during The White House Frontiers Conference in Pittsburgh on Oct. 13.

Last spring Copeland, 28, underwent brain surgery and was connected to the Brain Computer Interface (BCI), developed by the University of Pittsburgh and the University of Pittsburgh Medical Center (UPMC). This technology for the first time in humans allow paralyzed individuals like Copeland to experience the sensation of touch through a robotic arm controlled by the brain.

“I can feel just about every finger—it’s a really weird sensation,” Copeland said in a statement about a month after surgery. “Sometimes it feels electrical and sometimes its pressure, but for the most part, I can tell most of the fingers with definite precision. It feels like my fingers are getting touched or pushed.”

During the surgery, four tiny microlectrode arrays, which are each about half the size of a shirt button, were implanted into Copeland’s brain. Imaging techniques were used to identify the exact region of the brain that correspond to feeling in each of the fingers and palm.

Using the BCI, Copeland is currently able to feel pressure and distinguish intensity to some extent. However, according to study co-investigator and UPMC neurosurgeon Elizabeth Tyler-Kabara, M.D. Ph.D., assistant professor, Department of Neurological Surgery, Pitt School of Medicine, he is still unable to differentiate between hot and cold substances.

In a study published in Science Translational Medicine, study co-author Andrew Schwartz, Ph.D., distinguished professor of neurobiology and chair in systems neuroscience, Pitt School of Medicine, and a member of the University of Pittsburgh Brain Institute, explained the significance of the study.

“The most important result in this study is that microstimulation of sensory cortex can elicit natural sensation instead of tingling,” he said. “This stimulation is safe, and the evoked sensations are stable over months.”

“There is still a lot of research that needs to be carried out to better understand the stimulation patterns needed to help patients make better movements,” continued Schwartz.

The breakthrough is a culmination of several years of work for researchers at the two institutes of higher learning. Four years ago, Jan Scheuermann, who has quadriplegia caused by a degenerative disease, was able to feed herself chocolate using the mind-controlled robotic arm.

As the research team was looking for the right candidate to test the expanding BCI technology further, they were able to develop and refine the system so inputs from the robotic arm can be transmitted through a microlectrode array implemented in the brain where the neurons that control hand movement and touch are located.

The microelectrode array and its control system were developed by Blackrock Microsystems and the robotic arm was built by Johns Hopkins University’s Applied Physics Lab.