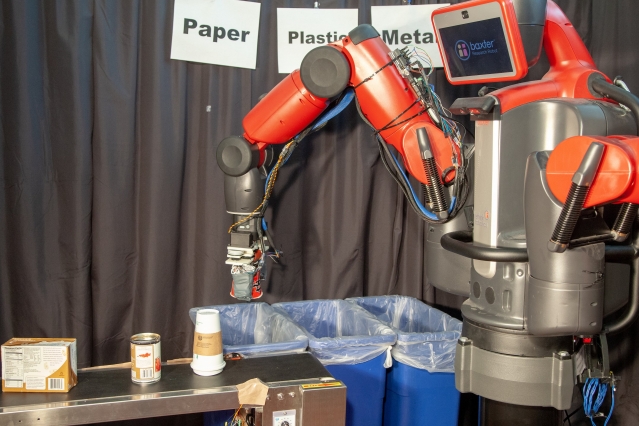 RoCycle can detect if an object is paper, metal, or plastic. CSAIL researchers say that such a system could potentially help enable the convenience of single-stream recycling with lower contamination rates that confirm to China’s new recycling standards. Photo: Jason Dorfman

While single stream recycling is convenient for consumers, it has become a burden for recycling companies, as employees have to sift through piles of recycled items to determine what is plastic, paper or metal.

This process includes newspapers, plastic bottles and other recycled items moving quickly through a conveyor belt where human workers will manually sort them into individual piles. For recycling companies, this process is costly and can be unsafe for the workers.

Researchers from the Massachusetts Institute of Technology (MIT) and Yale University have created RoCycle, a soft robotic system that is comprised of a soft Teflon hand with tactile sensors on its fingertips that enable it to detect an object’s size and stiffness and ultimately decipher whether it is made of plastic, paper or metal.

“The motivation behind RoCycle was that we saw these recycling plants and they still require a large amount of manual labor,” PhD student Lillian Chin, lead author on the new paper, said in an exclusive interview with R&D Magazine. “Even though there are automated systems that do exist, humans are still really good at reaching into these systems, pulling out the relevant items and then sorting it. The thing that really drives that is the sense of touch. Visual helps you see where the items are and what’s relevant, but it really comes down to you grab the object, you feel what it is then you have a sense of what material it’s made out of so you can sort it easily.”

RoCycle sensorized skin provides haptic feedback, allowing it to differentiate between a wide range of different materials. Chin explained why they opted for a soft robot, rather than a traditional hard robot made out of metal or steel.

“In order to make a robot be able to do this and go into potentially hazardous environments and be able to sense we decided to go through soft robotics,” she said. “Most soft robots are pneumatic driven susceptible to puncture. What RoCycle is, is a soft robotic hand that is motor driven, so there is no airlines anywhere, and has a sense of touch through strain and pressure sensors.”

The researchers used a new material called handed shearing auxetics for the robots hands that become wider when stretched and when cut, twist to either the left or right.  RoCycle’s auxetic for each of the hand’s two large fingers make them interlock and oppose each other’s rotation to enable more dynamic movement.

The robot’s gripper also uses its strain sensor to estimate an object’s size. It then uses two pressure sensors to measure the force needed to grasp an object, allowing the robot to decipher what a material is made from. The sensors can currently detect the radius of an object within 30 percent accuracy and tell the different between hard and soft objects with 78 percent accuracy.

RoCycle, which is compatible with virtually any robotic arm, was 85 percent accurate at detecting materials when stationary in testing and 63 percent accurate on an actual simulated conveyer belt. The researchers found that the most common error for RoCycle was it identified paper-covered metal tins as paper, something the researchers believe can be corrected with more sensors added along the contact surface.

However, in one test  RoCycle was able to correctly detect that a Starbucks coffee cup was actually made out of plastic from one that was made out of paper.

Before RoCycle can be implemented on a wide scale, Chin said the team is planning to make a number of improvements, including coupling the sensors more tightly with more sensor resolution and incorporating a vision system.

Chin explained that creating a vision system for the robot would allow it to pick out and grab objects in a pile, rather than having to design a planned trajectory.

She also said that outside of helping out recycling plants, RoCycle might also have applications in agriculture testing the ripeness of produce and in healthcare, detecting abnormal lumps on patient’s bodies.

The researchers recently presented the new technology at the IEEE International Conference on Soft Robotics (RoboSoft) in Seoul, South Korea from April 14-18.