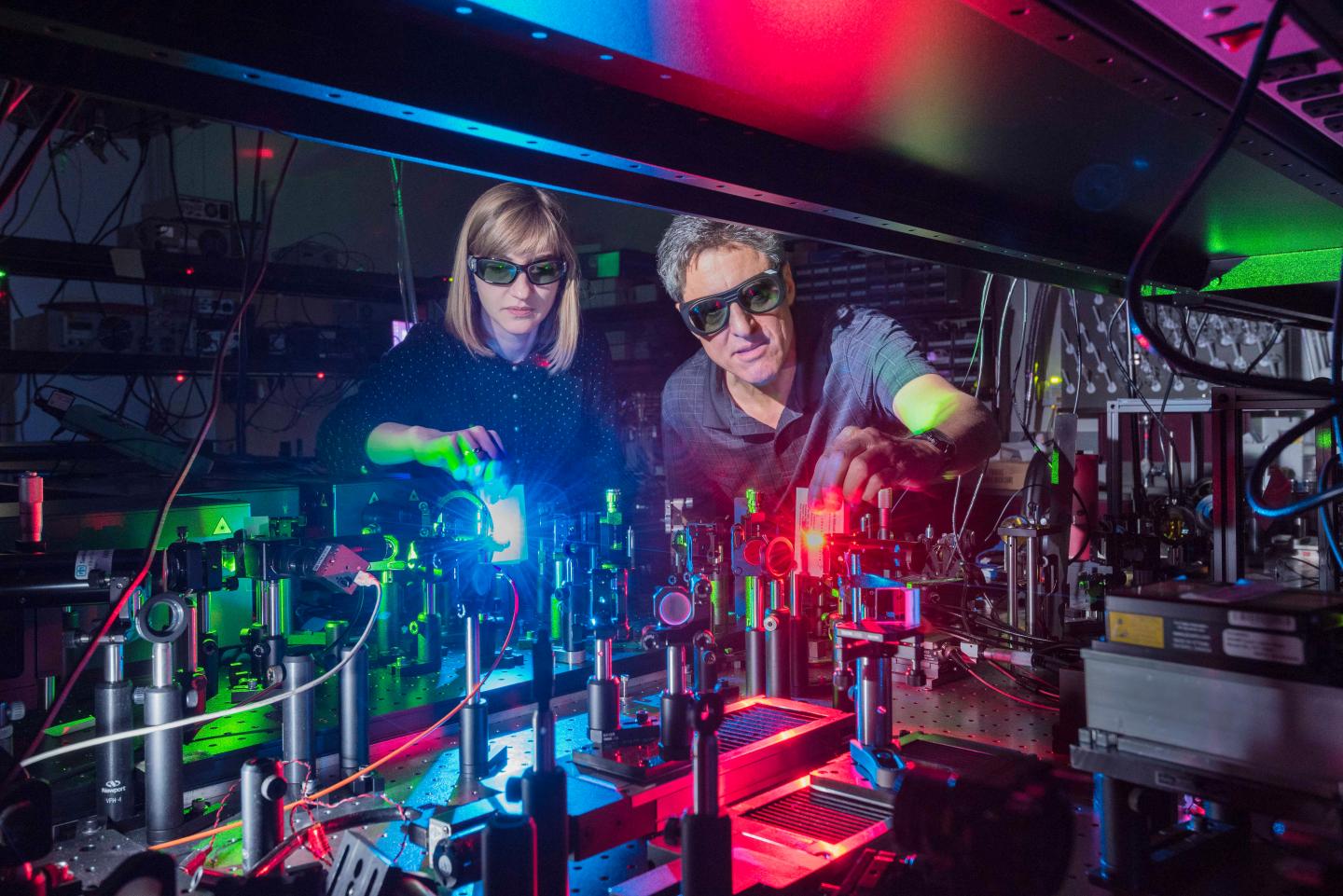 Sandia National Laboratories postdoctoral appointee Polina Vabishchevich, left; and Senior Scientist Igal Brener made a metamaterial that mixes two lasers to produce 11 colors ranging from the near infrared, through the colors of the rainbow, to ultraviolet. Research on the new light-mixing metamaterial was published in Nature Communications earlier today.

A multicolor laser pointer you can use to change the color of the laser with a button click — similar to a multicolor ballpoint pen — is one step closer to reality thanks to a new tiny synthetic material made at Sandia National Laboratories.

A flashy laser pointer may be fun to envision, but changing the color of a laser has many other uses from discovering hidden archeology sites in dense forests and detecting signs of extraterrestrial life in the air to potentially speeding up and increasing the capacity of long-distance communication via fiber-optics networks.

Research on the new light-mixing metamaterial was published in Nature Communicationsearlier today. The work was led by Sandia Senior Scientist Igal Brener along with collaborators at Friedrich Schiller University Jena. The paper reports how a metamaterial made up of an array of nanocylinders mixed two laser pulses of near infrared light to produce 11 waves of light ranging in color from the near infrared, through the colors of the rainbow, to ultraviolet.

A metamaterial is a material made up of tiny, repeating structures that interact with electromagnetic waves in ways conventional materials cannot. The structures are much smaller than the wavelength of light they are designed to manipulate. They are somewhat similar to the natural structures that give blue morpho butterfly wings their spectacular iridescence. The wings have scales with tiny repeating structures, which reflect light to produce the blue color.

For this optical mixer, the array of nanocylinders is made from gallium arsenide, a semiconductor used in many kinds of electronics. Gallium arsenide bends, or refracts, light strongly, which is essential for this kind of metamaterial, said Brener. Each nanocylinder is about 500 nanometers tall — or 100 times smaller than the width of a human hair — with a diameter of about 400 nanometers. They are laid out in a square pattern about 840 nanometers apart from one another.

Current ways to mix light, such as those used for green laser pointers, use specially crafted crystals to perfectly align the light waves to allow mixing, said Brener. This is called phase matching. Because of physical rules, each crystal can only efficiently match the phases of one color of incoming light to produce one different color of light. Sandia’s metamaterial works in a completely different manner.

Instead, the team selected two near infrared lasers with wavelengths tuned to the metamaterial’s resonant frequencies, or the wavelengths that bounce around inside the nanocylinders best, said Polina Vabishchevich, a Sandia postdoctoral appointee and first author on the paper. The light from these two lasers — call them frequencies A and B — mix to produce 11 colors from different mixing products including A+A, A+B, B+B, A+A+B, and A+B+B, among other complex mixing products.

“With this tiny device and two laser pulses we were able to generate 11 new colors at the same time, which is so cool,” said Vabishchevich. “We don’t need to change angles or match phases.”

The metamaterial was made using processes borrowed from semiconductor device fabrication. This fabrication was conducted at several Sandia facilities including Sandia’s Microsystems Engineering, Sciences, and Applications complex and the Center for Integrated Nanotechnologies, a Department of Energy Office of Science user facility jointly operated with Los Alamos National Laboratory.

Though the conversion efficiency for the optical metamixer is very low — for example the resulting red-orange light is very weak compared to the incoming light — Brener believes the efficiency can be greatly improved with further work, perhaps by stacking multiple layers of metamaterial.

Many different kinds of chemical and biological research, from using specialized microscopes to study how diseases evade the immune system to studying the chemistry of combustion to improve vehicle efficiency, require light at specific wavelengths. This optical metamixer could convert light from lasers to a new wavelength where a laser might not be available or allow researchers to switch from one wavelength to another without having to buy a different laser, said Brener.