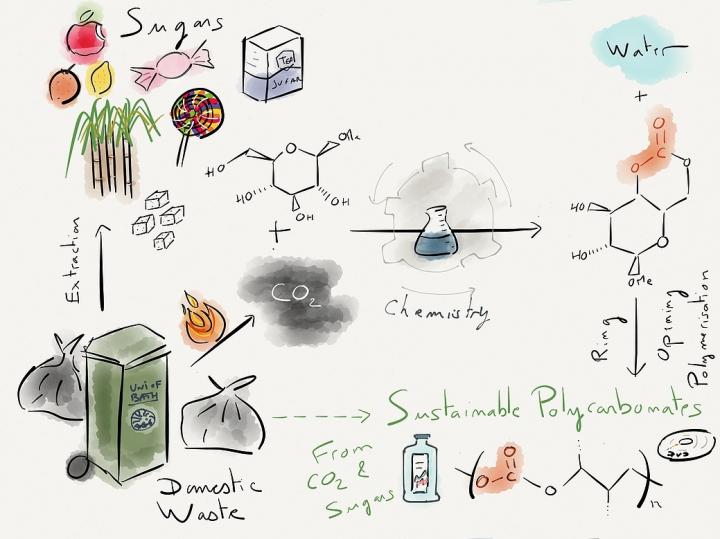 This is a graphic showing how sugar and carbon dioxide is converted to plastic. Source: Georgina Gregory

Some biodegradable plastics could in the future be made using sugar and carbon dioxide, replacing unsustainable plastics made from crude oil, following research by scientists from the Centre for Sustainable Chemical Technologies (CSCT) at the University of Bath.

The resulting plastic has similar physical properties to those derived from petrochemicals, being strong, transparent and scratch-resistant. The crucial difference is that they can be degraded back into carbon dioxide and sugar using the enzymes found in soil bacteria.

The new BPA-free plastic could potentially replace current polycarbonates in items such as baby bottles and food containers, and since the plastic is bio-compatible, it could also be used for medical implants or as scaffolds for growing tissues or organs for transplant.

Dr Antoine Buchard, Whorrod Research Fellow in the University’s Department of Chemistry, said: “With an ever-growing population, there is an increasing demand for plastics. This new plastic is a renewable alternative to fossil-fuel based polymers, potentially inexpensive, and, because it is biodegradable, will not contribute to growing ocean and landfill waste.

“Our process uses carbon dioxide instead of the highly toxic chemical phosgene, and produces a plastic that is free from BPA, so not only is the plastic safer, but the manufacture process is cleaner too.”

Dr Buchard and his team at the Centre for Sustainable Chemical Technologies, published their work in a series of articles in the journals Polymer Chemistry and Macromolecules.

In particular, they used nature as inspiration for the process, using the sugar found in DNA called thymidine as a building block to make a novel polycarbonate plastic with a lot of potential.

PhD student and first author of the articles, Georgina Gregory, explained: “Thymidine is one of the units that makes up DNA. Because it is already present in the body, it means this plastic will be bio-compatible and can be used safely for tissue engineering applications.

“The properties of this new plastic can be fine-tuned by tweaking the chemical structure – for example we can make the plastic positively charged so that cells can stick to it, making it useful as a scaffold for tissue engineering.” Such tissue engineering work has already started in collaboration with Dr Ram Sharma from Chemical Engineering, also part of the CSCT.

The researchers have also looked at using other sugars such as ribose and mannose. Dr Buchard added: “Chemists have 100 years’ experience with using petrochemicals as a raw material so we need to start again using renewable feedstocks like sugars as a base for synthetic but sustainable materials. It’s early days, but the future looks promising.”