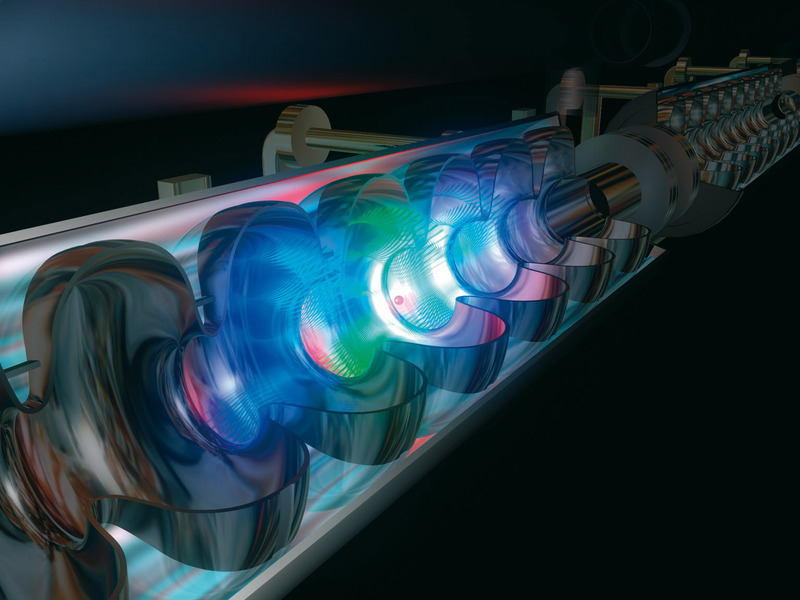 Upgrading x-ray lasers – a mechanical trick can be used to narrow the spectrum of the pulses emitted by x-ray lasers such as the XFEL free electron laser shown here. This would enable x-ray lasers to be used for experiments which would otherwise not be possible, for example testing whether physical constants are really constant. © DESY, Hamburg

X-rays make the invisible visible: they permit the way materials are structured to be determined all the way down to the level of individual atoms. In the 1950s it was x-rays which revealed the double-helix structure of DNA. With new x-ray sources, such as the XFEL free-electron laser in Hamburg, it is even possible to “film” chemical reactions. The results obtained from studies using these new x-ray sources may be about to become even more precise. A team around Kilian Heeg from the Max Planck Institute for Nuclear Physics in Heidelberg has now found a way to make the spectrum of the x-ray pulses emitted by these sources even narrower. In contrast to standard lasers, which generate light of a single colour and wavelength, x-ray sources generally produce pulses with a broad spectrum of different wavelengths. Sharper pulses could soon drive applications that were previously not feasible. This includes testing physical constants and measuring lengths and times even more precisely than can be achieved at present.

Researchers use light and other electromagnetic radiation for developing new materials at work in electronics, automobiles, aircraft or power plants, as well as for studies on biomolecules such as protein function. Electromagnetic radiation is also the tool of choice for observing chemical reactions and physical processes in the micro and nano ranges. Different types of spectroscopy use different individual wavelengths to stimulate  characteristic oscillations in specific components of a structure. Which wavelengths interact with the structure – physicists use the term resonance – tells us something about their composition and how they are constructed; for example, how atoms within a molecule are arranged in space.

In contrast to visible light, which has a much lower energy, x-rays can trigger resonance not just in the electron shell of an atom, but also deep in the atomic core, its nucleus. X-ray spectroscopy therefore provides  unique knowledge about  materials. In addition, the resonances of some atomic nuclei are very sharp, in principle allowing extremely precise measurements.

Modern x-ray sources such as the XFEL free electron laser in Hamburg and the PETRA III (Hamburg), and ESRF (Grenoble) synchrotron sources are prime candidates for carrying out such studies. Free- electron lasers in particular are optimized for generating very short x-ray flashes, which are primarily used to study very fast processes in the microscopic world of atoms and molecules. Ultra short light pulses, however, in turn have a broad spectrum of wavelengths. Consequently, only a small fraction of the light is at the right wavelength to cause resonance in the sample. The rest passes straight through the sample, making spectroscopy of sharp resonances rather inefficient.

It is possible to generate a very sharp x-ray spectrum – i.e. x-rays of a single wavelength – using filters; however, since this involves removing unused wavelengths, the resulting resonance signal is still weak.

The new method developed by the researchers in Heidelberg delivers a three to four-fold increase in the intensity of the resonance signal. Together with scientists from DESY in Hamburg and ESRF in Grenoble, Kilian Heeg and Jörg Evers from Christoph Keitel’s Division and a team around Thomas Pfeifer at the Max Planck Institute for Nuclear Physics in Heidelberg have succeeded in making some of the x-ray radiation that would not normally interact with the sample contribute to the resonance signal. They have successfully tested their method on iron nuclei both at the ESRF in Grenoble and at the PETRA III synchrotron of DESY in Hamburg.

A tiny jolt amplifies the radiation

The researchers’ approach to amplifying the x-rays is based on the fact that, when x-rays interact with iron nuclei (or any other nuclei) to produce resonance, they are re-emitted after a short delay. These re-emitted x-rays then lag exactly half a wavelength behind that part of the radiation which has passed straight through. This means that the peaks of one wave coincide exactly with the troughs of the other wave, with the result that they cancel each other out. This destructive interference attenuates the X-ray pulses at the resonant wavelength, which is also the fundamental origin of absorption of light.

“We utilize the time window of about 100 nanoseconds before the iron nuclei re-emit the x-rays,” explains project leader Jörg Evers. During this time window, the researchers move the iron foil by about 40 billionths of a millimetre (0.4 angstroms). This tiny jolt has the effect of producing constructive interference between the emitted and transmitted light waves. “It’s as if two rivers, the waves on one of which are offset by half a wavelength from the waves on the other, meet,” says Evers, “and you shift one of the rivers by exactly this distance.” This has the effect that, after the rivers meet, the waves on the two rivers move in time with each other. Wave peaks coincide with wave peaks and the waves amplify, rather than attenuating, each other. This trick, however, does not just work on light at the resonance wavelengths, but also has the reverse effect (i.e. attenuation) on a broader range of wavelengths around the resonance wavelength. Kilian Heeg puts it like this. “We squeeze otherwise unused x-ray radiation into the resonance.”

To enable the physicists to move the iron foil fast enough and precisely enough, it is mounted on a piezoelectric crystal. This crystal expands or contracts in response to an applied electrical voltage. Using a specially developed computer program, the Heidelberg-based researchers were able to adjust the electrical signal that controls the piezoelectric crystal to maximize the amplification of the resonance signal.

The researchers see a wide range of potential applications for their new technique. According to Thomas Pfeifer, the procedure will expand the utility of new high-power x-ray sources for high-resolution x-ray spectroscopy. This will enable more accurate modelling of what happens in atoms and molecules. Pfeifer also stresses the utility of the technique in metrology, in particular for high-precision measurements of lengths and the quantum-mechanical definition of time. “With x-rays, it is possible to measure lengths 10,000 times more accurately than with visible light,” explains Pfeifer. This can be used to study and optimize nanostructures such as computer chips and newly developed batteries. Pfeifer also envisages x-ray atomic clocks which are far more precise than even the most advanced optical atomic clocks nowadays based on visible light.

Not least, better X-ray spectroscopy could enable us to answer one of physics’ great unanswered questions – whether physical constants really are constant or whether they change slowly with time. If the latter were true, resonance lines would drift slowly over time. Extremely sharp x-ray spectra would make it possible to determine whether this is the case over a relatively short period.

Evers reckons that, once mature, the technique would be relatively easy to integrate into experiments at DESY and ESRF. “It should be possible to make a shoe-box sized device that could be rapidly installed and, according to our calculations, could enable an approximately 10-fold amplification,” he adds.