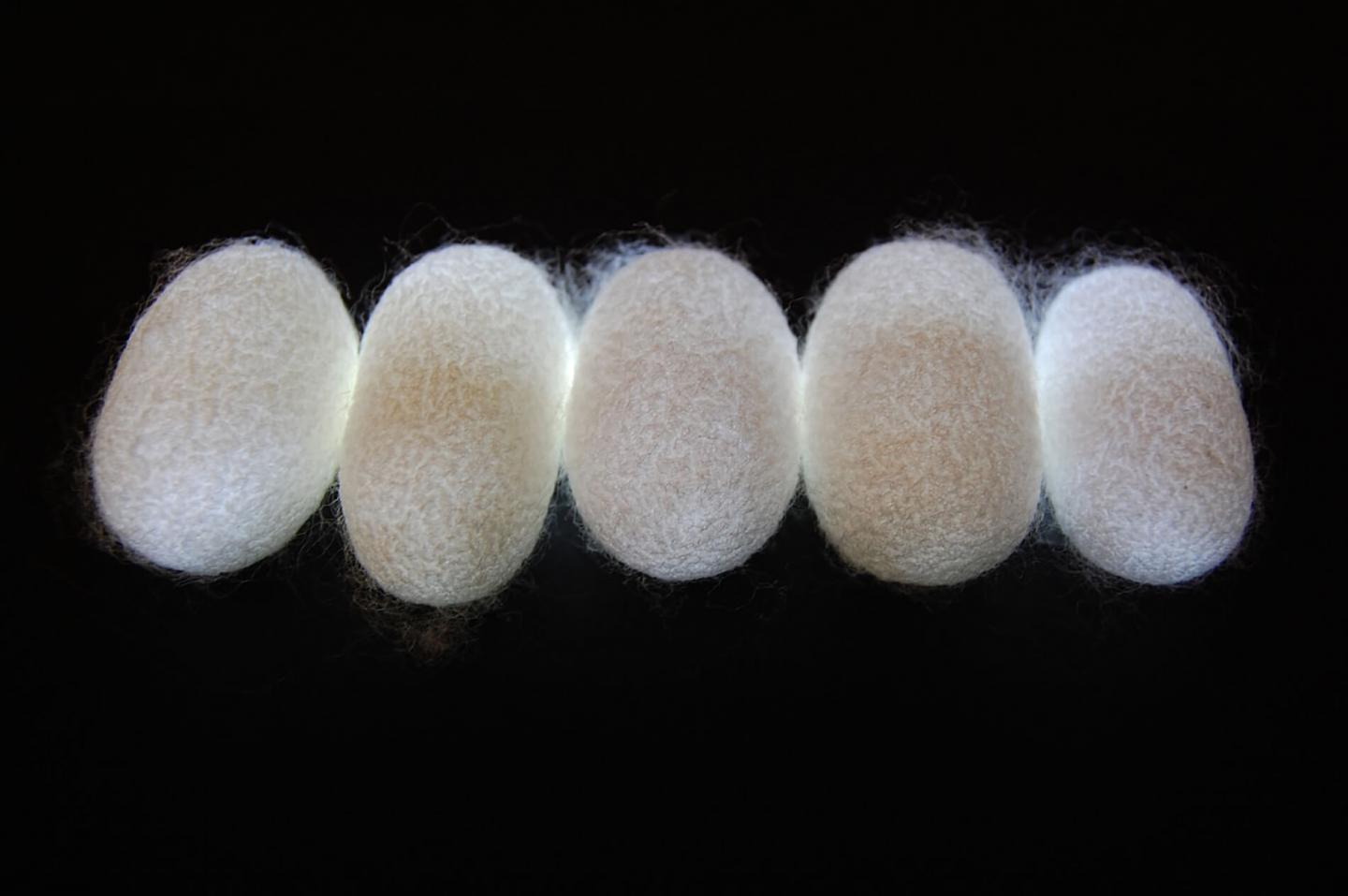 New research has demonstrated how the nano-architecture of a silkworm’s fiber causes “Anderson localization of light,” a discovery that could lead to various innovations and a better understanding of light transport and heat transfer.

The discovery also could help create synthetic materials and structures that realize the phenomenon, named after Nobel laureate Philip Anderson, whose theory describes how electrons can be brought to a complete halt in materials due to their “scattering and defects.” The new findings relate not to electrons, but to light transport.

Researchers demonstrated how the nano-architecture of the silk fibers is capable of light “confinement,” a trait that could provide a range of technological applications including innovations that harness light for new types of medical therapies and biosensing. This light-confinement effect in biological and natural tissue, which was unexpected, is made possible by the Anderson localization of light, said Young Kim, an associate professor in Purdue University’s Weldon School of Biomedical Engineering.

Various research groups have created synthetic “metamaterials” capable of the ultra-efficient control of light. However, metamaterials have limitations because they are often difficult to scale up for commercial production and pose other challenges. Because silk’s nano-architecture is “disordered” instead of meticulously designed periodic structures, the findings suggest a strategy to produce metamaterials that are less expensive to fabricate and manufacture and easier to scale up for industry.

“This is fascinating because realizing Anderson localization of light is extremely challenging, yet we now know that it can be achieved using irregular, disordered nanostructures to create highly packed nanomaterials for strong light scattering as a silkworm produces a silk fiber and spins a cocoon shell in nature,” Kim said.

The findings are detailed in a paper appearing on Wednesday (Jan. 31) in the journal Nature Communications. The paper’s lead author is Purdue postdoctoral research associate Seung Ho Choi.

“Our findings could open up new possibilities for metamaterials and metastructures,” said Kim, who is leading research to better understand the underlying reasons for silk’s white, silvery and lustrous reflection. “I know this is an oxymoron, but we are saying silk fibers represent ‘natural metamaterials’ and ‘natural metastructures.'”

A silk fiber has numerous “scattering centers” inside. Anderson localization arises from this light scattering due to disorder in the nanostructure.

“Silk has many nanofibrils, which individually scatter light,” Kim said.

For the Anderson localization to occur, there must be both scattering and interference between scattered light waves. Densely packed irregular nanostructures cause light waves to interfere with each other, sometimes in destructive and sometimes in constructive ways. If constructive, the light is intensified.

“If waves are constructively interfering, this forms a very high energy inside the disordered media,” Choi said.

The small size and roughly parallel arrangement of the nanofibrils are conducive to the effect. The scattering power is maximized when there are many scattering centers and when their size is comparable to the wavelength of the light, both criteria found in the silk fibers.

Whereas commercial optical fibers must be specially engineered with a reflective coating, or cladding, to allow for the confinement of light, the silk fibers are able to achieve the feat naturally due to Anderson localization of light. The Anderson localization creates “modes” that make confinement of light possible without carefully engineered periodic structures. Instead, the same confinement is possible with disordered, more random designs.

“We found that most transmission of light disappears in most of the silk surface. However, counterintuitively, in a small area we found that the energy is confined, and this confined energy is transmitted through localized modes,” Kim said. “The localized mode is a unique pathway for energy flow.”

Although biological structures such as silk diffuse light, other natural materials with similar microstructures do not possess the localized, modes making Anderson localization of light possible.

“Such a difference makes silk particularly interesting for radiative heat transfer.” Kim said. The silk has a high emissivity for infrared light, meaning it readily radiates heat, or infrared radiation, while at the same time being a good reflector of solar light. Because the strong reflectivity from Anderson localization is combined with the high emissivity of the biomolecules in infrared radiation, silk radiates more heat than it absorbs, making it ideal for passive, or “self-cooling.”

“You may have heard that silk underwear can keep you cooler in summertime and warmer in winter,” Kim said. “We have learned the basic mechanism behind this observation.”

The work is led by researchers in Purdue’s Weldon School of Biomedical Engineering; the Department of Agricultural Biology of the National Institute of Agricultural Sciences in South Korea; and the Materials and Manufacturing Directorate of the U.S. Air Force Research Laboratory. A complete list of co-authors is available in the abstract.

“Our findings could open up largely unexplored opportunities for engineering, energy, and biomedical areas,” Kim said. “However, while direct applications could be possible, we really want to learn from silk to help develop material synthesis and design processes in the future.”