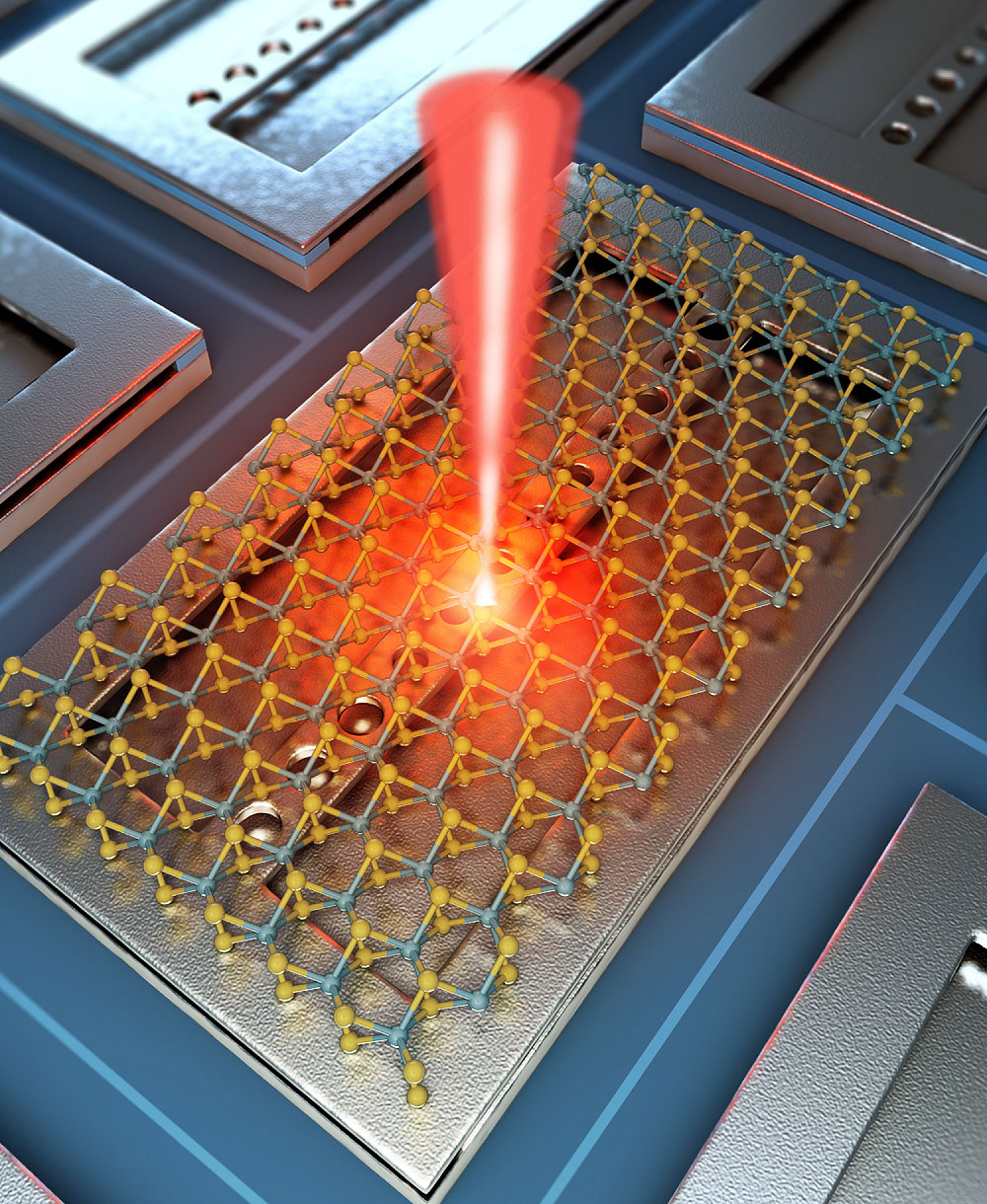 For the first time, researchers have built a nanolaser that uses only a single molecular layer, placed on a thin silicon beam, which operates at room temperature. The new device, developed by a team of researchers from Arizona State University and Tsinghua University, Beijing, China, could potentially be used to send information between different points on a single computer chip. The lasers also may be useful for other sensing applications in a compact, integrated format.

“This is the first demonstration of room-temperature operation of a nanolaser made of the single-layer material,” said Cun-Zheng Ning, an ASU electrical engineering professor who led the research team. Details of the new laser are published in the July online edition of Nature Nanotechnology.

Ning said pivotal to the new development is use of materials that can be laid down in single layers and efficiently amplify light (lasing action). Single layer nanolasers have been developed before, but they all had to be cooled to low temperatures using a cryogen like liquid nitrogen or liquid helium. Being able to operate at room temperatures (~77 F) opens up many possibilities for uses of these new lasers,” Ning said.

The joint ASU-Tsinghua research team used a monolayer of molybdenum ditelluride integrated with a silicon nanobeam cavity for their device. By combining molybdenum ditelluride with silicon, which is the bedrock in semiconductor manufacturing and one of the best waveguide materials, the researchers were able to achieve lasing action without cooling, Ning said.

A laser needs two key pieces – a gain medium that produces and amplifies photons, and a cavity that confines or traps photons. While such materials choices are easy for large lasers, they become more difficult at nanometer scales for nanolasers. Nanolasers are smaller than 100th of the thickness of the human hair and are expected to play important roles in future computer chips and a variety of light detection and sensing devices.

The choice of two-dimensional materials and the silicon waveguide enabled the researchers to achieve room temperature operation. Excitons in molybdenum telluride emit in a wavelength that is transparent to silicon, making silicon possible as a waveguide or cavity material. Precise fabrication of the nanobeam cavity with an array of holes etched and the integration of two-dimensional monolayer materials was also key to the project. Excitons in such monolayer materials are 100 times stronger than those in conventional semiconductors, allowing efficient light emission at room temperature.

Because silicon is already used in electronics, especially in computer chips, its use in this application is significant in future applications.

“A laser technology that can also be made on Silicon has been a dream for researchers for decades,” said Ning. “This technology will eventually allow people to put both electronics and photonics on the same silicon platform, greatly simplifying manufacture.”

Silicon does not emit light efficiently and therefore must be combined with other light emitting materials. Currently, other semiconductors are used, such as Indium phosphide or Indium Garlium Arsenide which are hundreds of times thicker, to bond with silicon for such applications.

The new monolayer materials combined with Silicon eliminate challenges encountered when combining with thicker, dissimilar materials. And, because this non-silicon material is only a single layer thick, it is flexible and less likely to crack under stress, according to Ning.

Looking forward, the team is working on powering their laser with electrical voltage to make the system more compact and easy to use, especially for its intended use on computer chips.