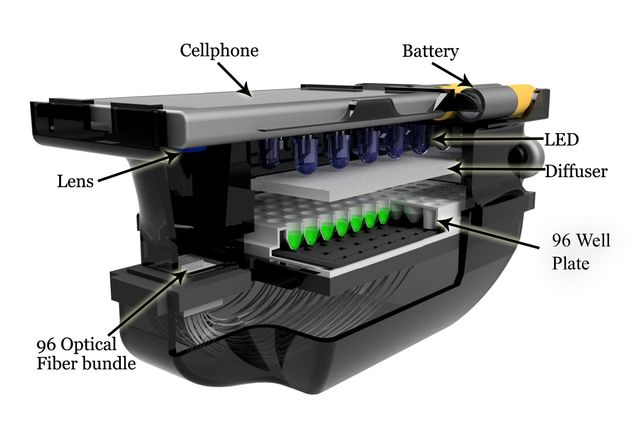 A schematic shows a smartphone and the diagnostic attachment for antimicrobial susceptibility testing. Image: Aydogan Ozcan/UCLA

A team of UCLA researchers has developed an automated diagnostic test reader for antimicrobial resistance using a smartphone. The technology could lead to routine testing for antimicrobial susceptibility in areas with limited resources.

Antimicrobial-resistant bacteria are posing a severe threat to global public health. In particular, they are becoming more common in bacterial pathogens responsible for high-mortality diseases such as pneumonia, diarrhea, and sepsis.

Part of the challenge in combatting the spread of these organisms has been the limited ability to conduct antimicrobial susceptibility testing in regions that do not have access to labs, testing equipment and trained diagnostic technicians to read such tests.

The UCLA researchers have developed a simple and inexpensive smartphone attachment that can conduct automated antimicrobial susceptibility testing. The research results were published in the journal Scientific Reports, part of the Nature Publishing Group.

“This work is extremely important and timely, given that drug-resistant bacteria are increasingly becoming a global threat rendering many of our first-line antibiotics ineffective,” says Aydogan Ozcan, Chancellor’s Professor of Electrical Engineering and Bioengineering at the UCLA Henry Samueli School of Engineering and Applied Science. “Our new smartphone-based technology can help put laboratory-quality testing into much wider adoption, especially in resource-limited regions.”

This collaborative interdisciplinary project involved the UCLA research labs of three professors — Ozcan; Omai Garner, an assistant professor of pathology and laboratory medicine in Health Sciences; and Dino Di Carlo, a professor of bioengineering in Engineering.

The UCLA device connects to a smartphone and has a plate that can hold up to 96 wells for testing. An array of LEDs illuminates the sample and then the phone’s camera is used to sense small changes in light transmission of each well containing a different dose selected from a panel of antibiotics. Images are sent to a server to automatically perform antimicrobial susceptibility testing and the results are returned to the smartphone in about one minute.

The researchers then tested the device in clinical settings at UCLA. They used special plates prepared with 17 different antibiotics targeting Klebsiella pneumoniae, a bacteria containing highly resistant antimicrobial profiles. During the clinical tests, they used 78 samples from patients. Their results showed that the mobile-phone-based reader meets the FDA-defined criteria for laboratory testing, with a detection accuracy of 98.2 percent.

The lowest concentration of antibiotic that prevented the growth of bacteria is used to track drug resistance. A criterion — that is susceptible to antibiotics or resistant to them — is assigned to each bacteria/drug combination in order to guide the physician in treatment decisions. A susceptible result indicates that the organisms that have infected the patient should respond to therapy, while a resistant organism will not be inhibited by the concentrations of antibiotic achieved with normal dosages used for that drug.

“This mobile reader could eliminate the need for trained diagnosticians to perform antimicrobial susceptibility testing, reduce the cost barrier for routine testing, and assist in tracking of bacterial resistance globally,” Garner says.

Di Carlo adds, “An additional advantage of this technology is the possibility of examining bacterial growth in the presence of a drug at an earlier time point than is currently read, (about 24 hours). This could allow for a more rapid turnaround time of the results to the physician, which might help save lives.”

The other authors of the paper include research engineers Steve Feng and Derek Tseng, members of Ozcan’s lab.

Ozcan and Di Carlo both have faculty appointments at the California NanoSystems Institute (CNSI). Ozcan also has an appointment in the Department of Surgery at the David Geffen School of Medicine at UCLA.

The research was supported by the National Science Foundation and the Howard Hughes Medical Institute. Part of this technology has been licensed by Cellmic, a start-up company co-founded by Ozcan, which aims to commercialize computation microscopy, sensing and diagnostic tools.