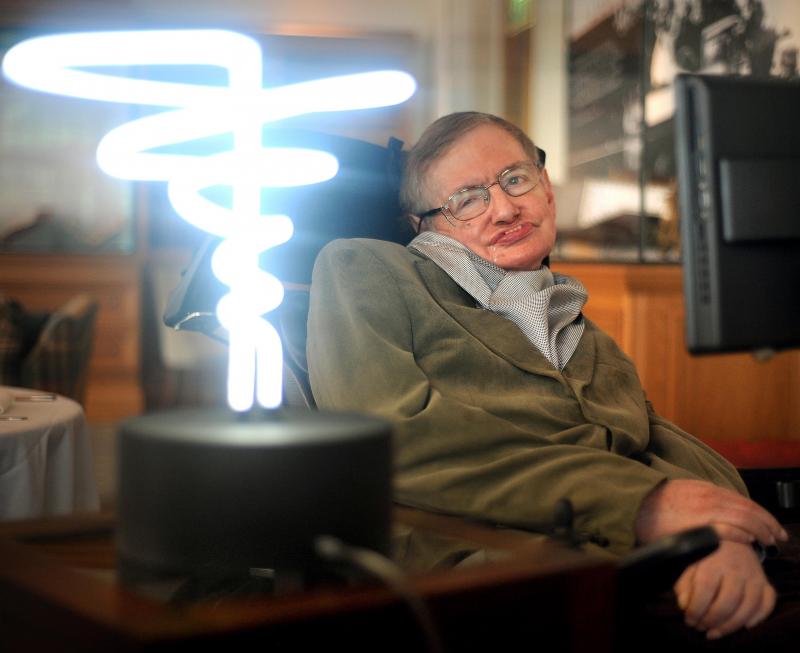 In this Feb. 25, 2012 photo, Professor Stephen Hawking poses beside a lamp titled ‘black hole light’ by inventor Mark Champkins, presented to him during his visit to the Science Museum in London. Photo: Anthony Devlin/PA via AP

Stephen Hawking, the British physicist who became the most-recognized figure associated with scientific genius, lived most of his life under the specter of death.

While still a student of cosmology at the University of Cambridge at age 21, he was diagnosed with amyotrophic lateral sclerosis – and given just two years to live.

Hawking died at his home today, more than a half century later, at the age of 76 – and only after revolutionizing the thought surrounding black holes and other fundamental features of the universe, authoring bestselling books, having a family, and becoming an instantly-recognizable celebrity who was the subject of a major film biopic.

Hawking’s cause of death was not immediately clear but he had been in a wheelchair since 1969, and was unable to speak since 1985, due to the progressive nature of his disease, the affliction also known as Lou Gehrig’s disease.

But it was that very condition that may have spurred him into taking his studies more seriously – and leaving his mark on the world, he had said over the course of his life.

“Before my condition was diagnosed, I had been very bored with life,” he once said, estimating that he had only been spending an hour a day truly focusing on his education. “There had not seemed to be anything worth doing.”

But that would change.

A scientific life
Stephen Hawking was born on Jan. 8, 1942, the eldest of four children raised by Frank and Isobel Hawking. Both his parents were Oxford University graduates – his mother graduating in the 1930s, when few women were admitted, and his father was a noted medical researcher specializing in tropical diseases. The family reportedly had diverse interests, including beekeeping in their basement and making fireworks in the greenhouse of their St. Albans home, according to accounts.

Hawking was not an exceptional student to begin with, having instead been focused on board games, and constructing a computer to solve mathematics problems with his friends as a teen. But family members remarked on his fascination with the sky and the stars – and his mother remembered that he would often lay out in the backyard of his home on summer nights to look up at the firmament.

After his diagnosis, Hawking earned his doctorate in cosmology from Cambridge – and then trained his full focus on the skies.

His first major breakthrough was in 1974, when he put forth his theory that black holes were not all-consuming vacuums, and radiation could escape its gravitational force. The work was done partly through a partnership with Roger Penrose, another cosmologist.

Hawking’s research took off in his early 30s. He was a Royal Society fellow the same year he published his first black hole theory, and he went onto to earn prestigious awards including the Albert Einstein Award, the Hughes Medal, and the Copley Medal, among a litany of others.

Hawking also taught at Caltech and other institutions, as well as at Cambridge – where he was named the Lucasian Professor of Mathematics.

Hawking’s deep dive into the nature of black holes continued throughout his career. Most recently, he published an open-access paper at the beginning of 2016 that held that black holes have “soft hair” – a ghostlike quantum state of matter in two dimensions called “the information” which exists at the event horizon.

A pop culture icon
With the professional accolades came the wider recognition from popular sources beyond science. Hawking was the subject of a documentary in 1992. He experienced zero-gravity in 2007 aboard a modified Boeing 727 above the Atlantic Ocean. He was a guest star on TV shows like “The Simpsons” and “The Big Bang Theory.” A film called “The Theory of Everything” was released to wide acclaim in 2014. Two years ago, he even hosted a six-part TV series called ”Genius,” which asked everyday volunteers to tackle age-old scientific questions.

Hawking also weighed in on the long-term dangers facing humanity. He warned about the hazards of uncontrolled artificial intelligence, and also publicly threw his support behind the “Breakthrough Initiatives” to find extraterrestrial life. Over the last few years, his insight was sought after by policymakers, scientists, and reporters alike. Hawking retained the ability to capture the public imagination with seemingly no effort at all. Last October, his doctoral thesis at Cambridge was made freely available in the school library’s open access collection – and it quickly crashed the site.

Although known for his sense of humor, Hawking also had a certain cynicism about humanity’s ultimate fate if the species were to remain solely on Earth.

“We face a number of threats: nuclear war, global warming and genetically engineered viruses,” he said. “Although the chance of a disaster on planet Earth in a given year may be quite low, it adds up over time, to a near certainty in the next 1,000 or 10,000 years.”

The condolences and statements on Hawking’s death today – which is also the 139th birthday of Albert Einstein, his most famous predecessor – continue to pour in. Lawrence M. Krauss, a noted American theoretical physicist, said “a star just went out in the cosmos.” The president of the Royal Society in the United Kingdom, Venki Ramakrishnan, added that “he will be sorely missed.”

“We are deeply saddened that our beloved father passed away today,” said Hawking’s three children in a statement. “He was a great scientist and an extraordinary man whose work and legacy will live on for many years. His courage and persistence with his brilliance and humor inspired people across the world.”