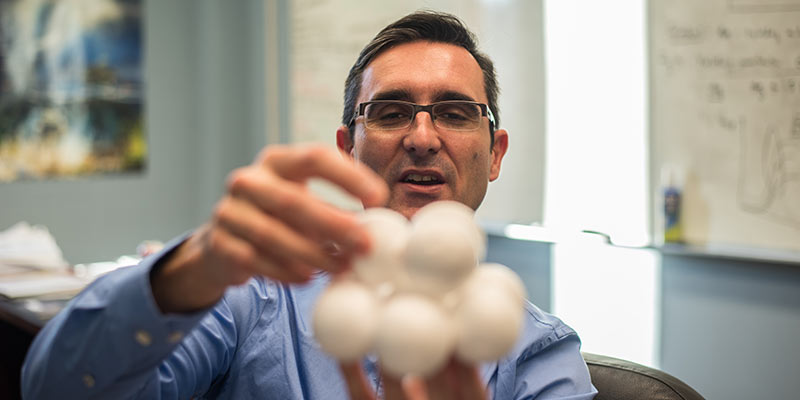 Professor of mechanical engineering Frederic Sansoz shows how atoms of silver are arranged. He’s part of a team of scientists that has discovered that silver wires, between about 10 and 40 nanometers wide, have an amazing combination of super-strength and stretchiness. The new research uncovered a weird state of matter in silver—that may have many technological uses. (Photo: Joshua Brown)

Try bending your iPhone in half. Or roll up your tablet like a scroll. Or wrap a touchscreen TV around a pole. Didn’t work out so well, did it? That’s because the ceramic material used to make many of today’s touchscreens has only two of three needed qualities: it’s conductive, it’s transparent—but it’s not flexible.

“It’s brittle and so if you bend it, it breaks,” says University of Vermont scientist Frederic Sansoz, a professor of mechanical engineering.

But Sansoz and a team of other scientists have made a discovery that may change that. Working with silver at a vanishingly small scale—nanowires just a few hundred atoms thick—they discovered that they could make wires that were both super strong “and stretchy like gum,” he says.

This kind of silver wire could be fashioned into a mesh that conducts current, allows light to shine through—and bends so easily “you might be able to tie your smartphone into a knot,” he says.

Or, as they write in their study, “we report unusual room-temperature super-elongation without softening in face-centered-cubic silver nanocrystals.”

The team’s results were published in the April issue of the journal Nature Materials.

UVM’s Sansoz, his collaborator Scott Mao at the University of Pittsburgh, and their colleagues have led pioneering research on how to transform soft metals, including gold, into super-strong wires at the nanoscale. It’s part of a growing area of research that shows that as materials are engineered to be smaller and smaller it’s possible to eliminate many defects at the atomic scale. “And this makes them much stronger,” he says, “generally, smaller is stronger.”

But there’s a problem. “As you make them stronger, they become brittle. It’s chewing gum versus window glass,” Sansoz says.

Which is why he was very surprised by what the team discovered about silver.

As wires of silver are made smaller and smaller, down to about 40 nanometers, they follow the expected trend: they get relatively stronger and more brittle. But earlier research by other scientists had shown that at even-more-extreme smallness—below 10 nanometers—silver does something weird. “It behaves like a Jello gelatin dessert,” Sansoz say. “It becomes very soft when compressed, has very little strength, and slowly returns to its original shape.”

Materials scientists hypothesize this happens because the crystals of silver are so small that most of their atoms are at the surface, with very few interior atoms. This allows diffusion of individual atoms from the surface to dominate the behavior of the metal instead of the cracking and slipping of organized lattices of atoms within. This causes these tiniest, but solid, silver crystals to have liquid-like behavior even at room temperature.

“So our question was: what’s happening in the gap between 10 nanometers and 40 nanometers?” says Sansoz. “This is the first study to look at this range of diameters of nanowires.”

What the team of scientists found in the gap—using both an electron microscope and atomistic models on a supercomputer—is that “the two mechanisms coexist at the same time,” Sansoz says. This gives silver wires in that little-explored zone both the strength of the “smaller-is-stronger” principle with the liquid-like weirdness of their smaller cousins.  At this Goldilocks-like size, when defects form at the surface of the wire as it’s pulled apart, “then diffusion comes in and heals the defect,” Sansoz says. “So it just stretches and stretches and stretches—elongating up to two hundred percent.”

There has been remarkable progress since 2010 in applying silver nanowires in electronics, Sansoz says, including conductive electrodes for touchscreen displays. And some companies are working hard to apply these wires to creating cost-effective flexible screens. “But, right now, they’re manufacturing totally in the dark,” Sansoz says. “They don’t know what size wire is best.” His new discovery should give chemists and industrial engineers a target size for creating silver wires that could lead to the first foldable phones.