What if everything “smart” about your smartwatch was in the band?

The researchers are teaming up with Genevieve Dion, director of the Shima Seiki Haute Technology Lab at Drexel University, with the goal of making a new kind of wearable health tracking device: where the “smarts” are embedded in the fabric itself.

The team recently received a $100,000 grant from the Keck Futures Initiative — a project of the National Academies of Sciences, Engineering, and Medicine that supports forward-thinking, highly interdisciplinary collaborations — to develop a garment that gathers health information from its wearer through his or her sweat. They plan to achieve this by spinning nanotechnology-inspired yarn that can be knitted like its conventional counterparts.

Instead of just wicking sweat away, the team’s yarn will be able to chemically analyze its contents and change color accordingly. 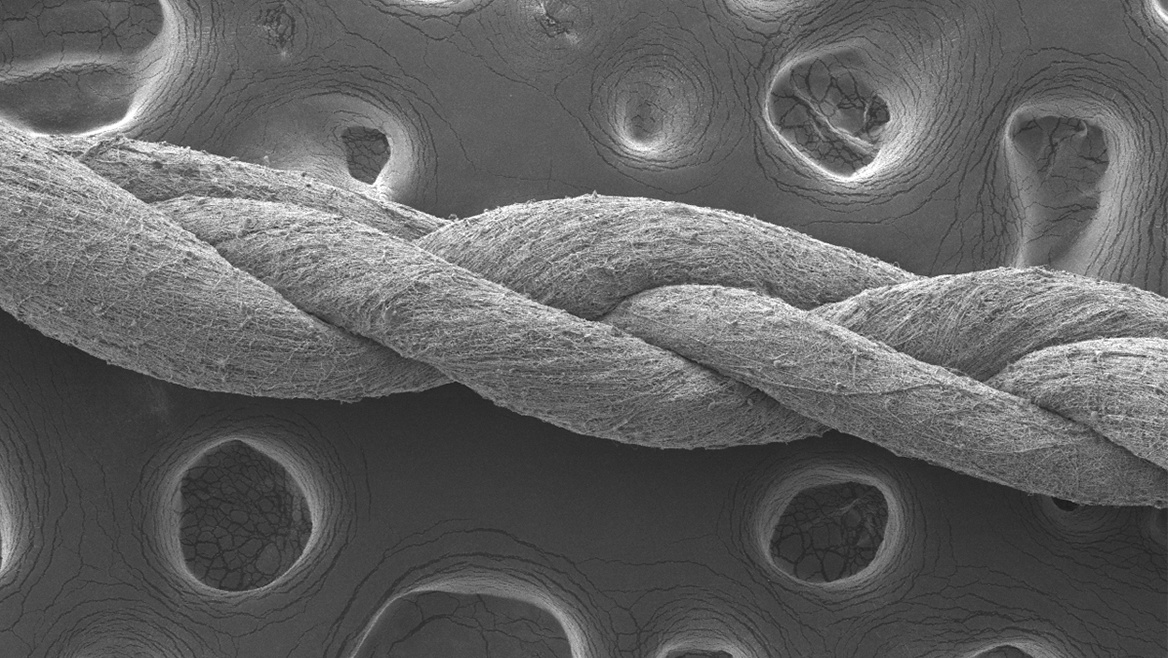 A Penn-Drexel collaboration aims to develop a garment, knitted out of “smart” yarn, that will chemically analyze the wearer’s sweat. Weerapha Panatdasirisuk, a student in the Yang Lab, has already hand-knit the first strands of the team’s nanoscale yarn into braids.

Wearable technology requires materials that are both flexible and functional, so developers often look to polymers or to make harder materials as thin as possible.

“Those materials aren’t a good fit for something that goes directly on your skin because they don’t breathe,” Yang says. “So we’re taking inspiration from clothing, and making new materials that can be knitted together.”

The challenge will be to make a yarn that works like spiracles, the tiny holes in insects’ abdomens through which they breathe, or xylem, the tissue in trees that transports water from the roots to the leaves. Both systems must deal with an unpredictable mix of air and water without clogging.

“We’d then coat the insides of this yarn with chemistry that’s specific to different ions found in sweat,” Kamien says. “The concentrations of those ions could then be read out from color changes in the yarn itself. That might be able to tell you if you were at risk for heat stroke, for example.”

The team plans to use dyes that fluoresce different colors under black light, but a system that uses color-changing liquid crystals, like the ones found in adhesive thermometers, might also be possible.

The project fits into the aims of AESOP, or Analyzing Evolved Structures as Optimized Products, a research center established last year by Yang, Kamien, and a host of colleagues from SAS, Penn Engineering, and PennDesign. AESOP looks to the natural environment for insight into how to better design and manufacture materials for built environments.

One of the three main thrusts of AESOP is to develop new ways of scaling up manufacturing techniques, something the Keck project will put to the test. Yang’s students have already made meter-long strands of yarn, but will need to get to nine meters before they can use Dion’s industrial knitting machines to make a functional garment.

“Working in nanotechnology,” Yang says, “we’re used to scaling up to things that are measured in millimeters or centimeters. If you want to make functional products for the human habitat, you need to go much bigger.”