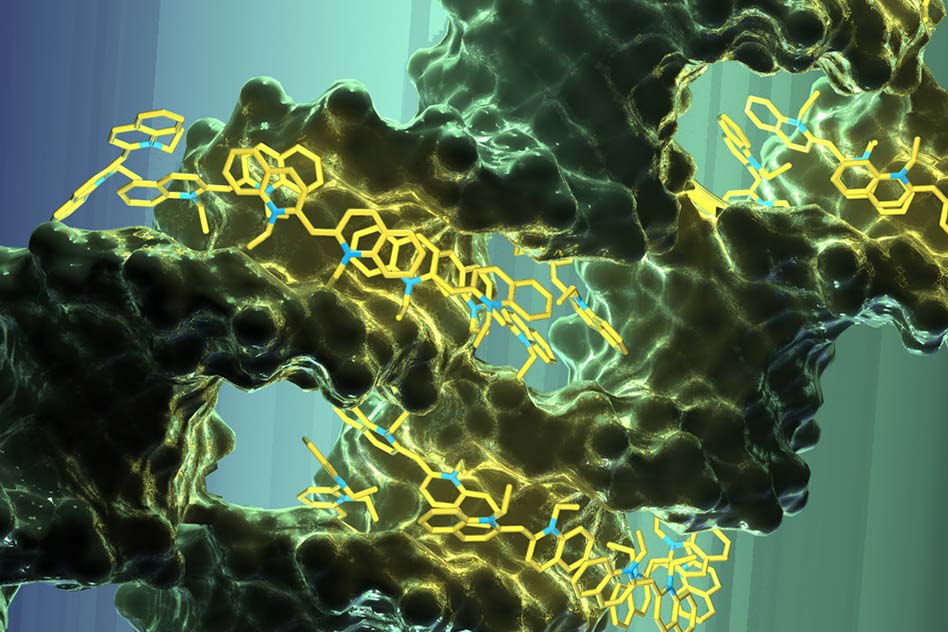 By organizing pigments on a DNA scaffold, an MIT-led team of researchers has designed a light-harvesting material that closely mimics the structure of naturally occurring photosynthetic structures. Courtesy of the researchers

By organizing pigments on a DNA scaffold, an MIT-led team of researchers has designed a light-harvesting material that closely mimics the structure of naturally occurring photosynthetic structures.

The researchers showed that their synthetic material can absorb light and efficiently transfer its energy along precisely controlled pathways. This type of structure could be incorporated into materials such as glass or textiles, enabling them to harvest or otherwise control incoming energy from sunlight, says Mark Bathe, an associate professor of biological engineering at MIT.

“This is the first demonstration of a purely synthetic mimic of a natural light-harvesting circuit that consists of densely packed clusters of dyes that are precisely organized spatially at the nanometer scale, as found in bacterial systems,” Bathe says. One nanometer is one billionth of a meter, or 1/10,000 the thickness of a human hair.

Bathe is one of the senior authors of the new study, along with Alan Aspuru-Guzik, a professor of chemistry and chemical biology at Harvard University, and Hao Yan, a professor of chemistry and biochemistry at Arizona State University. Lead authors of the paper, which appears in the Nov. 13 issue of Nature Materials, are former MIT postdoc Etienne Boulais, Harvard graduate student Nicolas Sawaya, and MIT postdoc Rémi Veneziano.

Over billions of years, plants and photosynthetic bacteria have evolved efficient cellular structures for harvesting energy from the sun. This process requires capturing photons (packets of light energy) and converting them into excitons — a special type of quasiparticle that can carry energy. Energy from these excitons is then passed to other molecules at a complex of protein and pigments known as a reaction center, and eventually used by the plant to build sugar molecules.

While scientists have developed reliable techniques for carrying electrons (such as semiconductors) and photons (fiber optics), coming up with ways to control excitons has proven more challenging.

Four years ago, Bathe, Aspuru-Guzik, and Yan began working on synthetic structures that could mimic natural light-harvesting assemblies. These assemblies, usually found in cell organelles called chloroplasts, have an intricate structure that efficiently captures and transports solar energy at the scale of nanometers.

“What’s really amazing about photosynthetic light-harvesting is how well it meets the organism’s needs,” says Gabriela Schlau-Cohen, an MIT assistant professor of chemistry who is also an author of the paper. “When it is required, every absorbed photon can migrate through the network of proteins that surrounds the reaction center, to generate electricity.”

The researchers set out to mimic these structures by attaching light-harvesting pigments to study scaffolds made of DNA. Over the past several years, Bathe’s lab has devised new ways to program DNA to fold in particular shapes, and last year Bathe and his colleagues created a new computer-programming tool that automates the process of designing DNA scaffolds of nearly any shape.

For this study, the researchers wanted to use DNA scaffolds to spatially organize densely packed clusters of pigments similar to those found in nature. Boulais found a 1977 paper that showed that a synthetic pigment called pseudoisocyanine (PIC) aggregates onto specific sequences of naturally occurring DNA to form the type of structure the researchers were seeking, called a J-aggregate. However, because this approach used naturally occurring DNA, there was no way to control the spacing, size, or 3-D spatial organization of the clusters.

Veneziano tested the researchers’ ability to template these J-aggregates into discrete clusters with distinct 2-D organizations using synthetic DNA, and Boulais and Sawaya worked to computationally design customizable, synthetic DNA scaffolds that organize these aggregates into circuits that absorb photons and transport the resulting excitons along a predictable path. By programming specific DNA sequences, the researchers can control the precise location and density of the clusters of dye molecules, which sit on a rigid, double-stranded DNA scaffold. They computationally modeled how factors such as the number of dye molecules, their orientation, and the distances between them would affect the efficiency of the resulting circuits, analyzing many versions of the circuits for their efficiency of energy transfer.

“Photosynthetic organisms organize their light-harvesting molecules precisely using a protein scaffold. Up to now, this kind of structural control has been difficult to realize in synthetic systems. It looks like DNA origami provides a means of mimicking many of the principles of photosynthetic light-harvesting complexes,” says Gregory Scholes, a professor of chemistry at Princeton University who was not involved in the study.

Part of the ASU team, led by co-author Su Lin, performed a series of spectroscopic measurements to demonstrate that the designed DNA structures produced the desired J-aggregates, and to characterize their photophysical properties. Schlau-Cohen, who uses advanced spectroscopy techniques to analyze light-harvesting systems, both natural and synthetic, showed that these dense pigment assemblies were able to efficiently absorb light energy and transport it along specific pathways.

“We demonstrated the ability to control the traffic patterns using J-aggregated dyes, not just how far the excitons can travel. That’s important because it offers versatility in designing such circuits for functional materials,” Bathe says.

“Bottom-up design of excitonics systems has been a focused goal of our Energy Frontiers Research Center (EFRC). I am glad to see an important stepping stone toward demonstrating bottom-up control of exciton flow,” Aspuru-Guzik says. He adds that “multidisciplinary research that tightly couples synthesis, theory, and characterization was required to get to this point.”

The researchers believe that these synthetic structures could be integrated into 2-D and 3-D materials such as glass or textiles, giving those materials the ability to absorb sunlight and convert it into other forms of energy such as electricity, or to otherwise store or harness the energy. The structures might also form a new basis for quantum computers, implemented at the nanoscale, using excitonic circuits as quantum logic gates.

The researchers now plan to explore ways to make these synthetic light-harvesting systems even better, including looking for more efficient pigments, which may lie in the recently announced Max Weaver Dye Library at North Carolina State University, which houses 98,000 unique dyes.

“There are still a lot of ways that we can imagine improving this,” Schlau-Cohen says. “We have the ability to control individual molecular parameters to explore the basic science questions of how can we transport energy efficiently in a disordered material.” Schlau-Cohen is also the senior author of a companion publication that will be published in the Journal of Physical Chemistry Letters next week.