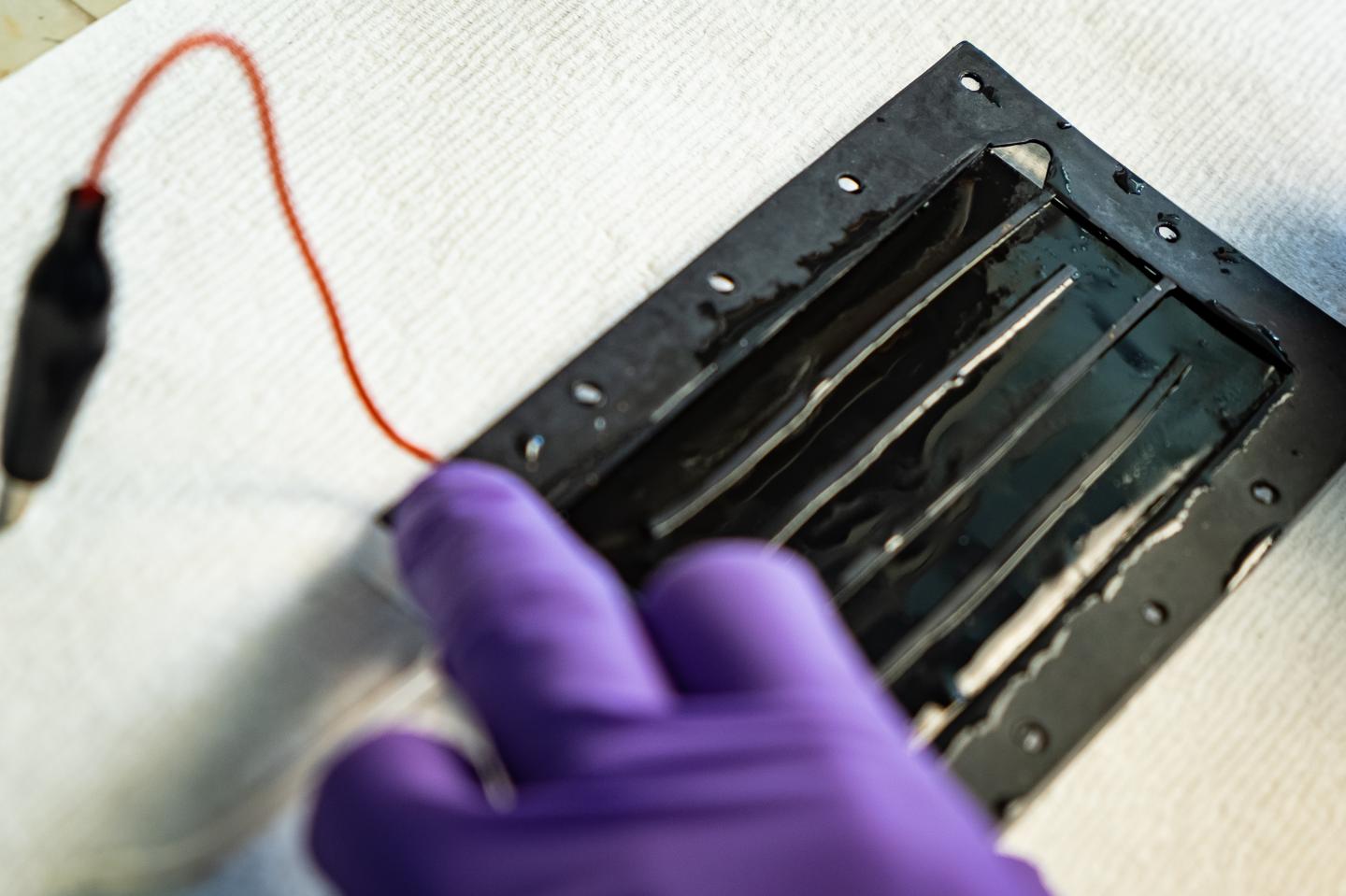 Contaminants can be removed from fluids that traverse a maze-like path between electrodes in a technology developed by Rice University engineers. The photo shows Rice postdoctoral researcher Kuichang Zuo placing a separator that channels water through the system. Credit: Jeff Fitlow/Rice University

Rice University scientists are developing technology to remove contaminants from water – but only as many as necessary.

The Rice lab of engineer Qilin Li is building a treatment system that can be tuned to selectively pull toxins from drinking water and wastewater from factories, sewage systems and oil and gas wells. The researchers said their technology will cut costs and save energy compared to conventional systems.

“Traditional methods to remove everything, such as reverse osmosis, are expensive and energy intensive,” said Li, the lead scientist and co-author of a study about the new technology in the American Chemical Society journal Environmental Science & Technology. “If we figure out a way to just fish out these minor components, we can save a lot of energy.”

The heart of Rice’s system is a set of novel composite electrodes that enable capacitive deionization. The charged, porous electrodes selectively pull target ions from fluids passing through the maze-like system. When the pores get filled with toxins, the electrodes can be cleaned, restored to their original capacity and reused.

“This is part of a broad scope of research to figure out ways to selectively remove ionic contaminants,” said Li, a professor of civil and environmental engineering and of materials science and nanoengineering. “There are a lot of ions in water. Not everything is toxic. For example, sodium chloride (salt) is perfectly benign. We don’t have to remove it unless the concentration gets too high.

“For many applications, we can leave non-hazardous ions behind, but there are certain ions that we need to remove,” she said. “For example, in some drinking water wells, there’s arsenic. In our drinking water pipes, there could be lead or copper. And in industrial applications, there are calcium and sulfate ions that form scale, a buildup of mineral deposits that foul and clog pipes.”

The proof-of-principal system developed by Li’s team removed sulfate ions, a scale-forming mineral that can give water a bitter taste and act as a laxative. The system’s electrodes were coated with activated carbon, which was in turn coated by a thin film of tiny resin particles held together by quaternized polyvinyl alcohol. When sulfate-contaminated water flowed through a channel between the charged electrodes, sulfate ions were attracted by the electrodes, passed through the resin coating and stuck to the carbon.

Tests in the Rice lab showed the positively charged coating on the cathode preferentially captured sulfate ions over salt at a ratio of more than 20 to 1.

The electrodes retained their properties over 50 cycles. “But in fact, in the lab, we’ve run the system for several hundred cycles and I don’t see any breaking or peeling of the material,” said Kuichang Zuo, lead author of the paper and a postdoctoral researcher in Li’s lab. “It’s very robust.”

Li said the system is intended to work with current commercial water-treatment systems. “The true merit of this work is not that we were able to selectively remove sulfate, because there are many other contaminants that are perhaps more important,” she said. “The merit is that we developed a technology platform that we can use to target other contaminants as well by varying the composition of the electrode coating.”

The Rice team is developing coatings for other contaminants and working with labs at the University of Texas at El Paso and Arizona State University on large-scale test systems. Zuo said it should also be possible to scale systems down for in-home water purification.