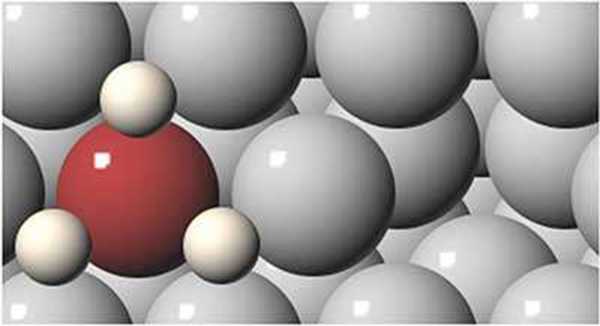 This reaction diagram models the interaction of hydrogen (red sphere) and titanium (white sphere) with aluminum (gray spheres) to form alane. A vacancy in the aluminum surface is shown on the right. (Credit: U.S. Department of Energy)

Scientists at the U.S. Department of Energy’s Ames Laboratory, in collaboration with several partners, have discovered a less-expensive, more energy-efficient way to produce alane – aluminum trihydride – a hydrogen source widely considered to be a technological dead-end for use in automotive vehicles.

Alane had earned its dead-end reputation for use in cars because making it from the elements aluminum and hydrogen at equilibrium requires hydrogen gas at about 150,000 PSI pressure.

Researchers found that atomic-level defects, when present on the surface of aluminum together with hydrogen and titanium, created the conditions necessary for a chemical reaction producing alane to occur, and without the need for hydrogen at tremendously high pressure. While not ready for mainstream synthesis, this work serves as proof of concept of a more efficient and less costly way of producing alane.

“Alane is great because it meets all of the criteria put forth by the Department of Energy for hydrogen fuel cell vehicles for energy capacity, weight, system temperature, and cost,” said Vitalij Pecharsky, Ames Laboratory Scientist and Iowa State University’s Anson Marston Distinguished Professor of Materials Science. “Aluminum is cheap, hydrogen is abundant. There’s just one problem: you can’t make it easily. For the longest time it’s been considered impossible to use for vehicle applications because of the extreme difficulties in producing it.”

Researchers paired the predictive advantages of computational analysis with physical experiment to tackle the applied materials challenge. Along with titanium catalyst dopants and hydrogen, theorists looked at vacancy defects, or missing aluminum, on the surface of aluminum powders and established that this combination working in concert is critical to the low-energy formation of alane. Because such defects can be produced by ball milling to break up mechanically the atomic structure of the metal, experimentalists ball-milled aluminum powders in combination with hydrogen and titanium, and they confirmed the prediction by producing AlH3, or alane. The process used significantly less pressure, only about 5,000 PSI (or 30 times less pressure), to create alane than that needed for equilibrium methods.

“Through the mechanochemistry you create as many vacancies as you can in a powder, which increases the surface area, and the process yields 10 percent alane,” said Duane Johnson, Ames Laboratory Chief Research Officer and F. Wendell Miller Professor of Energy Science at Iowa State University’s department of Materials Science and Engineering. “Alane is light, when it gives up hydrogen and transforms to aluminum it becomes recyclable like aluminum cans, it’s under no pressure, and therefore is safe for vehicle applications. While 10 percent is not yet a commercially viable yield, the science here puts it within reach upon further research and development.”